Books Missing Over Half a Century Found in Deceased Man's Cabinet 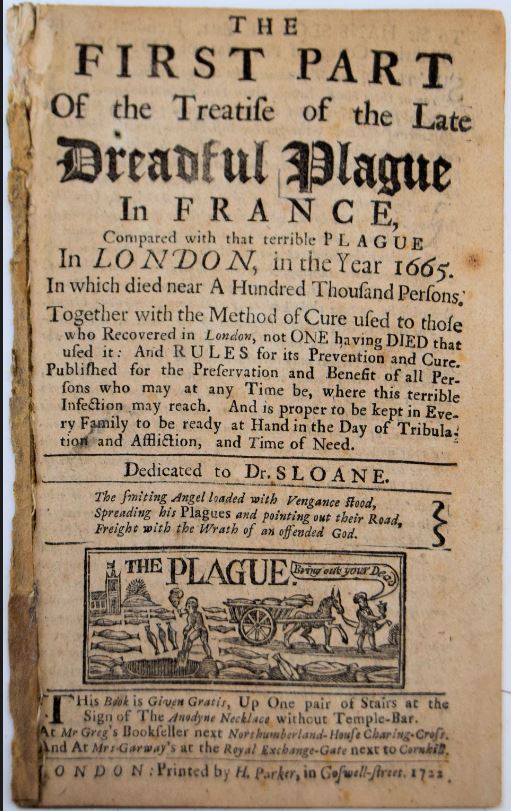 Some very old books, overdue for a very long time, were recently discovered in the back of a locked cabinet in Wimbledon. They had been missing from the London Library since the 1950s. A spokesman for the library said they never give up on retrieving lost items, though they had no expectations that these would ever be found. The books themselves were very old, dating back to the late 17th and early 18th century.

The books were held by an unnamed person who recently died. The family called in Patrick Marrin of Marrin's Bookshop who quickly identified their source. These were not merely overdue books forgotten by the borrower almost 60 years ago. Attempts had been made to remove the library's identification. However, one book was an assembly of pamphlets, including one where the London Library stamp was still in place. Marrin immediately realized something was wrong because, as he explained, the London Library never sells its material.

The taker's intentions are unclear, and perhaps will never be known. Removing identification stamps is typical for those who plan to sell stolen books, but these were never sold in all of the years since they were removed. Perhaps he wanted to have them but hoped to disguise the books' origin in case someone else saw them. Maybe he planned to sell them but got cold feet. Their being kept in a locked cabinet reinforces the obvious – that he knew his possession was illegal. Perhaps having these books became something of an albatross as years went by, something he was uncomfortable possessing, but lacking an idea of how to get rid of them.

The library made clear that it would not try to punish the family in any way. They don't even want the fines for overdue books. They are just happy to have them back.

Seven books, or pamphlets, were discovered and returned to the London Library. A librarian said some of the books are of "considerable significance." We looked at several of the titles to try to determine their rarity and value. For sources, we looked through our own Rare Book Transaction History of over 6.8 million (mostly auction) records, AbeBooks, and generally online. We also looked at the OCLC listings for thousands of libraries, but it is often hard to tell when they have an early edition, a recent reprint, or even an electronic version. Suffice to say that while there are a few old copies around, each of these is scarce even within libraries.

They are all valuable, though not overwhelmingly so. Their rarity and age imply value, but being pamphlets, and not of overwhelming significance, their value is not enormous. Mid to upper hundreds of dollars seems to be where they mostly fall. They do provide interesting looks at their times, and their rarity is sufficient that we can all be gratified that these long missing books are back at their rightful home. There aren't so many copies left that we can afford to lose any.

Here is what we found for these various titles.

A Discourse on Witchcraft, occasioned by a Bill now depending in Parliament to repeal the Statute... published in 1736. The most recent auction record we can locate for this anonymously written pamphlet, arguing for repeal of the English witchcraft law on the grounds that belief in the existence of witches results from a misreading of the Bible, comes from 1920. Anderson Galleries offered a copy, noting then the title was "scarce." We do not have a price for this sale. They say the author was Justin Winsor. No copies offered on AbeBooks but we found a Maine Bookseller offering a copy for $650.

The Most Sacred and Divine Science of Astrology, by JBBD (clergyman John Butler), published in 1680. This argument defending astrology from attacks by others did come up for sale at Swann's in 2006, where it sold for $660. Previously, it was at Anderson Galleries in 1922. A single copy on AbeBooks is listed for £327 (US $400).

The Age of the World Collected in All Its Periods by JS (John Sympson) published in 1707. No auction records found in the past century, though listed in the 1864 sale of the collection of John Allan. Not on AbeBooks. A copy was offered by Edinburgh bookseller G. P. Johnston in 1881 for 5 shillings. Described as "rare" even then.

A Collection of Letters by His Excellency General George Monk Relating to the Restoration of the Monarchy, published in 1714. One auction record since 1900, in 2015 at Christie's. Estimated $4,000-$8,000 but was unsold. However, this copy was bound with an item pertaining to a feud between Alexander Pope and Colley Ciber which was considered the more desirable item. Not on AbeBooks.

The First Part of the Treatise of the Late Dreadful Plague in France, Compared with that Terrible Plague in London in the Year 1665... by H. Parker, published in 1722 (or 1721). This one is a charming plague comparative. I have found no auction records for this pamphlet, not on AbeBooks, no other copies currently for sale (other than many recent reprints).

The True-Born English-man. A Satyr (satire), by Daniel Dafoe, a 1708 edition of a booklet first published in 1701. This one is uncommon despite it having been printed in many editions, as many as 10 the year it was first published (mostly pirated). The most recent sale took place at Dreweatts Bloomsbury on October 16, 2016. This was for a 1707 edition. It sold for £186 (US $226). AbeBooks lists one copy for sale, a 1701 edition from James Cummins for $300. The only match I could find for a 1708 edition went for a mere $1.87, but that was back at the Brinley sale in 1893. Incidentally, this is a most timely piece despite being over two centuries old. Dafoe argues for respecting immigrants in a time of xenophobia, noting that England was composed of earlier immigrants – a timely message on both sides of the Atlantic. At the time, the English King, William III, was a Dutch immigrant.

The Famous History of the Seven Champions of Christendom, by Richard Johnson, published in 1696. This one appears a bit more common than the others. Most recently, it sold at Keys Fine Art Auctioneers in 2006 for £176 (US $275). That appears to be a most reasonable price as it sold for $132 at Sotheby's back in 1972. Inflation has been substantially greater than that. Two copies are currently offered on AbeBooks, priced at $650 and $1,038.