The ABAA Fair at Oakland has now come and gone 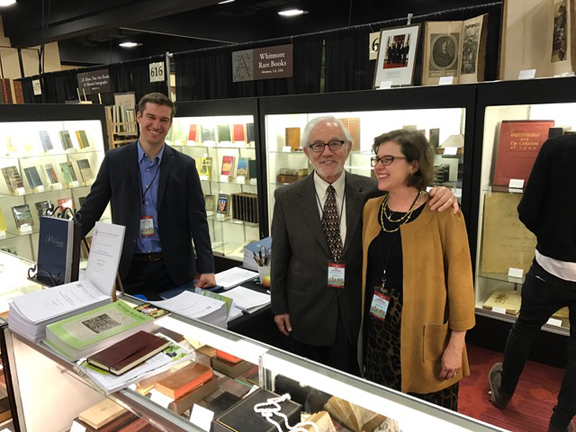 One hundred and seventy three dealers in the books, manuscript, maps and ephemera categories gathered at the recent 3 day ABAA Fair in Oakland to exhibit and offer material to collectors, institutions and other dealers.  It was a solid affair, it being the second time that the ABAA has exhibited at the Oakland Marriott.  The first was two years ago and the next, already scheduled, will be held in another two years.  Michael Hackenburg, Chairman of the ABAA in Northern California, expressed satisfaction with how the location is working out.

The fair itself is part of the larger world and that world is in flux.  Rare collectible material on paper generally falls outside of the concept of necessary.  Nevertheless, through thick and thin, such fairs prevail, in bad years survive and in good years prosper.  The Sturm und Drang of Washington this year may have been a negative factor and the aging of the collecting audience may also have played a part.  As well, many overseas dealers exhibit at the ABAA fairs in California and both BREXIT and travel restrictions may have reduced their enthusiasm.  Whatever the reasons, according to one member of the exhibition committee the show had about 10% fewer exhibitors and 5% fewer attendees.  Those who attended however were not disappointed.  The Oakland fair had very good material and the location was superb.

Dealers generally reported good sales, while among the 173 participants the specific outcomes ranged from great, to good, not-so-good and even a few disappointing.   The random chance connection of what is brought and who attends is always important.

The show also lost three exhibitors to a new California law that imposes on autograph dealers and other dealers selling autographed documents and books valued above $5.00, the requirement that they report to the buyer the name of the person or institution the dealer acquired the item from.  Mike Stillman wrote about this in the January issue of Rare Book Monthly [click here].

Timing was another problem. The New York Book Fair, this year March 9-12, is a month earlier than in the recent past thereby creating conflicts for participants who exhibit at other shows and faced either/or decisions. There were scattered reports that such conflicts reduced participation.

One observer described the Oakland Fair as more like a regional fair this year a la Seattle than the national fair this show had grown to be in the past decade.  This show is necessary, important, even vital to the field.  I and everyone else who is interested in the future of book collecting will be hoping that political braggadocio, visa restrictions and weak economy do not derail the current fragile success.  There are things bigger than books but their impact on the thinking and culture of the educated world requires that such events thrive.