California's New Autograph Law: Is It A Threat to Booksellers? 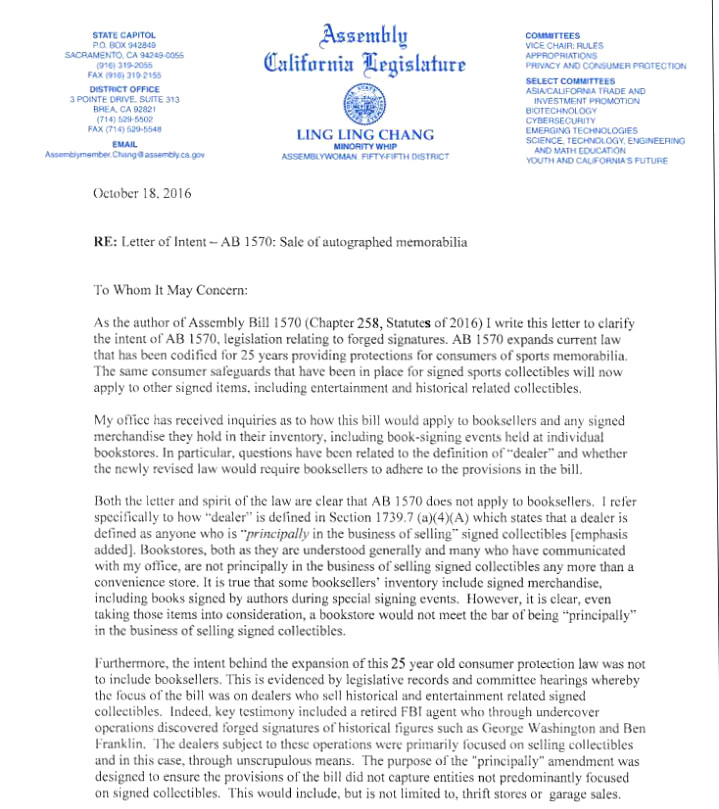 That's not what I meant! Assemblywoman Chang explains law's meaning.

A new law concerning the sale of autograph material in the state of California, which caused booksellers much consternation when it was passed in September, goes into effect on January 1. It applies not only to signed documents and memorabilia, but signed books as well. The demands it makes came across as draconian to some booksellers with signed material in their inventory. Sellers would have to supply a Certificate of Authenticity for autographs, with various detailed requirements including a description of the item, purchase price, an express warranty, size of edition if it is part of a limited edition, whether it was signed in the dealer's presence and the name of a witness to the signing, and if purchased from a third party the name and address of the person from whom it was purchased. That last requirement added the issue of privacy, as individuals who sell books to a dealer or through an auction often, maybe usually, want to maintain their privacy, rather than have their name and address given to the new purchaser. That certificate of authenticity, revealing the previous owner's name and address, could show up on eBay or Amazon at some future date.

Other provisions place requirements on dealer advertising and the type of sign that must be displayed in their shop. It also provides that the rules not only apply to in state sales by California dealers, but to sales by California dealers to out of state consumers, and from out of state dealers to California customers. If a dealer violates these requirements, the customer may recover actual damages, and an amount equal to ten times actual damages, plus court costs, attorney's fees, expert witness fees, and interest.

There is one limitation to this requirement. It only applies to items sold for $5 or more. Sell your signed copy of the Gettysburg Address for $4.99 and you're safe.

While a first reading led some to conclude the law is a death knell to small booksellers with autographed items, a deeper look indicates it may not be quite the monster they first thought. As with so many laws, the devil is in the details, or perhaps, in the interpretation. Legalese is not always as clear in its meaning as lawmakers may imagine. That is particularly true here when it comes to average booksellers because, despite the appearance of some of the language, it was not meant to impact them at all. It is targeted at businesses that run fake autograph mills, notably involving sports and celebrity collectibles. These places are evidently filled with knowingly fake autographs. The state legislature was rightfully trying to protect its citizens against such unscrupulous sellers.

We will start with why the legislation looked so frightening at first blush to booksellers. The law provides that whenever a dealer sells a "collectible" within or from the state of California, they must provide a certificate of authenticity meeting all of the described requirements, and subject to the aforementioned punishments if incorrect. A "collectible" is described as, "an autographed item sold or offered for sale in or from this state by a dealer to a consumer for five dollars ($5) or more." Previous law limited "collectibles" to sports-related items, but the new law expands it to any autographed item that a seller describes as being autographed.

So that brings us down to the question of to whom does this law apply? Who is a dealer? Here is where we need to take a close look at the exact definition. This is how the new law defines a "dealer":

Have you found the magic word, the bookseller's get-out-of-jail free card (maybe)? That word is "principally." To be a "dealer" to whom this law applies, you need to be "principally" in the business of selling "collectibles." Remember, for purposes of this law, "collectibles" doesn't mean anything collectible, like a book, but only an autographed item selling for $5 or more. Clearly, a person who specializes in selling autographed books and documents, or promotes himself as an expert on autographs, will be bound by this legislation. However, for the average bookseller, autographed copies are an occasional, incidental part of the business, not the "principal" part.

As a result of the controversy created by the bill, it's author, Assemblywoman Ling Ling Chang, released a statement explaining it was not meant to apply to booksellers. She then issued a letter, which in part reads:

"Both the letter and the spirit of the law are clear that AB 1570 does not apply to booksellers. I refer specifically to how "dealer" is defined in Section 1739.7 (a)(4)(A) which states that a dealer is defined as anyone who is "principally in the business of selling signed collectibles [emphasis added]. Bookstores, both as they are understood generally and many who communicated with my office, are not principally in the business of selling signed collectibles any more than a convenience store. It is true that some booksellers’ inventory include signed merchandise, including books signed by authors during special signing events. However, it is clear, even taking those items into consideration, a bookstore would not meet the bar of being ‘principally’ in the business of selling signed collectibles."

Assemblywoman Chang goes on to say. "Furthermore, the intent behind the expansion of this 25 year old consumer protection law was not to include booksellers." Of course, an after-the-fact letter by a legislator is not law, but it gives added force to what was the intent of using the word "principally." It reinforces what appears to me to be the correct interpretation of the law. California booksellers, and out-of-state booksellers who sell to California customers, should be able to rest easy. In the grand scheme of things, you are more akin to a 7-Eleven than to an autograph seller. Congratulations.