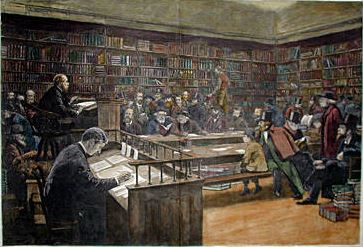 Prices at auction for lots in the book and paper field inched up 1.5% in 2016. In a year that was most notable for looking essentially like the year before, the median price rose from $266 to $270. The average price dropped an infinitesimal $19 from $2,030 in 2015 to $2,011 in 2016. That represents a decline of less than one-tenth of one percent. For reasons explained in the footnote below*, median price is a better gauge of the market than average.

Even a small increase will be welcome news to those in the trade. It's well known that book prices have been under pressure, with last year experiencing a 7% decline. That came after several years of recovery following the recession of 2008. Last year's performance brought us back to prices roughly equivalent to 2013, well above those of 2008-9, but still lower than 2007.

It should be noted that the field of collecting is changing, with greater numbers of related paper items – manuscripts, maps, prints, photographs – appearing in "book" auctions today. Likewise, many dealers have expanded their inventory to include these items. Our numbers do not break out books vs. other forms of paper so we cannot say precisely what has happened to book prices alone, but the slight decline in lots offered in the field in 2016, combined with the growing presence of other forms of paper, shows a modest decline in the number of books being sold at traditional auctions this past year.

The fourth quarter of the year has always been the busiest season at auction, but not this time. For the first time since we have been monitoring sales early in this century, the second quarter was as busy as the fourth. However, November remains the most active month for sales. Thirteen percent of all sales took place in November. At the other end of the spectrum, August is traditionally the slowest month, and that was true again in 2016, with only 4% of lots sold in that late summer month.

The highest median price was achieved at Christie's London-King Street, where the midpoint was $9,763. This was the first time in a while that no location reached a median in five figures. The top spots, as usual, were dominated by Christie's and Sotheby's, who only handle the most exclusive of material. For those on a more limited budget, numerous houses had medians under $100. In America, National Book provides a large number of budget-priced lots, in Paris there's Vermot de Pas, in Brussels Ferraton. And there is always the classic Lancaster Mennonite Historical Society auctions where you could have purchased half the lots for under $14.

This report, along with last month's account of the Top 500 prices paid at auction, completes our review of 2016. For a look at the Top 500, click here.

*We use median price, the price at which 50% of the lots sold for more, and 50% sold for less, rather than average price as the average can be skewed by a very small number of extremely high priced items. For example, if the Old South Church of Boston had sold its copy of the Bay Psalm Book, which sold for $14 million, in 2016 instead of 2013, it alone would have added $47 to the average of every book sold, resulting in an increase in the average price of $28, instead of a decrease of $19.