Archaeologists Closing in on Finding Captain Cook's Ship, the Endeavour 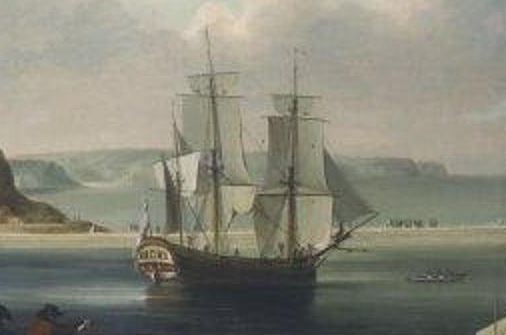 HMS Endeavour, as portrayed by English artist Thomas Luny in 1790.

Rumors spread across the wires a few weeks ago that the ship that led one of the most important explorations in history, one whose account graces all of the major collections of voyages and travels, had at long last been found. The most important of all British explorations, and of all 18th century voyages, were those performed by Captain James Cook. His three-set (usually in 9-11 volumes) account of his three voyages is a cornerstone of any major collection of voyages of discovery. The ship in question, the Endeavour, led Cook's first voyage.

The Endeavour was purchased by the British Admiralty in 1768 for a mission to the Pacific to observe the transit of Venus. Observing the transit would enable scientists to estimate the distance of the Earth from the sun. While this was the mission's stated purpose, and it was a purpose, it was only one. British officials had much more in mind. They wished to reach the imagined large southern continent, that most in those days presumed existed but no one had actually seen. However, back then, the European powers competed with each other in attempts to discover new territories, so Britain wanted to keep its ulterior motive secret. In fact, they kept it so secret not even Captain Cook was informed. He was given a sealed envelope with his further instructions, to only be opened after he reached the Pacific and observed the transit.

Cook did not find the large southern continent. That is not surprising, as none exists, at least none of the size imagined. Antarctica pales by comparison. Expectations were fueled by a belief that there must be a balancing amount of land in the southern hemisphere to that in the northern, but without a massive southern polar continent, those two hemispheres were way out of balance. Cook would realize there was no such huge continent when he sailed deeply into the area where one needed to be without sighting land, but that would not come until his second voyage. Nonetheless, the discoveries from his first voyage were of significant importance, particularly to Australia and New Zealand.

Cook circumnavigated and mapped New Zealand. Naturally, he recognized it was an island, not part of a southern continent. He then proceeded east and became the first European to sight the eastern side of Australia. Cook also was the first to encounter Australia's indigenous people. He landed in what he named "Botany Bay." Two decades later, a point nearby would become England's first settlement in Australia and site of their first prison camp. The vast majority of Australia's population to this day remains along the continent's east coast.

While Cook did not circumnavigate Australia, and realized it was continent sized, he also concluded it was not part of a large southern continent. He began to seriously doubt such a continent existed, but it would take his second voyage to reach a definitive conclusion. His instructions filled, Cook headed north, beginning the trip home. However, they struck a reef on the way, requiring a seven-week stop for repairs, and a landing later in Batavia (Jakarta) for further modifications. The Endeavour then completed the journey back to England.

Endeavour's history after that was far less eventful. It took several voyages to the Falkland Islands, first to bring provisions, later to evacuate its residents. After that, she was sold to private owners. However, soon thereafter, the British needed transport ships to carry soldiers to America to control its rebellious colonists. Rechristened the Lord Sandwich, the ship transported troops, including Hessian soldiers, to America. Ironically, like Australia itself, it was also used by the British as a prison, a prison ship for American rebels. In 1778, France's entry into the war on the American side shifted the balance of power. The French and Americans planned a joint operation to capture Newport, Rhode Island, from the British. The Americans would attack by land, the French by sea. Fearing they would soon be outmanned, the British decided to block the harbor by sinking 13 surplus ships in it. One of those was the Endeavour. She sank on August 4, 1778, and has rested on the bottom ever since.

It turns out that Endeavour has almost, though not quite, been found. The Rhode Island Marine Archeology Project believes they have isolated it to one of five wreck sites. Remote sensing has established that four of these sites contain wrecks, the fifth probably so. The mystery began to unravel when RIMAP's director discovered a document in the British National Archives in January which specified the Lord Sandwich and four other vessels were sunk in a specific area of the harbor. That led to the search that has located four, maybe five ships. It will still take more research, and visits by divers, to determine with certainty which, if any of these ships is the Endeavour. Recovery will also be a significant undertaking as salvaging whatever is left will not be easy. Still, this is a major historical find, and as exciting as it is in Rhode Island, the excitement is many times as great in Australia, which was to a large extent "discovered" by this ship.

This find follows on the heels of another historic ship discovery in September 2014. In that case, one of the two missing ships of Sir John Franklin, lost in the late 1840's off the northern continental coast of Canada, was discovered after more than a century and a half of searching. Its going missing led to a plethora of rescue, then search missions, and dozens of accounts which make up a large library all by themselves. Click here.