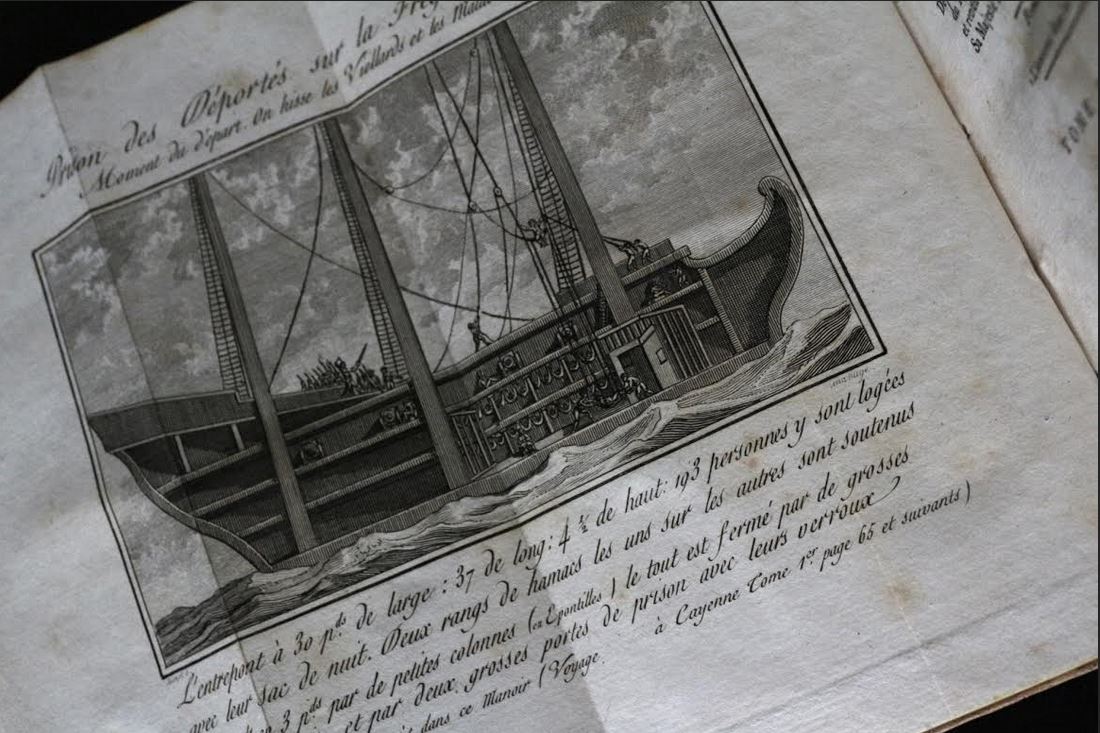 One of the most fearful periods in French history was probably the aftermath of the Revolution of 1789. Men had become political wolves, cutting each other’s throats over ideas or interests—enemy of the Republic one day, executioner the morrow, no one was safe. The Jacobins and Robespierre plunged the country into the Terror in 1793—that’s when blood had no time to dry on the restless guillotine—, and then the Directoire took over. In the middle of this new and bubbling Republic, some remained faithful to the King, and organized the resistance. When caught, they were shortened at the widow (or guillotine); others were deported to Cayenne, in French Guyana. In 1798, after a failed royalist coup, 193 of them were shipped to this cursed land. Three of them wrote their stories: Ange-Louis Pitou (Voyage à Cayenne, dans les deux Amériques et chez les Anthropophages—Paris, 1805), Jean-Jacques Aymé (Déportation et Naufrage de J.J Aymé, Ex-Législateur—Paris, 1800) and Jean-Pierre Ramel (Journal de l’Adjujant-Général RAMEL, l’un des déportés à la Guyane...—Londres, 1799). Let’s explore the triumvirate of the books of deportees.

The Bastille was taken on July 14th, 1789. Louis-Ange Pitou arrived in Paris three months later, infatuated with the revolutionary ideas of the time. He had no money, knew no one but he was young and had ambitions; as well as a good education. The story goes that he witnessed a terrible scene on his very first day in Paris: a crowd carrying the severed head of an innocent baker! Pitou was so horrified that he turned royalist. From that day on, he started to plot against the Republic, joining dozens of illegal newsletters, becoming a spy and an agitator. His pleasant manners soon earned him many acquaintances—he even met a grateful Queen Marie-Antoinette at one point. Now a National Guard, he started to attend many assemblies of Sans-Culottes (name of the revolutionaries) as an undercover agent. His brother, who was fighting with the Royalists in Vendée (West of France), needed arms. Thus, Pitou smuggled 300,000 francs worth of weapons and ammunitions during the summer of 1793! - a perilous activity, that soon cost the life of his brother. Pitou, who lived many lives in one, then became a chansonnier, or street singer; behind the church of Saint-Germain, he stood up on a table and sang songs of protest in front of a numerous and agitated audience; as a result, he became a jailbird. Everyday the water runs to the well, and after the failed royalist coup of Fructidor 18th, (September 4th, 1797*) the bottom dropped out; Pitou was sentenced to deportation to Cayenne alongside a few criminals, a handful of harmless non-juring priests and many royalist conspirators such as Jean-Pierre Ramel, Pichegru or Tronçon-Ducoutray. As a traitor and a conspirator, Louis-Ange Pitou deserved death; but he bribed a few officials, and saved his head—only to end up in hell, Cayenne (French Guyana).

Field of ambition, slaughterhouse of deportees

Since 1795, it had become fashionable to send political prisoners to Cayenne—it was a sure way to get rid of them for quite a long time, if not forever, while pretending to be magnanimous; you didn’t spill the blood of your enemies, did you? But as Tronçon-Ducoudray, who met his death in Cayenne, put it: French Guyana was nothing but a dry guillotine—and it remained active until the 1940s. “This land where we find ourselves,” writes Pitou, “has always been, since discovered, the field of ambition, the retreat of the outlaws, the graveyard of the Africans and the slaughterhouse of the Europeans banned from their country.” This is an extract from his famous Voyage à Cayenne... (1805). As the two other books aforementioned, it is considered as a travel book. The first edition came out in 1805, in two in-octavo volumes illustrated with two folding plates—the government allegedly seized a first manuscript of the relation before printing, circa 1800. Though described as “of little literary interest” by Philippe Descoux in an article about Louis-Ange Pitou published in Les Contemporains (1901), the book was successful. When reprinted in 1807, it wasn’t to be found At the author’s anymore, but At Pitou’s, Bookseller. Indeed, thanks to the benefits generated by the first edition, he had established himself as a bookseller in Paris, and started to print his old songs; but he soon went bankrupt. Nowadays, this is a sought-after book, which won’t go for less than a few hundreds of euros, though usually modestly bound—this tough economical period was poor in magnificent bindings, mainly for that type of books. Some of his digressions might be slightly boring, but there are not so many, and as soon as he comes back to his personal testimony, his book gets fascinating. Arrested in Paris, he was sent to the prison of Bicêtre: “I was thrown among the worst villains ever, who robbed me of everything, up to my shirt (...), telling me I’d better keep quiet if I didn’t want to get murdered that night. I shut up, but cried at will.” His book takes us into the belly of the beast; at one point, he’s given a shirt with a hole: “The shirt belonged to one of the poor victims murdered here two years before (the famous massacre of 1792, as he apparently mixes up his first encounters with the law and his final condemnation); the hole had been made by the sword that had been driven into his stomach!” Thrown into a cell full of lepers, he writes: “Some worms as thick as my finger fell from the living corpses above me, who were up to four on the same mattress.” Transferred to the Conciergerie, he stayed there long enough to catch a glimpse at a scary chest, “where they had stocked the hair of the victims put to death the previous day**.” And this was just the beginning!

* The revolutionists adopted a new calendar. Year 1 started on September 22nd, 1792. A worthy piece of information regarding old books, as many of the publishers of the time adopted the so-called “new style” on their title pages—hence the numerous mentions of An V de la République (Year 5 of the Republic), An III, etc.

** The executioner cut the hair of the victims so that the blade of the guillotine would meet as little resistance as possible.