A Few more Tips for Sellers from the Dealer’s Daughter 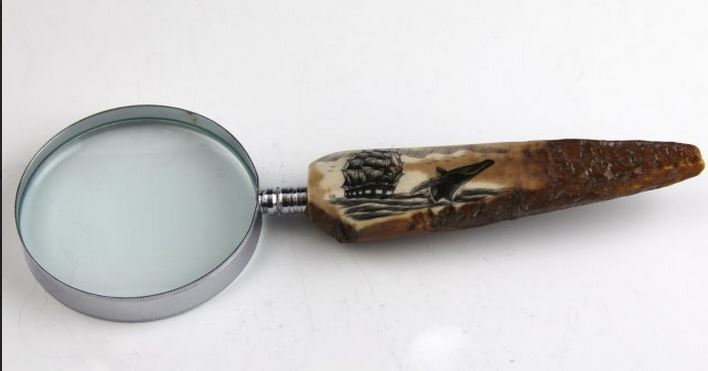 A good quality magnifying glass is one of the book world's best sales tools.

I was plowing though what I call my current inventory recently when I realized I have the taste and book wisdom of a hundred year old man, and not just any hundred year old man, but my father, Morton (Jock) Netzorg who for fifty years was a partner in Detroit’s Cellar Book Shop. My dad was born in 1912, and if alive today he’d be 103 this month.

Though he is no longer with us I realized that along with some of his books I also inherited a great many of his predilections: Who else among us has the Monk and the Dancer by Arthur Cosslett Smith on their bedside table?

Although I never did acquire a taste for Jurgen by James Branch Cabell which was my Dad’s favorite work of fiction, many of his views and ideas about buying and selling books have stayed with me for lo these many years.

Perhaps the most important thing I learned from him is people don’t just want the book or print or map or photo, they want a story that goes with it too.

So that can be a story about the author, such as Cervantes was already 57 when the first part of Don Quixote came out in 1605, and he was 67 by the time the second part was issued, illustrating that some of the best writers do their best work in their later years. Or it may be a story about the illustrator or the publisher – for example - Bennett Cerf was a founder of Random House, on the winning side of the landmark 1933 obscenity case for Joyce’s Ulysses and in 1957 was influential in publishing the first and endless subsequent editions of the “Cat In the Hat” by Dr. Seuss. This was the book which started a whole new era in the teaching of reading. Houghton Mifflin published the education edition, sold to schools, and Random House published the trade edition, sold in bookstores.

Cerf, who surprisingly is today best remembered as a humorist, is long gone from Random House, but his story and the story of this publishing house doesn’t get old. So when you’re selling a book with a Random House imprint, be it common as dirt, tell them about the company’s place in the history of American publishing and Bennett Cerf and you’ll be more likely to make the sale.

I admit I was spoiled from the start. I had someone older and smarter to guide and vet my interests. Today we have soulless mathematical algorithms, suggesting if you like A you might also like B, but I had my own in house recommender of what to read next. He was the genuine article, a flesh and blood reader who was way ahead of me in the taste department.

Said my Dad: “If you like Verve - the now very pricey French art magazine published in the 1930s, you might also like Flair - the eclectic and visually exciting American magazine edited by Fleur Cowles in the 1950s.”

How right he was.

So this is just a reminder from the old school, links are not just electronic, they are written and oral too. If you have one thing for sale, and it connects strongly to something else, don’t forget to suggest the other. Even if you’re Internet only, mentioning you have related items helps make an add-on sale or a repeat buyer.

To some of my father’s basic methods I have added a few ideas of my own picked up along the way by working in other bookstores, archives, libraries, print and map shops, and purveyors of paper of all kinds in the pre and post Internet age.

Though many of you are Internet only dealers, one useful tip relates to what in the olden days was called “retail” i.e. selling face-to-face-live-and-in-person.

Whether you are doing business from in the back row of some third rate flea market or in the grandest upscale shops or fanciest book shows, the best sales tool you’ll ever acquire is a good magnifying glass.

The better the glass (preferably one with an ivory handle scrimshawed with a spouting whale) the more you will sell.

As Mies van der Rohe famously said, “God is in the details” and nothing brings out the details better than a large high quality glass. It’s not enough to have a good glass, you must learn to actually physically put it in the hand of the customer.

Whether you are squatting on your faux Navaho blanket in the dust or laying out priceless treasures on a rubbed rosewood counter stand next to your customer (side–by- side), place the magnifier in his hand saying in your best conspiratorial tone, “Well let’s take a closer look.”

This works for books, but it works even better for maps and prints, especially older ones with fine engraving.

The magnifying glass opens up a whole new world of minute detail, the kind of tiny quirky elegance that few customers have taken the time to see before. In their hand (not yours) it focuses attention on the merchandise the way your own words will never do.

This works best if you already know what’s there to see – such as the exquisite finesse of intricate Maori carving in some of the Cook’s Voyages plates or the tiny but important credit line that might otherwise be missed without it.

Those photogravures from the Harriman Expedition to Alaska say “Curtis” underneath the image - as in Edward Sheriff Curtis who went on to become a celebrated photographer of Native Americans. The Harriman Expedition was his first big assignment and the place where he met some of the most famous scientists and naturalists of his day as well as many very rich captains of industry that would help to finance and publish his later photographic efforts.

Back in the 1980s I did some teaching at Lahaina Printsellers, which in those days was probably the only fine antiquarian map dealer located in a tourist mall side by side with establishments selling chocolate covered macadamia nuts and Aloha attire.

Printsellers was done up to look like a 19th century English gentleman’s library right down to the brass headed nails in the leather upholstered club chairs and tasteful green and gold color scheme. People who would never have entered a gallery or map shop on the Mainland trooped through the doors. It was enchanting while it lasted.

There I was in the back room plowing though a pile of images from Picturesque America (which we had by the yard, in multiples of dozens), when, with the help of my trusty magnifying glass I noticed for the first time that one of the Western scenes had a Thomas Moran credit line.

Now this was a little black and white print no more than 8x10” and shall we say at that scale it lacked curb appeal. However, Thomas Moran was a famous American painter best known for his gigantic landscapes of the American West, which to this day bring astronomical prices at auction.

Though these prints had lingered in our inventory for years and seldom sold, the minute the sales staff (composed of surfers, housewives, substitute teachers and former jewelry vendors from Las Vegas) learned from me in tones of reverent awe, that this particular print was by Moran and could tell about this painter and his work themselves, the images literally flew out the door. After all, after we told the story and they held the glass in their own hand, who could resist the opportunity to own an authentic Moran at a price an average person could afford?

One more tip about the magnifying glass, if you’re selling in the open stall or show, tie it to the table. A magnifying glass has an almost magical attraction to little boys about the age of seven who will either steal it, implore their father to buy it, or use it to set a fire and burn down your stand.

For an earlier installment about the dealer’s life in the pre-internet age and some time tested tips to sellers and would-be sellers of books and antiquarian paper see the April 2011 issue (click here) Please note that the email address given in that article has changed. The present address is wailukusue@gmail.com.