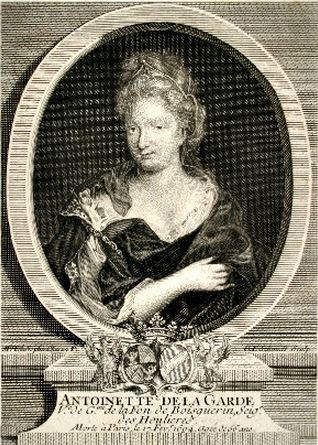 Women, states a critic, carry their natural loquacity, their abundant, restless and unquenchable verbosity in everything they arrogantly undertake to say, and when infatuated with the bel-esprit, they will write huge volumes about nothing, or about serious topics, which, under a pile of words, are reduced to nothing. In a word, learnt women is something Nature had never planned. Such was Abbé Feller expressing himself in his Historical Dictionary (Liège, 1790). Mr Feller was an idiot, a reactionary, a Voltaire-hater; and, as stated before, to be stigmatized by such a man was probably a good omen. Nevertheless, many shared his view, and being a learnt, beautiful and—worst of all—intelligent woman like Mme Deshoulières during the 17th century was probably quite a delicate position. As a matter of fact, her life was no pastoral poem.

Born Antoinette de la Garde in 1633—or 1634—in a family close to the Crown, Mme Deshoulières was a beautiful woman. The portrait that usually illustrates her works might be disappointing at first; but let’s bear in mind that she was around sixty when it was drawn—and that she was living in the 17th century! Let’s trust the good taste of her many suitors, including the Great Condé. The preface of the Prault’s edition of her works (Paris, 1747), reads: “Nature had assembled in Damsel de la Garde spiritual and physical ornaments to an unusual extent. She was uncommonly beautiful; she was tall above average, had a natural elegance as well as noble and caring manners; she was sometimes filled with joy, and sometimes subject to a sweet melancholy not opposed to pleasure. She could dance, ride, and did nothing but with grace.” Such a female creature, planned by Nature for sure, could have become a successful courtesan; but Antoinette wasn’t only beautiful, she was also intelligent, and talented; she avoided the trap of beauty. “Beauty is not forever,” she wrote to a female friend of hers who was getting old, “and we are paving a sad future when we count on it only, / We don’t know what to become, when we’ve been nothing but beautiful.” She even portrayed beauty as a peril to one of her daughters, reminding her that once the bud has blossomed, of the rose only the thorns remain. Antoinette Deshoulières apparently tried to live a truthful life; she even disliked make-up: “Far from attracting men, / It only awakes their disgust.” Of course, such a disposition didn’t fit Court life. And she, who hated make-up in customs even more than on faces, soon realized that her talent was a sort of curse. She had learnt Latin, Spanish and Italian from a very young age, had read many books, and had become what was then known as a femme savante (learnt woman). To a friend of hers who had decided to follow the same path, she sent a warning: “How shall you escape the grievances that the bel-esprit at Court suffers? / The air you’ll breath there is deadly to those who undertake to write.” At the end of the day, her blessing became a source of suffering: “You, whom the heavens haven’t blessed with this talent of mine, which I hate, / Believe me, don’t you acquire it.”

Poetry is not the most thriving market as a far as antiquarian books are concerned. Of course, first editions with prestigious provenances are sought-after—but common poetry books sell for derisory sums—especially on eBay. Furthermore, Mme Deshoulières is somewhat out of fashion. An 18th century edition of her works in a very good condition will hardly reach 150 euros. Right now, a seller is offering an 1802 edition of her selected poems (bound in half leather) for... 5 euros. Just the other day, I found a scarce morocco-bound copy of the Prault’s edition of 1747. It features two volumes, with a frontispiece and two engraved title pages; a very nice book from the printery of J.B. Coignard, printer of the King. The small fonts are neatly printed, the overall composition quite perfect—a delight to read, and the nicest edition I’ve seen so far. It also contains the very good poems of her daughter, Antoine-Thérèse. I bought it from a famous Parisian bookseller, and got it for what I consider to be a good price. Such are some beauties of our culture, ignored. Mme Deshoulières enjoyed some popularity at the time, yet; but some social faux pas cost her a lot. First, her husband was a traitor to the Crown; he followed the Prince of Condé when the latter rebelled against his King to join the Spanish army. Antoinette followed him to Rocroi and Brussels—where her talent and wit started to blossom—, but the French seized the goods of her husband when he deserted, and they had nothing left but what the Spaniards had promised them; when she showed herself too insistent in asking her due, she was arrested, and then sent to the castle of Vilvorden, where the Spaniards “meditated nothing less than putting her to death,” according to the preface of the Prault’s edition. Realizing that his new friends had become his worst enemies, Lord Deshoulières deserted, freed his wife from Vilvorden—he pretended to act on orders of Condé—, and then galloped to France where he had arranged his return with Cardinal Mazarin. Mme Deshoulières arriving to the Court of France created a lot of waves, and several poets wrote her portrait in verse, including Gramont and Lignières. But the affairs of her husband were in a terrible state, and even the odes she dedicated to Louis XIV to prove her loyalty couldn’t help her. She “sent incense to deaf divinities”, wrote Chaudon (Dictionary). The Sun King didn’t forgive easily, and when Mme Deshoulières passed away in 1694, she left little to her children.