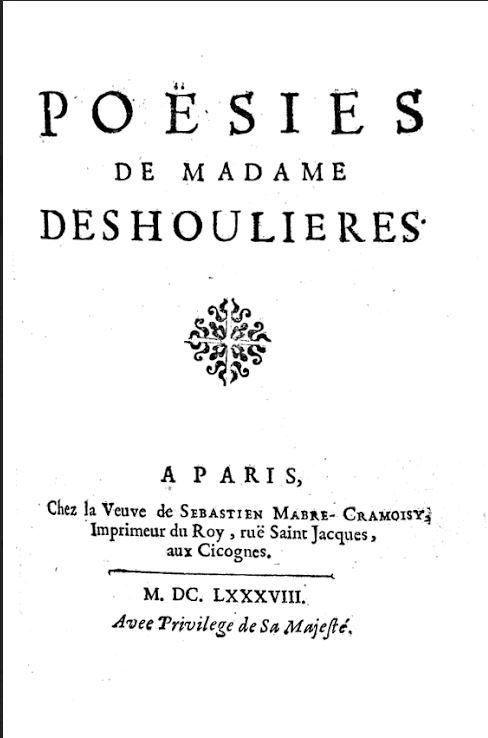 By 1674, she had settled in Paris where she became close to Pelisson, Perrault, Ménage, Corneille and La Monnoie. Her first poems were printed in the Mercure Galant in 1672, and she had become quite a respected figure when she did a next faux pas, siding Pradon and Boileau in their rivalry with Racine—her sonnet written against Racine’s play launched the famous “Phèdre’s quarrel” that gave birth to several pamphlets and ended up in Boileau’s beating. In Le Siècle de Louis XIV, Voltaire drew a short and despising portrait of Deshoulières: “It’s a pity she wrote this bad sonnet against the admirable Phèdre by Racine. (...) Isn’t it enough for women to be jealous in the field of love? Do they have to be the same with belles lettres? A satirical woman resembles Medusa or Scylla, two beauties turned monsters.” Voltaire was usually less partial. Deshoulières’ sonnet goes like: “In a golden seat, Phèdre, trembling and pale / Recites some verses, where at first, no one understands anything.” Pradon’s own version of Phèdre, which had come out at the same time—hence the rivalry—, was eventually overshadowed by Racine’s, whose triumph pushed his detractors to the background.

Several serious publishers put out Deshoulières’ complete works in the first part of the 18th century, including Prault, but as her plays, dialogues and other less consequent writings about Grisette (her dog), grew out of fashion, she became confined to the “selected works” editions. Chaudon stated: “Thus, we could reduce Mme Deshoulières’ works to a 50-page booklet; provided that we are not too demanding, that is.”

Even Crapart, who put out a selection of her poems in 1803, agreed: “The reputation of most poets would improve should we focus on a handful of their poems; it is the case of Mme Deshoulières. An ingenious badinage, a gorgeous poetry, simple and harmonious, seem to characterise her literary genius.” An ingenious badinage? How did such a talented writer, who entered two literary academies—but not the French Academy that didn’t tolerate unnatural creatures such as learnt women at the time— become a mere extra? Well, a literary plot partly tarnished her reputation—and it’s probably linked to the Phèdre’s quarrel. “It’s a pity this author isn’t safe from plagiarism,” reads Chaudon’s Dictionary. “Her Idyll of the Sheep, for instance, one of her nicest works, is almost copied word for word from an ancient poem.” In this particular work, she hid her dark inner feelings behind a falsely light badinage, indirectly addressing her children: “My dear sheep / I did, to make your lives sweeter, everything you could expect from a tender friendship / But the long anger of Fortune destroys and poisons all my efforts / And abandons you to the fury of wolves. (...) In vain do I implore the Heavens / They laugh at my despair, and remain deaf to my cry, (...)/ May you, happy and without my help, live the happiest days, my innocent sheep, my beloved sheep.” Could these verses, that sound so much like Mme Deshoulières, be from another poet? Plagiarism seems so far from her personality. In 1819, the Encyclopédie Poétique evoked a collection of poems entitled Promenades de Messire Antoine Coutel (or Wanderings of Mr Coutel): “Mme Deshoulières obviously wandered around this book; indeed, her Idylle des Moutons is taken almost verbatim from on of Coutel’s poems. (...) Some tried to justify Mme Deshoulières by accusing the author of the Promenades... of being the plagiarist himself. But they forgot that Coutel’s poems came out several years before Mme Deshoulières’.” But how come Voltaire, a well-informed man who didn’t appreciate her, never mentioned this story? Didn’t he believe it? Or did he fear to cast a shadow over Racine’s memory? Indeed, in 1839, the Bulletin du Bibliophile of the famous Nodier (N°11 / 3e Serie), cleared it out: “The title page of (Promenades de Messire Coutel), carries the date of 1676; but it is printed on a weaker paper than the rest of the book, and seems to have been substituted to the original title page; (...) It is said that Racine, seeking revenge for the unhappy epigram of Mme Deshoulières, had this title page printed with the date 1676 so he could accuse his enemy of plagiarism. (...) This story seems quite unlikely, and not worthy of the great Racine. (...) This idyll had surely become popular long before it was printed; it had probably been read in several salons; and Coutel decided to steal it at one point. As a matter of fact, this idyll is quite degraded in the Promenades... The memory of the plagiarist probably failed him (...). Furthermore, he was no stranger to plagiarism; those who will care about reading his book shall judge by themselves. At the top of page 7, they’ll recognize four charming verses by Bertaud. (...) The thief is not Mme Deshoulières, then.”

A SAD AND BIZARRE CHOICE

Mme Deshoulières was a genuine writer, who even confessed being too proud a woman. When Father Bouhours put out a book about the most spiritual writers of the time, she couldn’t hide her feelings: “In the triumphing list of famous authors, we find in your book/ I couldn’t find my name/ About me (did you?), you didn’t think / But you have also left aside Pascal who was yet not too bad a thinker / Such a companion is my consolation.” Her “proud soul” never prevented her from being true to herself; and this made a deeply melancholic poet out of her. The seriousness of life is reflected in even her lightest verses. Talking about love, she ended up cornering mankind: “This proud reason of ours we praise so much, against passions is no remedy / (...) A cup of wine unbalances it, a child seduces it / And to tear apart the heart that calls upon it is all it can do / Always powerless and strict, it opposes everything, and never overcomes anything.” But her clear-sightedness and her honesty is never as obvious as in her poems born out of pain and despair. In 1682, she was diagnosed with breast cancer; as soon as 1686, the pain had become almost unbearable. “Lord, never do we know You in the middle of pleasures / In this abyss where your fear and grace drown / In vain does Your voice cry and warn / Our hearts, deaf to Your voice, hear nothing but our wishes.” But she never turned a devout—she hated them. She never ran away from her thoughts, and questioned life until the end: “My Lord, I’ve never really known You, (...) / To love You seems quite a sad and bizarre choice to make as long as we can dedicate ourselves to pleasure / We consider that we owe You our last days only / And only with regrets do we, in these fateful moments, give You the horrible remains of a life used to offend You always.” The dignity with which she describes her pain is astonishing: “Lord, do not forsake me / Please remember I am Your creature / And that to save me from the abyss, You suffered the most shameful death / When You put me to the most burning pains, support me in these moments as my strength fails me / Make sure that, suffering in Your name, my pains turn to sweet / Ever since, under the languishing burden of pain, trampled, I’ve been waiting for nothing but the deadly strike, four times the sun has left us.” Though Mme Deshoulières could see beyond things, she never denied or rejected her fragile human condition: “How blind are human beings! / (...) Hundred and hundred of abysses open under our feet to make us perish / Yet, among vices, we die, without thinking that we must die.” Antoinette Deshoulières died in 1694, after more than ten years of pain. Her daughter Antoinette-Thérèse, known as Mademoiselle Deshoulières, became a very good poet too—unfortunately, she was also diagnosed with breast cancer, and died in 1718. She was buried alongside her mother, in the church Saint-Roch, in Paris.

Madame Deshoulières is quite unknown nowadays, and there’s no proper reprint of her works available. In 2001, a French singer named Jean-Louis Murat found an 18th edition of her poems at the flea market, and recorded a full album of her poems. Her proud soul would probably deplore this lack of attention, but she knew that talent and intelligence were no promises in her world—just a blessing that sometimes resembled a curse. That’s the way (human) nature had planned it...