Seward's Folly? – What Happens When a Small Institution Realizes an Old Gift is Extraordinarily Valuable? 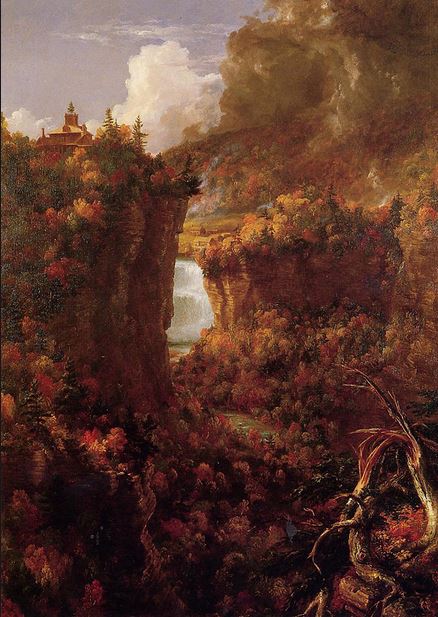 Thomas Cole's painting of Portage Falls on the Genesee.

Bequests may be thought to last forever, but as we know, nothing lasts forever. Books and other valuables left to libraries, museums, universities, and other institutions, so welcome at the time, may become burdensome years into the future. Some may no longer seem as interesting. Others may become costly to maintain. Institutions don't always last forever either and their ability to maintain collections fades as their visitors decline. On the other side, items they possess may grow in value beyond anyone's wildest dreams, making the temptation to cash out irresistible. A copy of the first book printed in America, the Bay Psalm Book, will be auctioned this fall for an estimated $15-$25 million. The Boston church that owns it sees better uses for such value than holding a small book in a safe forever. This is a story about a similar item, a painting bequested to a small institution sixty years ago. Today, it is estimated to be worth around $20 million.

In 1823, 22-year-old lawyer William H. Seward, recently admitted to the bar, moved to Auburn, New York. He married, went into law partnership with his father-in-law, and moved into his father-in-law's house. This would be his home the remainder of his life. Seward was a supporter of progressive causes, including education of immigrant children, prison reform (Auburn is home to a state prison), and most notably abolition. His home became a stop on the Underground Railroad. Auburn was a fast growing community at the time, its location near the Erie canal making it a good location for manufacturing. Seward became friendly with political powerhouse Thurlow Weed, which led to his being elected to the state legislature and, in 1838, Governor of New York. The following year, his friends commissioned a painting in his honor. What Seward was given was a large painting called Portage Falls on the Genesee. The artist was Thomas Cole, today generally recognized as the founder of the Hudson River School of painting. It hung in Seward's house the remainder of his life.

Seward would go on to have one of the most storied political careers of the 19th century. By the 1850's, he was serving in the U.S. Senate, a leading abolitionist. He joined the new Republican party and by 1860 was their leading name. He was favored to receive their presidential nomination in 1860. However, his radical views made some party members concerned about his electability, and meanwhile, an obscure losing senate candidate from Illinois was garnering a lot of attention with his speeches. The Republicans decided to go with this perhaps safer nominee in 1860. They nominated Abraham Lincoln instead.

The disappointment did not stop Seward from loyally serving Lincoln as Secretary of State. The assassination plot that took Lincoln's life also targeted Seward. He was stabbed several times the same day Lincoln was assassinated, but survived his wounds. He continued his service under President Andrew Johnson, defending him when he was impeached and almost removed from office. It was during this term that Seward made his greatest deal, one not much appreciated at the time – “Seward's Folly.” For the seemingly excessive sum of $7.2 million dollars, he purchased Alaska from Russia. He did not realize there was an ocean of oil beneath its surface, but he nonetheless recognized that this would one day be appreciated as his greatest achievement. He was right.

With the end of Johnson's term, Seward returned to his Auburn home. He died there is 1872. He bequeathed his home and its possessions to his son, Civil War Brigidier General William H. Seward, Jr. When the latter died in 1920, he passed the homestead on to his son, William H. Seward III.

Family inhabitance of the homestead finally came to an end with the passing of William III in 1951. He left it and most of the possessions within as a memorial to his father and grandfather. It was placed under the care and ownership of The Fred L. Emerson Foundation. Fred Emerson was a successful shoe manufacturer from Auburn who set up a charitable foundation in that community in 1932. William III undoubtedly concluded this charitable foundation would be a logical owner for the home which was to be preserved as a museum. The Emerson Foundation owned and managed the home from 1951 until 2008.

In 2008, it was decided best if the Seward homestead officially become a museum under New York State law. The Seward House Museum was established and all of the Sewards' assets were turned over to it, all, that is, except the Cole painting. The Emerson Foundation retained ownership of the painting. It was becoming apparent that this item was of a value far exceeding other assets Secretary Seward once possessed. However, the foundation loaned it to the Seward Museum so it could remain on the wall. The local court, in approving the transfer of property from the foundation to the museum, specified that the foundation could not transfer the painting to anyone other than the museum without court approval.

In February of this year, the Emerson Foundation, with the approval of the Seward Museum, removed the painting from the house. They became fearful of such a valuable item hanging on the wall of a small house-museum. Thoughts such as theft, fire, and burst pipes ran through the officers' minds as they thought of this painting, now appraised at $20 million, hanging on the wall. They took it to an unknown though presumably safe location. They thought of securing it in some sort of vault in the house, but this didn't really make much sense. The Seward House just didn't seem a logical place for such a valuable painting. Ultimately, they decided the reasonable thing to do would be to sell the painting, with half of the proceeds to go to the museum and the other half to the foundation.