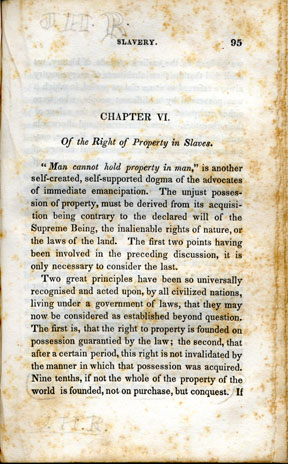 SLAVERY IN THE UNITED STATES
By J. K. Paulding
Published in New York in 1836
CHAPTER VI.
Of the Right of Property in Slaves.
2,958 words
"Man cannot hold property in man," is another self-created, self-supported dogma of the advocates of immediate emancipation. The unjust possession of property, must be derived from its acquisition being contrary to the declared will of the Supreme Being, the inalienable rights of nature, of the laws of the land. The first two points having been involved in the preceding discussion, it is only necessary to consider the last.

Two great principles have been so universally recognized and acted upon, by all civilized nations, living under a government of laws, that they may now be considered as established beyond question. The first is, that the right to property is founded on possession guarantied by the law; the second, that after a certain period, this right is not invalidated by the manner in which that possession was acquired. Nine tenths, if not the whole of the property of the world is founded, not on purchase, but conquest. If we go back to the earliest periods of history, we shall find that the then inhabitants of every country always referred to some distant period, in which it was possessed by a different people, who were either extirpated or driven away by the valour of their ancestors. Among barbarians, and afterwards when the feudal system prevailed in Europe, conquest was equivalent to an almost total change of property. The nobles, then the sole possessors of the land, were despoiled, and the conqueror became the possessor. Three times at least, has a great portion of the property of England changed hands by conquest; and at this moment it is held by the tenure of rapine alone. The holders can only go back to the time of William the Norman for a title to their possessions. It is needless to multiply examples of what is in fact the history of all nations, except our own, which has never yet been, and we trust in God never will be, conquered. Our history will only be referred to for the purpose of illustrating the position above assumed. The United States were once the property of the Indian tribes, and though a considerable portion was fairly purchased, by far the largest was obtained by conquest alone.

However defective such a title may be originally, it acquires force and authority by the lapse of time, and the absolute necessity of putting some limit to the period in which a peaceable possession of property implies an unimpeachable right. If, from a feeling of compunction, some nice scruple of conscience, or in accordance with some new standard of moral and religious obligation established by fanatical expounders, it should be determined by the present possessors of the lands parceled out by William the Conqueror, to restore them to the descendants of the ancient Saxons— or, to go still farther, the ancient. Romans; or, still beyond, to the ancient Britons, who once possessed the country—where shall they find the real heirs, and how will these establish a direct descent from the rightful proprietors? Or should the good people of the United States be smitten with a compunctious feeling, and desire to give back to the Indian tribes, who once roamed and hunted over them, those territories now smiling in cultivation, where will they find their descendants? And if they did, what would those savages do with these cultivated fields, now stripped of their interminable forests, and of the game which once abounded in them? They would perish under this act of sublime retribution; and the present occupants would voluntarily incur exile and poverty, without the consolation of being rewarded for their sacrifices, by the refreshing spectacle of savage happiness.

Whatever, therefore, may be the original foundation of a right, there arises, from the very nature of things, a necessity, that after a certain period of quiet possession, under a special or general law of the land, it should be forever after unassailable, on any defect of title. The period is not uniform in all civilized nations; but wherever a written system of laws exists, some statute of limitation cuts off the source of eternal and vexatious claims, which might otherwise be brought forward, when time, and its various accidents, will naturally have rendered it difficult if not impossible to rebut them. Such a law is necessary to the security and value of property, and such a law is in force in every state of this Union. Under this law the right to property, of which possession has been had the requisite number of years, is secured ever after. The real foundation of the right, of property is therefore the law of the land, and not any abstract principle of religion or morality.

And this law of the land, being based on the principle that it supersedes the law of force, and guaranties the peaceable possession of property after the expiration of a certain time, is consonant so far as human laws can be, to the laws of the Supreme Being. It may occasionally present instances of injustice, and sanction graybeard frauds; yet still it is founded on a salutary general principle, which, beyond doubt, practically conduces to the happiness of mankind, and is therefore sustained by the extent of its benefits compared with the evils it may produce. This is all that can be expected from human laws; and were more to be required; it could not be obtained until perfection becomes an attribute of the works of man. By placing the sanction of right on the ground of possession, the law does not intend to justify any person in retaining a property acquired by fraud, and which the inheritor knows was thus acquired. The moral obligation remains the same; but after the expiration of the prescribed period, the fraudulent possessor must be left to his own conscience and the justice of Heaven.