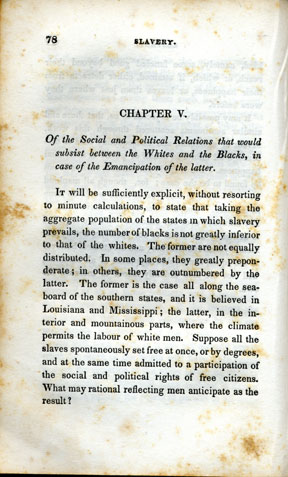 SLAVERY IN THE UNITED STATES
By J. K. Paulding
Published in New York in 1836
CHAPTER V.
Of the Social and Political Relations that would subsist between
the Whites and the Blacks, in case of the Emancipation of the latter.
3,447 words
IT will be sufficiently explicit, without resorting to minute calculations, to state that taking the aggregate population of the states in which slavery prevails, the number of blacks is not greatly inferior to that of the whites. The former are not equally distributed. In some places, they greatly preponderate; in others, they are outnumbered by the latter. The former is the case all along the seaboard of the southern states, and it is believed in Louisiana and Mississippi; the latter, in the interior and mountainous parts, where the climate permits the labour of white men. Suppose all the slaves spontaneously set free at once, or by degrees, and at the same time admitted to a participation of the social and political rights of free citizens. What may rational reflecting men anticipate as the result?

Separated as are the two races by impassable barriers; carrying in their very faces the badge of that separation, and animated as they must necessarily be by conflicting interests, there can be no doubt that the first struggle would be for ascendency in political power, and that it would be one of far greater excitement than the ordinary contests of parties in the United States. The master with all his ancient prejudices, if you please, all his accustomed ideas and habits of superiority, would be obliged to enter into a struggle for power with his quondam slave; the latter, flushed with all the insolence of newly acquired freedom, and glowing not only with the recollections of the past, but the hopes of the future. Would such a contest be a peaceable one? Would it approximate to our ordinary elections, in which the struggle is between two parties recognising in each other equals and associates, while here it will be whether the master shall be governed by his former slave? Impossible. Elections would become battles; and blood, not ballots, would decide the mastery. The body politic would be rent asunder by eternal and inveterate struggles; civil strife would ensue, and a deadly war of extermination be the end of this woeful experiment of philanthropy, where the numbers of the two races were any way equal. Where the blacks outnumbered the whites, the latter would pass under the yoke of the negro, and become the victims of a legislation of ignorant slaves, unacquainted with every principle of civil liberty or the rights of property, and prepared by the doctrines of the abolitionists to believe that it would be in accordance with the law of God and the rights of nature to claim an equal share of the wealth of the United States. The white race would either become victims or exiles, for it is impossible to conceive they could live under a government so constituted.

Let us now inquire what would be the social relations between the white and the black races, in the event of universal emancipation. No one acquainted with the circumstances under which this must take place, can for a single instant believe the latter would be admitted to an equality of social intercourse with the families of their former masters, though they might among themselves enjoy all these privileges, and ape them in their modes of living, so far as their means might permit. This, however, would not satisfy them, for it is one of the invariable characteristics of human nature to aspire to an association with those we have always been accustomed to consider our superiors. This universal foible belongs to all classes and colours, yet is strongest in the two extremes of life, which here, as in everything else, approach each other. No class of mankind, with the exception of our negroes, aspires with such vehement loyalty to an intimacy, or even a mere speaking acquaintance with those above them as the aristocracy of Europe. To be admitted to the social circle of the king is an honour for which they will sacrifice both personal dignity and independence. They will, therefore, easily comprehend the anxiety of the slave to be admitted to the social fireside of his master, and with what bitter feelings of mortification he will meet a repulse, now when he has been ennobled, as it were, by emancipation.

The blacks, though enjoying equal political rights, would be for ever excluded from all social equality, and that in a much greater degree than the distinction of ranks now occasions in Europe. This, without doubt, would prove a fruitful source of gnawing irritation and jealous malignity, far more venomous than the feeling with which the starving Irish pauper contemplates the splendid nobleman rioting in luxury, because the pauper sighs only for bread, not equality; whereas the emancipated negro receives at the same time the boon of equal rights and an equal voice in the state. Yet we see the fruits of such a feeling in the dark chronicles of desperate insurrections, midnight violence, and murders, on one hand; military law, drumhead court-martials, and pitiless executions on the other. Even Mr. O'Connell, it would seem, might find in the situation of his own native land sufficient to monopolize all his sympathies, and refrain, as well from condescending to the profound humility of accepting the charity of a people who, according to his own account, are themselves objects of charity, as from the deep ingratitude of denouncing a country which is now, and long has been, the sole refuge of his countrymen from starvation.

From every consideration of the subject, it will appear to the last degree improbable, if not absolutely impossible, that an equal, or nearly equal number of whites and free blacks, enjoying the same political rights, could live in peace and harmony together. They could never be equal in other respects; and nothing but the complete subjugation of one could prevent eternal strife. They would form distinct irreconcilable factions, inflexible in their opposition, and the state be convulsed with endless conflicts. Without property, yet with equal rights and superior numbers, the blacks would wrest from their ancient masters the power of the state, and beyond doubt exercise it for the purpose of oppressing them. Without any rational ideas of government, they would aspire to govern. Without those habits and that experience, which are always indispensable to self-government, they would endeavour to modify the state to suit their own wayward purposes; and without any other religion than fanaticism, the piety of ignorance, they would become the dictators of the public faith. Their ascendency would be a despotism over white men, and the fabric of civilization and liberty, which consumed ages in its construction, would be demolished in a few years by the relentless fury of ignorant barbarians. A new Africa would spring up in the place of free and enlightened states, and the race of the white men be either forced to abandon their homes, or to level themselves with the degradation around. Is this a consummation for philanthropy, religion, or philosophy to triumph at, or for rational, enlightened men to contemplate with glowing anticipations? Does an assertion of the law of God and the rights of nature lead to such consequences and are these the ordinary fruits of good actions? It is blasphemy to maintain such fatal dogmas. They are the box of Pandona; the gift of false gods, stuffed with malignant evils, which to open is the signal for misery to mankind.