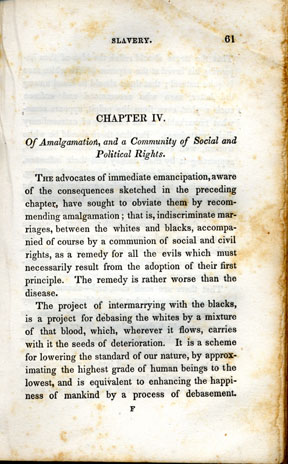 SLAVERY IN THE UNITED STATES
By J. K. Paulding
Published in New York in 1836

CHAPTER IV.
Of Amalgamation, and a Community of Social and Political Rights.
3,557 Words
THE advocates of immediate emancipation, aware of the consequences sketched in the preceding chapter, have sought to obviate them by recommending amalgamation; that is, indiscriminate marriages, between the whites and blacks, accompanied of course by a communion of social and civil rights, as a remedy for all the evils which must necessarily result from the adoption of their first principle. The remedy is rather worse than the disease.

The project of intermarrying with the blacks, is a project for debasing the whites by a mixture of that blood, which, wherever it flows, carries with it the seeds of deterioration. It is a scheme for lowering the standard of our nature, by approximating the highest grade of human beings to the lowest, and is equivalent to enhancing the happiness of mankind by a process of debasement.

That the negro should relish the idea of thus improving his breed at the expense of the white race is quite natural; that there should be found among the latter, men who recommend and enforce such a plan, even from the pulpit, appears somewhat remarkable, as an example of extraordinary disinterestedness. But that there should be white women, well educated and respectable females, supporting it by their money and their influence, their presence and co-operation; apparently willing, nay, anxious to barter their superiority for the badges of degradation; to become the mothers of mulattoes; voluntarily to entail upon their posterity a curse that seems coeval with the first existence of the negro, and cast away a portion of the divinity within them at the shrine of a mere abstract dogma, is one of the wonders which fanaticism alone can achieve.

That there are such men, and—shame on the sex—such women, is but too evident. But they are exceptions to the rest of their class, to the race to which they belong. They are traitors to the white skin, influenced by mad-brained fanaticism, or the victims of licentious and ungovernable passions, perverted into an unnatural taste by their own indulgence. The proposition has been everywhere received with indignant scorn.

Throughout the whole United States, with the single exception of little knots of raving fanatics in a few towns and villages, one chorus of disgust and abhorrence has met the odious project. In a country hitherto the most exemplary of any in the world for obedience to the laws, assemblages, not of idle and ignorant profligates, but of respectable citizens, have, in the absence of all statutes for repressing such outrageous attacks on the feelings of society and the established decorum of life, taken the law into their own hands, and dispersed or punished these aggressions. Nay, even the peaceable and orderly people of New-England, celebrated for their cool self-possession, their habitual devotion to the peace and harmony of society, have everywhere risen against the monstrous indignity, and infringed upon the laws of the land, in vindication of the purity of their blood. The universal sentiment, of our race stands arrayed against the disgraceful alliance; and whether it be natural instinct, inspired reason, or long established prejudice, there exist no indications among us, to induce a belief that it will ever be eradicated from the hearts of the white people of the United States.

But, admitting it could, it is denied that such a consummation would be desirable, not only for the reasons just presented, but on the ground of other deep considerations. Such a mixture would at once destroy the homogeneous character of the people of the United States, on which is founded our union, and from which results nearly all those ties which constitute the cement of social life. A mongrel race would arise, of all shades and colours, each claiming under the new order of things equal social and civil rights, yet all enjoying real substantial consideration in proportion to the whiteness of their skin, and the absence of those indelible characteristics which mark the African race. It could never become the climax of dignity to wear the black skin. The law of the land might declare it equal to the white, and confer on it equal social and political rights; but the law of nature, or what is equivalent to it in this inquiry, the long habits, and feelings, and thinking, and acting, which have descended from generation to generation, and become a part of our being, would declare against it with a force that nothing could resist. Instead of two factions, we should have a dozen, arrayed against each other on every occasion, animated, not like the parties subsisting among us at present, by certain known principles of action, which may be said to ennoble such contests, but by petty malignant jealousies, arising from different shades of colour, different conformations of the nose or the shin, each carrying with it a claim to more or less consideration. Does not every true-hearted American shrink and scoff, at sharing, or rather surrendering his rights to factions animated by such considerations, instead of his own lofty preferences or dislikes, founded on the love of liberty and the fear of despotism? Let it also be borne in mind that all these varieties of shades and colours would, by a natural instinct, unite against the whites as the highest grade, and thus, by outvoting, strip them of their dominion, and place them at the foot of the ladder of degradation.