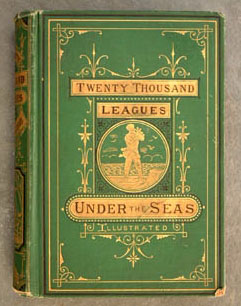 
I used two sites for this: www.amazon.com and Abebooks

. ABE gave me a very good picture of the existing market for a title, while Amazon had the discounted new book price and their own listings of used books. I soon learned how a book that will never sell on ABE because too many of the same title are listed may have a good shot on Amazon as either a rare book (priced above Amazon’s list price) or a used book (priced either above or below Amazon’s list price). I also discovered that ABE is extremely useful for finding out more about a particular rare book, which can be done by reading competitive listings.

After my initial in-house effort to create inventory, I started to look around to see where other books could be acquired, and went to the usual places — estate sales, library sales and auctions. At one of our first sales we came late, and were relegated to picking over the leavings. Incredibly, a copy of Jules Verne’s Twenty Thousand Leagues Under the Sea was sitting on a back table (Boston: Smith, 1875) for $15.00. I didn’t realize until I got it back to the office, that it was worth hundreds of dollars. We enjoyed taking the profit, but I admit to feeling a twinge of conscience that the charity sponsoring the sale received so small a share of it.

At another large $1.00-a-book sale, people would start lining up several hours before opening; one woman slept overnight in her van in the parking lot. In what was a near-mob situation of slathering booksellers waiting at the door, somebody grabbed my arm to yank me out of their way. When I turned around, I didn’t see a bookseller, someone who thinks, what I saw was a greedy guy, waiting to steal some totally undervalued book, from a library that could surely use all the money they could raise. People don’t line up for hours at a $1.00 book sale to buy books worth $1.00. They line up because the library is “giving away the store” big-time, and they want a piece of the action for themselves.

This is particularly upsetting to me because I believe libraries are sacred spaces. I haunted the 23rd Street Library in New York, which was housed in a building that resembled some medieval castle, and the first time I went to the 42nd Street Library reading room I felt like a pilgrim who had just walked into the Holy of Holies. I’ve been in the stacks at New York University and Columbia and Brandeis, and stood awestruck in the Library of Congress.