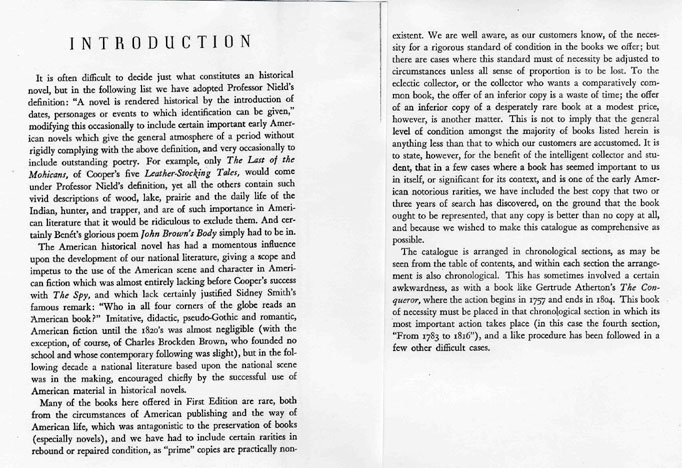 Scribner's felt good about this catalogue and rightfully so.


The finds four matches ranging from $2,500 to $5,000 for copies that are not identical.? In looking at these choices it is useful to select the sort by "newest" to see who has been out there the longest. ?It turns out to be the highest priced copy suggesting that price may be holding that copy back.? The Legend of Black Rangers doesn't show up at all.

The Fifth highest is D. P. Thompson’s The Green Mountain Boys published in 1839 in two volumes.? Scribner says of this book, “Of the greatest rarity in any condition” and prices them at $165.? They must have known that a tough copy would be available in when I looked recently.? The condition of this set would not disappoint Scribner's opinion.? It’s now sitting next to me in a custom box that serves the purpose of the mask for the man in the iron mask.? At $335 net I have a fragile gem.

Sixth, Seventh and eighth are books at $150:? William A Carruthers' The Knights of the Horse-shoe, 1845; William Gilmore Simms" The Yemassee, 1835; and James Fenimore Cooper's The Last of the Mohicans, 1826.

Mr. Carruthers"book is not available on ABE in the first edition though there are three copies found in a title search of "The Knights of the Golden Horse-shoe" for a 1970's reprint.? Mr. Simms" The Yamassee was available in a single copy of the first printing and I bought it for $255 delivered.? The seller indicated he had had the book for a while and had been asking $350.? The first edition of Cooper's The Last of the Mohicans is not available but a second edition is and it is $3,500.? Wow.? I live in fear that a first will show up.? It’s also quite possible this second edition is over-priced.

There are 217 other books in this catalogue, many of which are inexpensive. In fact ninety –eight of them are $10 or less in the original catalogue.

Within a day of starting work on this project I began to systematically look on line for most of the items. When an available copy appeared to be similar to the Scribner copy I then looked at the price difference. When this difference was small enough I tended to inquire further about the copy and the availability of a better price. In the course of a solid week I purchased about 40 of the 228 titles for about $3,000. A few of these books were among the great rarities in the Scribner catalogue and others were absolutely common but looked interesting to read. Most are of course in between. Click HERE To Access the American Historical Novels Collection No.1