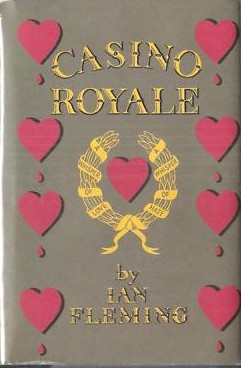 The person prescient enough to have spent 10/6 (give or take a $1 in today's money) in the spring of 1953 on a UK hardback first of Casino with an unclipped dust jacket and sock it away in pristine condition, today might well be asking $40,000 to $70,000, conceivably more if the book is signed by the author, his friends, or any of an ever growing list of male and female movie personalities who played the characters he created.

While Casino leads the monetary parade, the values of the volumes that followed are only slightly less eye-popping. Given that time seems only to have increased both value and demand it is well worth knowing a thing or two about these books, especially now, as the attics and cellars of the English speaking world empty out onto the Internet.

For the bookseller or collector interested in Bond a good place to start is the FIRSTS MAGAZINE November 1998 issue devoted to collecting Ian Fleming. This is a solid read with the lead article by Lee Biondi (who was at that time the manager of Heritage Books in Los Angeles, and has since gone on to head his own firm www.biondirarebooks.com).

Not only does Biondi set Fleming in a cultural and literary context, he also teams with fellow bookseller James M. Pickard www.jamesmpickard.com to produce a nifty descriptive bibliography picturing the UK & US firsts including all 14 titles and points as well as estimates of their 1998 market values. He also notes some of the variants and pictures the covers of many pirate editions. In 1998 he estimated a UK Casino 1st in fine condition at $15,000; Live and Let Die (first state with dj) $8,500 and right on down the line to a fine Octopussy UK 1st at $125.

Ten years later, in November 2008, Biondi updated his initial FIRSTS offering with a second bibliographic commentary noting that the Bond novels and short story collections have never been out of print and that 2003 marked the jubilee year for Fleming and his work. This event was celebrated with a critical symposium at the Lilly Library at the University of Indiana (the repository for Fleming's papers). In 2008 he added additional bibliographic points and substantially raised his estimates. His new valuations of Fleming's UK 1st editions started with Casino at $50,000, Live and Let Die at $32,500 and ended with Octopussy at $300.

For even more recent numbers here are a few 2009-2010 auction prices realized for a UK edition of Casino from the AE data base:

Not quite as astronomical but still respectable are some selected eBay sales in November and December of 2010:

* Taiwan pirate edition of Casino Royale with its distinctive harlequin dust jacket sold for $78.77 after 11 bids

* Too Hot to Handle the US Perma book paperback issue of Moonraker with a good girl art cover realized  $62.50 with seven eager bidders vying for the prize.