Books About Books from Oak Knoll 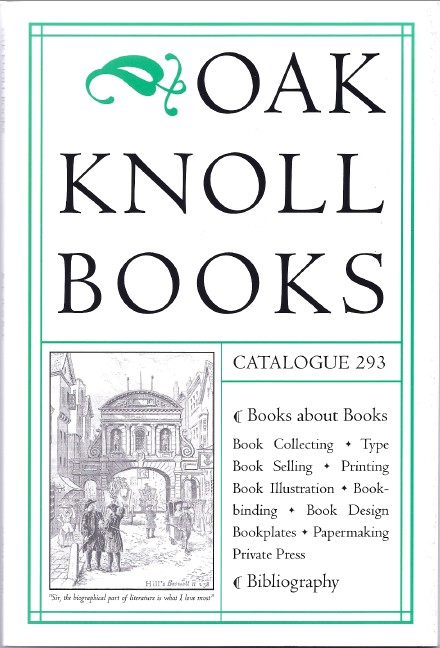 Oak Knoll Books has released its Catalogue 293 of Books About Books. It is divided into two sections. The first covers the broad range of books about books, including fine printings, bindings, papermaking, design, etc. The second section is devoted specifically to bibliographies. Oak Knoll has been a leader in this field for 30 years, and once again they are offering an outstanding selection from their extensive inventory. These are a few.

Here is one of those bibliographies, and it is a thorough accounting of works related to one of those places where no one wants to live, but fascinates us anyway - the Arctic. Why so many attempted to explore this bitter place is hard to fathom, but they did, and wrote lots of books about it. Item 233 is Arctic Bibliography, edited by Marie Tremaine and published by the U.S. Department of Defense under the direction of the Arctic Institute of North America in 1953. The three volumes include 20,003 titles, and these are just of works published through 1949. Listings are provided in both author and subject alphabetic order. Priced at $475.

Item 162 is one of those 20,000 books, Farthest North. Being a record of the Voyage of the Ship "Fram" 1893-1896... by the mission's leader Dr. Fridtjof Nansen. Nansen was more than an explorer, being a scientist and diplomat as well, earning the Nobel Peace Prize in 1922 for his work with the League of Nations. However, in the 1880s and 1890s he was focused on exploring the north. Nansen set the "Fram" into the Arctic ice, believing it would drift over the North Pole, a goal that had not yet been reached. He proved wrong, so he and Hjalmar Johansen left the ship and set out on foot. They did not attain the pole, but did go farther north than anyone else had before, then had to winter over on an island before finally reaching a British camp a year later. The "Fram," like Nansen, would also be involved in future adventures, it being the ship used by Roald Amundsen's expedition which was the first to reach the South Pole in 1911. Nansen's book was published in 1897. $300.

Item 78 is a look at one of the more interesting literary forgeries, poems supposedly by an antiquarian poet actually written by a youth who, by today's standards, was barely of high school age. The book is Poems, Supposed to have been Written at Bristol, by Thomas Rowley and Others, in the Fifteenth Century... by Thomas Warton, published in 1777. Rowley was supposed to have been a monk from three centuries prior, but in reality, "he" was the best known of several pseudonyms used by Thomas Chatterton. Many were fooled by the antiquarian style Chatterton used in his poems, but Warton, himself a noted poet of the time, was suspicious. Chatterton, who spent most of his time holed up in his room writing, supposedly discovered these antiquarian works. He was something of a loner and unusual person, and the pressures of life evidently proved too great. He committed suicide at the age of 17, but it took several years before suspicions about the authenticity of "Rowley's" poems led to serious questioning. $350.

Despite Warton's expose, many remained convinced of the authenticity of "Rowley's" poems, and so in 1782, Warton wrote another book in response to some of "his" defenders: An Inquiry into the Authenticity of the Poems Attributed to Thomas Rowley. In which the Arguments of the Dean of Exeter, and Mr. Bryant, are Examined. $750.

Item 268 is the Catalogue of the Library of Edward Gibbon, Author of The Decline and Fall of the Roman Empire, Left by Him at Lausanne. Gibbon was a student and scholar as well as a writer, and many of the books used to research his greatest work were found in his library. However, the timing of this sale is rather perplexing. It took place at Sotheby's in 1934, though Gibbon had died in 1794. The 140-year delay can be explained by what happened to many of his books after Gibbon died. A large part of his library was purchased by the eccentric and very wealthy collector-politician-writer William Beckford. Beckford passed the books down largely intact until they ended up with a French dealer, who put them up for auction in 1934. $150.

Oak Knoll Books may be reached at 302-328-7232 or orders@oakknoll.com. Their website is www.oakknoll.com.

You will find many of Oak Knoll's books listed in "Books For Sale" on this site. Click here.