The History of Ideas from Rudi Thoemmes Rare Books 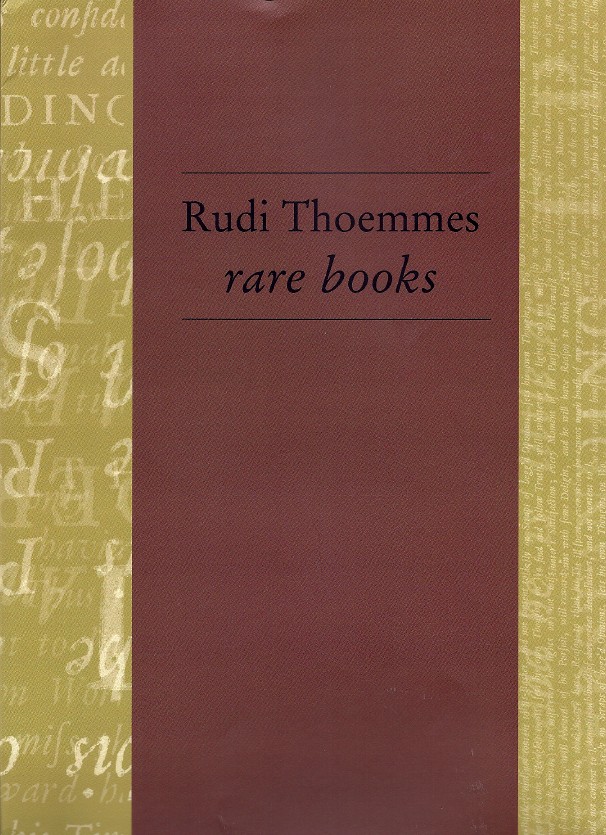 New acquisitions in the History of Ideas from Rudi Thoemmes.

Rudi Thoemmes Rare Books has issued a catalogue of new acquisitions in the History of Ideas. This is a catalogue filled with erudite thoughts, from great philosophers like Kant and similarly abstruse thinkers, to those in science, mathematics and the like. However, "ideas" is not necessarily synonymous with "good ideas," so there are a few strange works included to provide balance. So, put on your thinking cap and take a look inside.

Item 6 is a pair of works from Rene Descartes bound together: a first edition of Principia Philosophiae (1644) and the Latin translation of Discourse de la Methode (1637). The latter was the first appearance of the words for which Descartes is best remembered - "cogito, ergo sum" (I think, therefore I am). Descartes was a philosopher, scientist and mathematician. He influenced virtually everyone in each of those fields who followed him, though his reliance on rationalism became dated in the years that followed. Priced at £8,000 (British pounds, or approximately U.S. $12,298).

Item 40 is the first book from Bertrand Russell, who would continue writing for almost another three-quarters of a century. Russell is known for two focuses in his life, philosophy and politics. His writings on logic and philosophical topics were the basis of his great reputation in academia, but his political views perhaps made him more of a household name, albeit controversial. He probably offended just about everyone at some time or another, his 97-year lifetime giving him plenty of opportunities to upset people. Mostly, he was on the left, and this first book, a collection of lectures given in Germany, came in reaction to oppression by that nation: German Social Democracy. Six lectures, published in 1896. £550 (US $845).

Item 33 is a German translation of the first three (of six) volumes of James Burnett, aka Lord Monboddo's Of the Origin and Progress of Language (Des Lord Monboddo Werk... in German), published 1784-85. Monboddo was an eccentric Scottish judge who studied comparative linguistics. Thoemmes notes that Monboddo is known primarily for one thought - that orangutans were some sort of uncorrupted, speechless humans. Actually, he was noted for another belief he later abandoned, for which he was subject to ridicule, that men once had tails. However, for all his strangeness, some now recognize Monboddo as one of the earliest evolutionists. He saw humans developing greater abilities as language evolved from simple to complex, and theorized that human ancestors were more ape-like (though he did not connect humans/apes with other species). We do not know whether Charles Darwin was familiar with Monboddo, but his grandfather, Erasmus Darwin, who had his own evolutionary theories long before Charles and was influential in the latter's thought, admired Monboddo. And unlike Erasmus, Monboddo's theories were closer to the mechanism of natural selection than those of Erasmus. £2,000 (US $3,074).

We appear to be in a period of great anti-government agitation, but most of it merely seems to be one side or the other promoting government intrusion to support its interests, not true opposition to government involvement. Max Stirner, real name Johann Kaspar Schmidt, truly believed there should be no government involvement in people's lives. Item 46 is his Der Einzige und sein Eigenthum (the Ego and Its Own), published in Leipzig in 1845. Stirner was an anarchist, rejecting the state and its laws. The government, he believed, had no responsibility for the members of society. Those people, he believed, would form "associations of egoists" to promote their self interest, but only to the extent it served those personal interests. The result was that Stirner opposed government interference even in the area where today's "anti-government" activists support unlimited intervention, to preserve private property. To Stirner, property belonged to whoever was strong enough to take it through his own power - "Whoever knows how to take, to defend, the thing, to him belongs property." £1,250 (US $1,932).