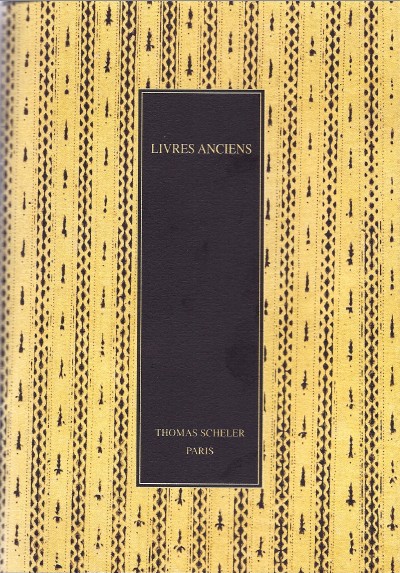 Some antiquarian books from Librairie Thomas-Scheler.

Librarie Thomas-Scheler has issued its 40th catalogue of Livres Anciens (Antiquarian Books). These are primarily French books though many are first or French editions of books that were first published elsewhere and in different languages. Consequently there will be works here of interest to a variety of collectors, Americana ones in particular, as much of the early exploration of North America was conducted by the French. These are some of the interesting and important books you will find in this latest collection of rare and antiquarian books.

Item 122 is a second edition of one of the most important scientific tracts ever written, Isaac Newton's Philosophiae Naturalis Principia Mathematica. Great minds of the previous century had made enormous advances in terms of observation. Galileo, Kepler and Copernicus had recognized that the Earth was not the center of the universe, Galileo in particular figuring out what astronomical observations meant. However, it was Newton who devised the theories that explained why what was observed happened. The Principia reveals the laws of motion and gravitation that explain why the universe behaves as it does. Newton published his first edition in 1687, but the popularity of his theories made that book rare and difficult to find. For years, Newton prepared for a second edition, as he had numerous adjustments to make, but he was a busy man with many tasks to focus upon. It was not until 1713, and with the help of some friends, that Newton's revised second edition was finally published. Priced at €30,000 (roughly $40,541 in U.S. Dollars.

Item 15 may not be quite as well known a scientific work as the Principia, but it was a major advance, considering it came out just as Europe was emerging from the "Dark Ages." It is L'Histoire de la nature des oyseaux, the natural history of birds, by Pierre Belon. Thomas-Scheler describes this as the first French book of scientific ornithology. Belon was not limited to studying the literature, but had taken a three-year journey around the Mediterranean nations where he collected his observations. It resulted in several books, including this 1555 first edition. However, this book is notable not just for its presentations of birds, but as being the first comparative anatomy. Belon compared the avian skeleton with that of the human, the similarities of which must have made some people wonder in this time three centuries before Darwin. €25,000 (US $33,793).

Speaking of Darwin, here is a scientist who might he considered somewhat of a precursor to the great evolutionary theorist, though he is far better known for literature and poetry. Johann Goethe was one of the great minds of his time, best known for Faust. However, he wrote books of science, such as this one, Versuch die Metamorphose der Pflanzen zu erklären (metamorphosis of plants). Goethe was already well aware of the anatomical similarities between species described by Belon so many years earlier, and in his look at plants, he concluded that they could change over time. However, this was still a very limited theory, not based on natural selection, nor applying to the level of change that could turn a rodent into a human, or a dinosaur into a bird. Of course, Goethe did not have the benefit of extensive knowledge of fossils or observation comparable to Darwin's, nor would he have had any idea of how enormous an amount of time had elapsed since life on Earth first appeared. Item 73. €1,200 (US $1,628).

Some of the most notable early explorations of North America were conducted by Robert Cavelier de La Salle, the French explorer. He traveled deep into the interior of what is now the United States at a time when only natives lived in the area. He traveled around the Great Lakes, down the Ohio River, and in his most notable expedition, took canoes down the Mississippi River all the way to the Gulf of Mexico. He claimed the large area for France, calling it "Louisiana" for King Louis XIV. However, his last expedition, intended to take him from France to the mouth of the Mississippi, where he would set up a colony, did not turn out so well. He missed his mark, landing in Texas. His settlers were not happy, and after several attempts to locate the river, his unhappy followers assassinated him. Texas was not such a popular destination then. That's where this next book comes in. Author Henri Joutel had been placed in charge of the colony during La Salle's absences, and though he expected a similar fate, was spared. Instead, he and some followers headed back east, found the Mississippi, and proceeded up the great river and then all the way back to Quebec. He recounts his many adventures in this book published in 1713, Journal historique du dernier voyage que feu M. de la Salle fit dans le Golfe de Mexique... Item 89. €18,000 (US $24,305).