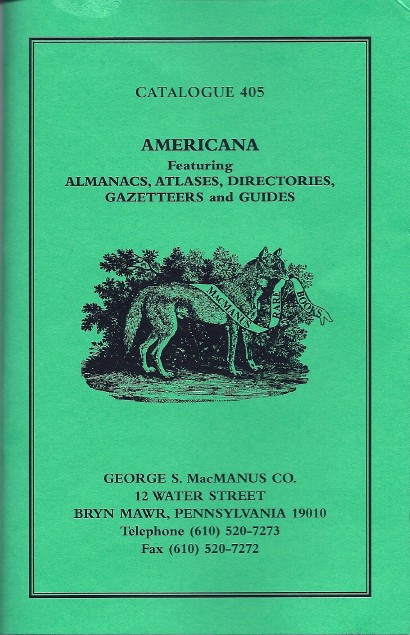 The George S. MacManus Company has published a new catalogue of Americana Featuring Almanacs, Atlases, Directories, Gazetteers and Guides. There is a particularly large group of city and town directories and guides from the 19th century. These were the books that told you who lived in a city and where, what the businesses were, and how to get around. They mostly disappeared or lost their importance in the 20th century, probably replaced when the invention of the telephone brought about telephone books and yellow pages to take over their role. However, the guides tended to be more informative about their towns and cities and today offer a look at the details of a location during their era.

Item 333 is Thomas Stephen's directory of Philadelphia from long ago: Stephen's Philadelphia Directory, for 1796. Along with detailed information about the city and its residents and locations, it contains information about organizations such as the Public Library and Humane Society, and one that is no longer necessary, the Abolition Society. Among the many forgotten residents of the city in 1796 is one we all remember, "Washington George, President of the United States, 190, High Street." This was before the city that bears Washington's name was built, and the then President lived in modest housing compared to today's White House, which he rented from Robert Morris. It would also serve as John Adams' "White House," but it was torn down early in the 19th century and no one knows exactly what it looked like. Priced at $4,500. Item 334 is another copy, priced at $1,500.

The nation's capital had long since moved south when Rae's Philadelphia Pictorial Directory & Panoramic Advertiser was published in 1851. This rare item was one of the most impressive of directories to be published. Author Julio Rae devised a new advertising plan. He provided a panorama display of the buildings on eight blocks of Chestnut Street, both sides, in downtown Philadelphia. Text was provided with the illustrations of all those who advertised in the directory. Among the merchants to be found were jewelers, tailors, grocers, druggists, picture framers, daguerreotypists, Welch's National Circus and Theater, and P.T. Barnum's museum. The latter would be destroyed by fire later that year. Rae intended to publish new editions of his fabulous directory annually, as well as preparing one for Market Street. However, the undertaking was apparently a bit too ambitious as no others were produced. Item 324. $5,000.

Item 14 is a copy of Poor Richard Improved, though evidently not enough, Benjamin Franklin's almanac for 1749. This was the first printed by Franklin's partner David Hall, and Franklin discovered a couple of egregious printing errors. In the 1750 edition, speaking of this issue, he wrote, "This was Mr. Printer's Fault; who being also somewhat niggardly of his Vowels, as well as profuse of his Consonants, put in one Place, among the Poetry, mad, instead of made, and in another wrapp'd, instead of warp'd; to the utter demolishing of all Sense in those Lines, leaving nothing standing but the Rhime." $12,500.

Not to take anything away from its importance today, but in 1819 Cincinnati was likely America's most important inland city. In the days when travel and trade was mainly accomplished by river, its location on the Ohio was of great importance. Item 277 is the first Cincinnati directory, Cincinnati Directory, Containing the Names, Profession and Occupation of the Inhabitants of the Town, Alphabetically Arranged... It contains details about its residents and businesses, their locations, trade, foundries, and the steamboats and canals in the area. A map illustrates the city blocks. $3,000. Item 278 is another copy, $2,250.

Item 52 is the 1908 Atlas of the Rural Country District North of New York City Embracing the Entire Westchester County, New York. Also a Portion of Connecticut. Greenwich, Stamford, New Canaan, Darien, Wilton and Ridgefield... These are hardly rural communities today. Rather, they are some of the most expensive suburban communities in America. $1,250.