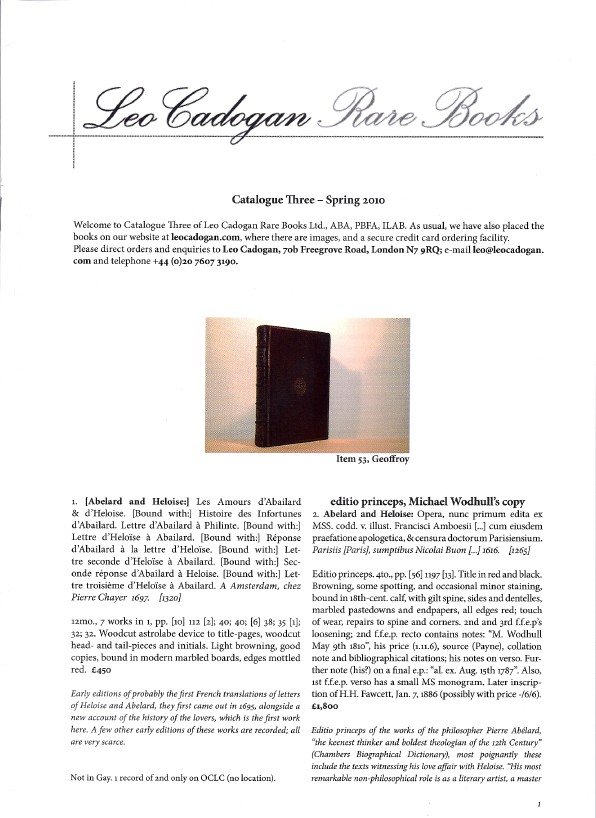 A collection of antiquarian works from Leo Cadogan.

London bookseller Leo Cadogan Rare Books has issued Catalogue Three - Spring 2010. Cadogan offers a variety of antiquarian texts, most from continental Europe, and mostly very old (16th-18th century). Matters of church are the most common, but others cover state, law, science, business, education, and whatever else might have been on people's minds in those long ago times. We will take a look at some of these rare, and sometimes unusual, items.

You might think environmental regulations are something new, but this decree from Cosimo I, Grand Duke of Tuscany, says otherwise. His Decreto delli Molto Magnifici adopted laws that "the mountainous places are not ruined, and remain thick and full of that great quantity of trees which Nature itself gives for their ornament and covering." However, the Grand Duke did provide for some balance, offering moderation of the laws' effect by reducing fines in certain Alpine communities. The date of this proclamation was 1569. Item 86. Priced at £340 (British pounds, or about $522 in U.S. dollars).

Item 25 is a 1719 dissertation on widowhood by Dietrich Ekard, Legem Hiddae de sacco... The author notes medieval law from his hometown of Eilenburg that required a widow be sewn into a sack before remarrying. Cadogan does not explain the logic behind this law, but undoubtedly it makes perfect sense. Among other issues raised is whether a widow is still married if her husband is resuscitated, perhaps something we should be giving more thought to with the prevalence of such things as heart defibrillators. If a husband or wife technically "dies" for a few moments, can the spouse legally claim his/her freedom (and inheritance)? £340 (US $522).

Item 41 is a medical dissertation, Dissertationem historico-physicam... by Friedrich Jahn. This is a 1674 second edition (first was 1667) of what Cadogan describes as an "unusual meteorological treatise." It deals with unusual types of rainfall, including cloudbursts of falling blood, flesh, wool, frogs, metals, milk, and bread. These accounts came from the 16th and 17th centuries in various countries, and evidently, Jahn took them quite seriously. He figures they may have had supernatural causes, a reasonable assumption under the circumstances, and that they could either come from God or the Devil. I would guess the milk and bread probably came from God, but the flesh and blood likely had the other source. Jahn also tries to figure out what these events portend for the future. £375 (US $576).

Item 54 is a lengthy, apparently unpublished manuscript biography of Pope Sixtus V (and though it has been over 400 years since his papacy, no Pope has yet selected the name Sixtus the Sixth). Sixtus had been on the outs with the previous Pope, but once elevated in 1585, he quickly took charge. He cleaned up the enormous amount of crime in the Papal States, although even the Catholic Encyclopedia says he at times used "excessive cruelty." He quickly put the Church's finances, left in shambles by his predecessor, in order, while still managing to spend great sums on improving public works. He raised taxes and sold public offices to pay for them, and when he died just five years later, the treasury had a large surplus. Sixtus hoped to see the end of Queen Elizabeth's rule in England, and stood ready to provide aid to the Spanish Armada had they been successful against Britain. Instead, their terrible defeat took place during his papacy. Sixtus had many other projects on his mind, such as defeating the Turks, conquering Egypt, and bringing major changes to the Jesuits whom he distrusted, but death stepped in the way in 1590. This 248-page biography was created in Italy around 1700. £950 (US $1,459).

Here is another one of those scientific works that make you wonder about the quality of science at the time: De transformatione hominum in bruta... by Friedrich Moebius. This is a 1673 academic thesis on the transformation of men to animals, wolves in particular. Much of the responsibility for this was apparently placed on the Devil. Item 59. £475 (US $730).

Item 17 is a document confirming the appointment of one Sieur de la Rue as a customs magistrate in Bruges, Belguim, in 1787. Along with his salary, the magistrate was granted a tax exemption on 16 1/2 sesters of wine (a sester is around a quart) and 400 tonnes of beer. That's a lot of beer, especially for a judge, who is supposed to be sober as one. £325 (US $499).