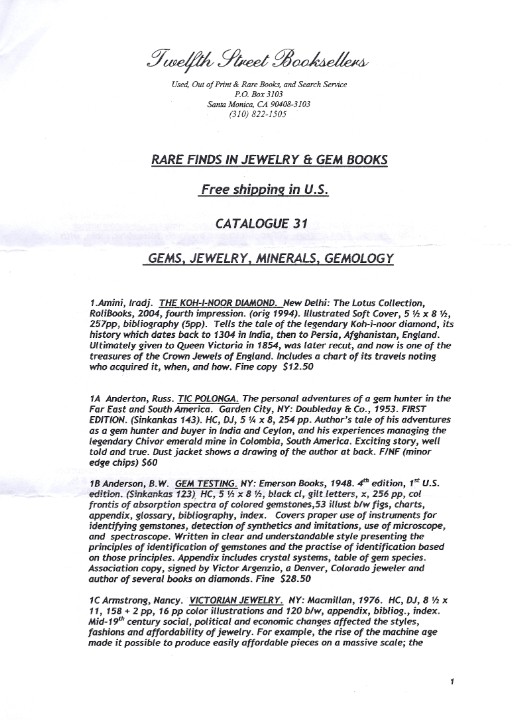 We have received a new catalogue from Twelfth Street Booksellers, Catalogue 31 of Rare Finds in Jewelry & Gem Books. This is a catalogue not only for collectors of gem books but for those actively involved in the trade - jewelers, historians, appraisers, designers, and institutions. There also are works that will appeal to those who collect fine books, as some of these items take on the beauty of their subjects. Here is a look at some samples of what is inside the covers.

Item 20 is Joan Evans' A History of Jewellery. 1100-1870, published in 1953 (first U.S. edition). Twelfth Street describes this as "the authoritative work" on the history of jewelry from medieval times to the 19th century. Priced at $150.

For those needing to know everything there is to know about pearls, item 34 is George Kunz and Charles Stevenson's "monumental work on pearls:" The Book of The Pearl. The History, Art, Science, and Industry of the Queen of Gems. This is a first edition, published in 1908. Quoting from John Sinkankas' bibliography of gems, this book "...is prized not only for the enormous amount of reliable information that it contains...but also for the large number of high quality illustrations in color and black and white..." This is one of those books that doubles as a source of information and object of artistic design. $1,500.

Dr. Kunz was equally thorough in his tome on rings: Rings for the Finger. From the Earliest Known Times to the Present. This is also a first edition, published in 1917. It covers all types of rings, from wedding to magical to healing rings. Sinkankas says of this work, "It remains the largest single storehouse of information on rings available in any language." Item 33. $250.

Item 16 is Ger Daniels' Folk Jewelry of the World, a 1989 first edition. It is filled with hand-drawn illustrations of jewelry worn by natives of many different lands. Twelfth Street notes the surprising similarity of designs in the jewelry worn by peoples with no apparent contact with each other. It is similarities such as these that led an earlier generation of anthropologists to believe people from distant lands must be descendants of one of the lost tribes of Israel. $85.

Item 5 is G.H. Baille and Ilburt Clutton's Britten's Old Clocks and Watches and Their Makers, a 1956 seventh edition of a book originally published in 1894. This edition was completely revised from the sixth edition of 1933 to be more understandable to the average collector. It describes the various parts of their complicated mechanisms and lists nearly 14,000 watch and clock makers. As a totally unrelated aside, none of my children wear watches. They use their cell phones to tell time. Then again, mine uses a battery instead of a spring. Time marches on. $65.

Lillian Cole, proprietor of Twelfth Street Booksellers, has revealed three hidden "gems" to us in this catalogue, which we will uncover in hopes not to be breaking any confidences.

Item 60. A History of the Crown Jewels of Europe, by Lord Twining. First edition, published in 1960. This one is a "monumental work that took Lord Twining 30 years to complete." It covers 17 centuries with 27 chapters, each presenting a different European country, from Austria to Yugoslavia. This is how royalty displayed its status. $925.

You will find many of Twelfth Street Booksellers' books listed in "Books For Sale" on this site. Click here.