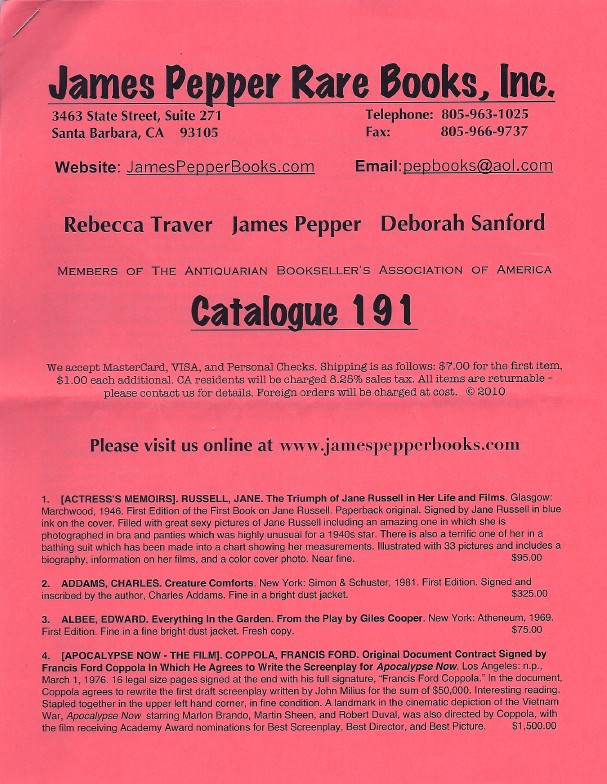 James Pepper Rare Books has issued Catalogue 191. It offers books and ephemera in the fields of film, literature, and mystery, with an occasional item outside the box of their usual specialties. Here are a few of the items available this time around.

What happens to a book that is inscribed to a couple that is no longer a couple? It generally ends up with a third party, as neither of the recipients are likely to want to keep it. Item 5 is a copy of Sun and Shadow, written by the noted French actor Jean-Pierre Aumont. Aumont was a prolific actor, appearing in dozens of films over a 65-year career, as well as fighting with the French resistance during the Second World War. This book is his autobiography, published in 1977 (it is incomplete as he acted for another 20 years and lived another 25). It is inscribed to film director Peter Bogdanovich and his companion at the time, actress Cybill Shepherd, whom he had directed in The Last Picture Show. Within a couple of years, they were a couple no more. Priced at $95.

Here is an item from a couple that did work out. Arthur Miller was a writer while Inge Morath was a photographer. They met while she was photographing still shots for the 1961 film The Misfits, written by Miller and starring his then-wife Marilyn Monroe. Monroe led a troubled life and her relationships, including that with Miller, were ultimately doomed. However, after their divorce, Miller remarried photographer Morath, a very successful union that lasted until her death 40 years later. Item 92 is a copy of In Russia, a book written by Miller published in 1969 about their visit to what was then America's arch enemy. Morath provided the photographs. Both Miller and Morath have signed the book. $125.

We'll complete this section with one more couple, neither one that got married and lived happily ever after or one that broke up. This one is something in between. Item 62 is an inscribed copy of Zane Grey's most famous western novel, Riders of the Purple Sage. This is a Special Deluxe Tenth Anniversary Edition printed by Harpers in honor of their most successful author at the time. Grey has inscribed this book to Mildred Smith, and there is a photograph of Smith on horseback in Monument Valley, next to a riderless horse, affixed to the front pastedown. That was likely Grey's horse and he was the photographer. Smith was Grey's assistant, and a little more - his mistress and lover for many years. However, Grey had a wife and other lovers along the way. Perhaps he was the Tiger Woods of his day. Success can do things to people. Smith was the favorite of the lovers the western author accumulated along the way. $4,000.

Item 148 is Tennessee Williams' first published play, Battle of Angels. It appeared in the spring 1945 edition of Pharos, published in Murray, Utah. It was not a notable success, and this might have seemed an inauspicious start for the writer. Fortunately, Williams' Glass Menagerie was debuting on Broadway the same year, and that would make up for any disappointment he might have experienced over this work. $450.

Item 69 is a thorough study of one genre of film, which was covered from the year 1927 to what was at the time of publishing the present (1981). Why only starting at 1927? The answer is that this was not about westerns, or dramas, or comedies. The genre Clive Hirschhorn covered was The Hollywood Musical. You could have silent versions of comedies and dramas, but a silent film version of a musical just wouldn't have cut it. $95.

Item 88 is David Mamet's early (1978) paperback work Sexual Perversity in Chicago and The Duck Variations. That sounds really perverse, but it's not quite that bad. The Duck Variations is a second play, not a continuation of the title of the first. $75.