The West and More from Gene W. Baade 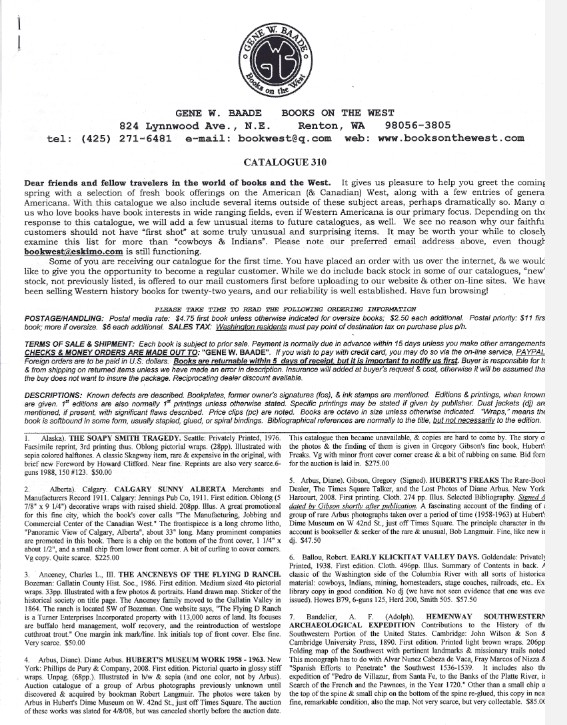 Gene W. Baade has issued Catalogue 310 of Books on the West. Baade notes that this catalogue contains some items beyond "cowboys and Indians," including more general Americana and a few totally unrelated items. Nonetheless, it is western America (including Canada) that is the focus of Baade's catalogues and this is no exception. Here are a few samples.

Here is a title so long that you might think it would take three weeks to write it, but in reality, the entire book was written in just three weeks: The Life, Times and Treacherous Death of Jesse James. The only correct and authorized edition. Giving full particulars of each and every dark and desperate deed in the career of this most noted outlaw of any time or nation. The facts and incidents contained in this volume were dictated to Frank Triplett by Mrs. Jesse James, wife of the bandit, and Mrs. Zeralda Samuel, his mother. Consequently every secret act, every hitherto unknown incident, every crime and every motive is herein disclosed. Truth is more interesting than fiction. Author Frank Triplett whipped this biography out in just three weeks from the time James was assassinated, taking advantage of the great interest in the infamous bandit (in hindsight, we know such a rush was unnecessary as interest in James remains intense almost 130 years later). However, Triplett's book remains controversial. Despite the title's claim, James' mother and wife denied they had participated, a claim made dubious by the fact they shared in the book's royalties. They may have been concerned that statements attributed to them implicating Jesse's brother Frank could hurt him in his upcoming trial. Not only were the James women unhappy with the book, but Governor Crittenden is also said to have suppressed it as Triplett charged him with complicity in James' murder. The result is that first editions, such as this (1882), are quite scarce. Item 150. Priced at $2,500.

A decade after the James Brothers, and their cohorts, the Younger Brothers, rode for the last time, some relatives of the Youngers, the Dalton Brothers, took up the trade. The three Dalton Brothers led a gang that was skilled at robbing trains. However, when they attempted to extend the franchise into bank robbery, they were not so skilled. It was perhaps a particularly bad mistake to rob two banks in their hometown of Coffeyville, Kansas, where despite the fake beards and wigs, they were quickly recognized. In the ensuing shoot-out, two of the Daltons were killed, while the third brother, Emmett, shot twenty-something times, survived. He survived to spend 14 years of a life sentence in prison before being pardoned. That was 1907, and Dalton later married his childhood sweetheart, moved to Hollywood, played himself in the movies, and became a building contractor. He also became an author, and item 26 is a first edition of his book When the Daltons Rode, published in 1931. Dalton lived not far from another famed western gunslinger in Los Angeles, Wyatt Earp, and while we do not know whether the two ever met, both were friends of the most notable western actor of the 1920s, William S. Hart. Dalton died in 1937 at the age of 65, his body broken down, in part due to his gunshot wounds of four decades earlier. $395.

Item 20 is The First Hundred Years of Nino Cochise. The Untold Story of an Apache Chief. This is a bit of an exaggeration as Ciye Nino Cochise was only 97 when this book was published in 1971, but he made up for it by living to 110. Nino was the grandson of the legendary Chief Cochise, born the year his grandfather died. His band of Apaches (the Chiricahua) were mostly carted off to Fort Sill and their reservation disbanded by whites after Cochise's death, but Nino tells of his surviving with others who escaped on a mountain ledge community in Mexico for years. Eventually, he returned, and ended up playing in movies, even reprising the role of his grandfather on film. $50.

Item 28 is The Life and Death of Julia C. Bulette "Queen of the Red Lights," by Zeke Daniels and Ben Christy, published in 1958. Ms. Bulette's appellation did not come from her being a traffic cop, though she was an honorary member of the Virginia City fire company. Men liked her. Apparently, they liked her a lot, enough so that she is probably still the most famous lady of the red light profession ever to arise from Virginia City, which had a lot of them back in the day when Ben Cartwright and his sons were running the Ponderosa. Sadly, a drifter one day wanted too much from Miss Julia, taking, along with her honor, her possessions and life. The latter he took most brutally, but justice prevailed for her and him at the end of a rope. $27.50.