Book Arts, Printing, Hoaxes and More from The Veatchs Arts of the Book 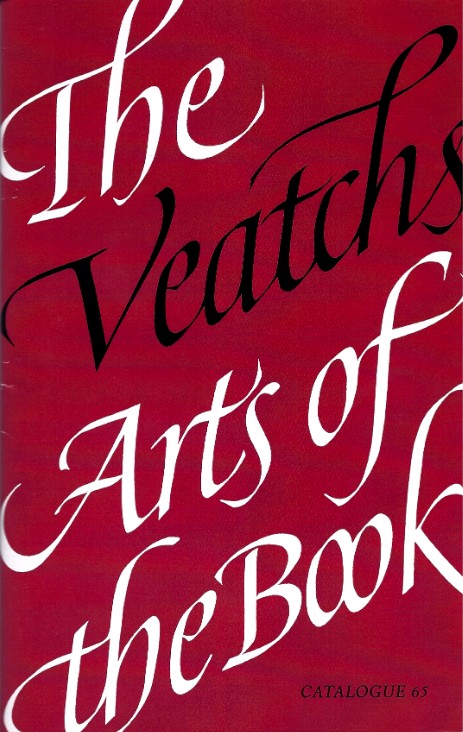 More artistic books from the Veatchs Arts of the Book.

The Veatchs Arts of the Book has released a new catalogue, Catalogue 65. This issue features Book Arts, Fine Printing, The Fortsas Hoax, The Chamberlain Press, and Seven Early French Printers' Manuals. The last three of those are very specific topics, while most books fit in the more general categories of book arts and fine press works. These are books that are often more visual than textual, the type of books that will never be replaced by electronic texts. Here are some samples of what you will find offered this time by the Veatchs.

Item 5 is the last work of one of the most notable private presses of the early 20th century: Descriptive Bibliography of Books Printed at the Ashendene Press. This book is more than a simple bibliography, as it includes illustrations, facsimile pages, hand-colored letters, and a history of the press by Charles Hornby. Hornby opened the Ashenedene Press in 1895 and continued until 1935, the year this book was published. The last was the 40th book for Ashendene, though they also printed numerous ephemeral items. This last book was printed in a limited run of 390 copies signed by Hornby. It comes with its original prospectus, "A farewell notice." Hornby's press was located in Chelsea, England. Priced at $3,200.

Item 50 is the first of those French printers' manuals: La Science Pratique de l'Imprimerie, by Martin-Dominique Fertel. This manual has all the latest printing information as of its publication date of 1723. Text illustrations of model title pages are provided. $4,000.

Item 52 is a "second edition" of a catalogue that represents probably the biggest bibliographic hoax ever. In 1840, a catalogue was sent out to the greatest collectors in Europe. The title was Catalogue d'une tres-riche mais peu Nombreuse Collection de Livres Provenant de la Bibliotheque de Feu M.R. Le Comte J.N.A. de Fortsas. The collection offered purported to be that of one Jean Pichauld, the Count of Fortsas, a wealthy but obscure collector from Belgium. The Count had specialized in obtaining only the rarest of rare books, ones for which only one copy was known to exist, and which did not appear in any bibliographic records. Not surprisingly, he did not have a very large collection, just 52 books obtained over a lifetime, which ended the previous year. The great collectors were, naturally enough, fascinated by the descriptions of these 52 unique books, and on the appointed day, they showed up in the small Belgian town of Binche to bid. There was no auction. Nor was there a Count of Fortsas or 52 unique books. It was all a hoax, put on by one Renier Chalon, who enjoyed tweaking the upper crust of society. However, it turns out there was one very collectible book in Binche that day - Chalon's catalogue. It came to be reprinted numerous times as everyone seemed to want a copy. The edition offered here was published in 1863, and while it was certainly not the second time it was published, numerous counterfeits of this counterfeit collection having been published, it was the only reprint ever authorized by Chalon himself, which is probably why it is labeled as the second edition. $900.