Books of Western Americana and More from Back of Beyond Books 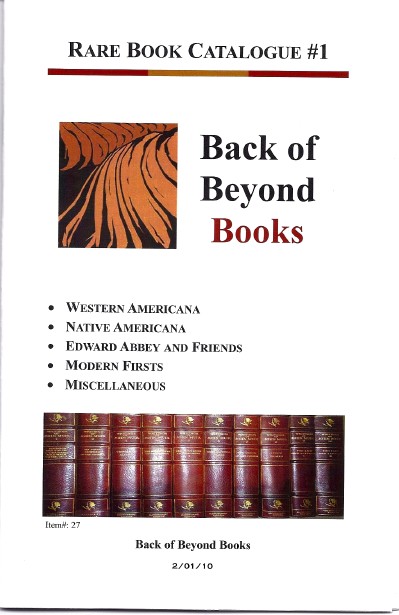 Catalogue #1 from Back of Beyond Books.

We have received Rare Book Catalogue #1 from Moab, Utah, bookseller Back of Beyond Books. Located in lightly populated southeastern Utah, a place perhaps better known for spectacular scenery, national parks, and mountain biking than books, Back of Beyond Books lists its specialties as Western Americana, Native Americana, Edward Abbey and Friends, Modern Firsts and Miscellaneous. They have been selling new books with a western orientation since 1990, but only opened a rare and antiquarian department in 2005. Moab is a center for exploring the West, from the popular Arches National Park to the obscure Canyonlands, from the Colorado River to desert landscapes to tall mountains, from fading ghost towns to millennium and older Indian petroglyphs, to ancient dinosaur quarries, it's all here. Now you can find the books about these wondrous sights here too. Here, now, are a few of these books.

Item 4 is a classic work of western exploration, Canyons of the Colorado, by John Wesley Powell. Powell's expedition of 1869 was the first to truly conquer the Colorado River, the first boat trip down the Green and Colorado Rivers and through the Grand Canyon. This account was published in a small run on a private press in Meadville in 1895. While Powell had published scientific reports many years earlier, this was his first complete account of this pioneering journey. Priced at $10,500.

Item 7 provides a caveat to the claims made above. Prospector James White claimed to be the first to ride the Colorado through the Grand Canyon, two years prior to Powell. Robert Brewster Stanton, the second (or third) to make such a trip interviewed White in his later years and prepared a manuscript about the latter's claim. It was published in 1932, ten years after Stanton's death, under the title Colorado River Controversies. Stanton concluded, as have most historians, that White's raft did not pass through the Grand Canyon. $1,200.

While Powell was probably the first to ride through the Grand Canyon by boat, other European-Americans had visited the site earlier. Item 22 is the Report Upon the Colorado River of the West by Lieutenant Joseph C. Ives, published by the Government Printing Office in 1861. Ives describes the river, the Grand Canyon, and the natives who inhabited the area. However, Ives was looking at the land from a practical rather than scenic viewpoint, so he concluded it was of little value. $1,200.

There is some serious climbing to be accomplished in the mountains of the American West, but nothing like this: Conquest of Everest. This is expedition leader Sir John Hunt's account of the 1952 climb that finally conquered the world tallest mountain, after years and many unsuccessful attempts. This first edition was published in 1954. The book includes Sir Edmund Hillary's account of the final ascent, where he and Tenzing Norgay became the first two people to reach the peak. This copy has been signed by Hillary and George Lowe, another participant in the expedition. Item 53. $1,200.

Item 40 is Edward Abbey's most famous work, The Monkey Wrench Gang. Abbey was an ardent environmentalist, though one who would be hard to pin down by today's political standards. He was virulently anti-government. He shared the NRA's intense belief in the right to private ownership of guns, though he had little respect for most hunters. He saw guns as a means of individuals protecting themselves from the government. With all of his passionate support for environmentalism, he had no problem with littering along the highways. To Abbey, the highways themselves were the real eyesore, not the litter. You might think today he would be a Tea Partier, but Abbey was equally zealous in his opposition to big business. He loved the natural landscapes of the west, and nothing angered him more than seeing it despoiled by industry, or anyone else for that matter. The Monkey Wrench Gang is a fictional account of what some might consider eco-terrorism, an odd assortment of individuals who attack the means of destroying the environment, such as heavy equipment. Abbey particularly targets the Glen Canyon Dam, constructed on the Colorado River just south of the Arizona-Utah border. It created Lake Powell, an enormous unnatural desert lake and favorite among boaters and other tourists in southern Utah, but which submerged much of Glen Canyon, a stunningly beautiful river canyon and one of the last areas of the lower 48 states fully explored. Abbey's preferences with regard to this controversial dam, which some would still like to see removed, are obvious. $2,000.