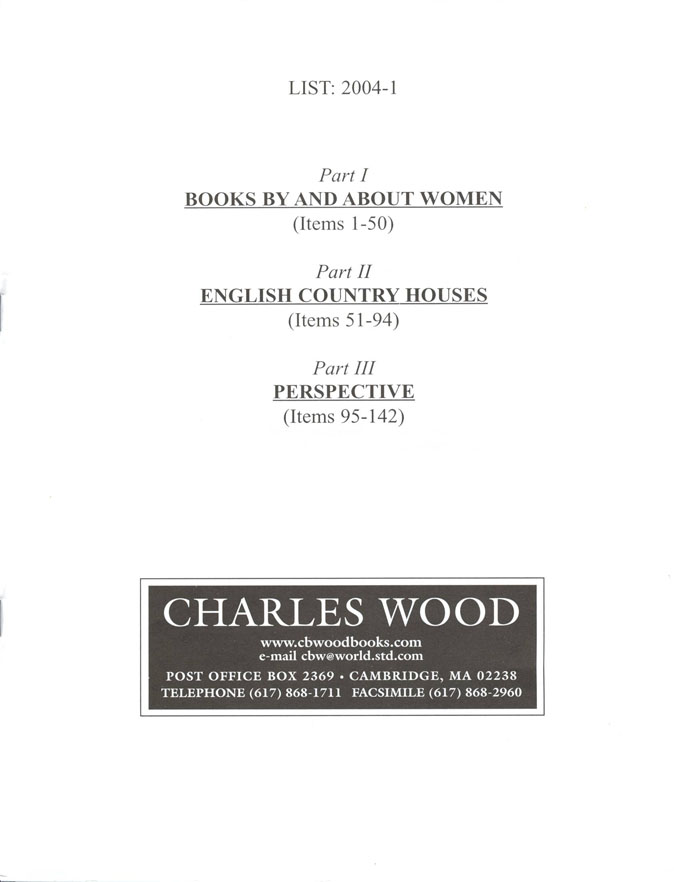 Books about women, country houses, and persective from Charles Wood

What do women, country houses and perspective have in common? For one, they are all topics of Charles Wood's latest catalogue (I must admit that I'm stumped as to what the second connection might be). This is a three part catalogue with the following headings: Part I – Books By and About Women; Part II – English Country Houses; and Part III – Perspective. Parts II and III are clearly niche fields of collecting, while Part I will appeal to a broader audience.

Item 12 is a collection of works assembled for the Congress of Women held at the World's Columbian Exposition in Chicago in 1893. The compiler, Mary Kavanaugh Oldham Eagle was, like Hillary Clinton, a first lady...of Arkansas. Her husband had been elected under controversial circumstances, but this doesn't matter here. Mrs. Eagle put together this work of 220 papers by 180 women, covering topics such as "Complete Freedom for Women", "Economic Independence of Women", "Our Forgotten Foremothers", and "Changing Ideals in Southern Womanhood". Priced at $300.

Item 36 is the catalogue for the Portland Museum collection which had been owned by the Duchess Dowager of Portland. This auction began on April 24, 1786, and continued for 37 days. In all, 4,156 lots were offered for sale. It covered everything from furniture and coins and books to insect and birds’ eggs collections. The most noted item was the "Portland Vase", which sold for the then astonishing price of £1,029. Bound with this copy is a list of prices realized. $2,250.

Item 24 is Elizabeth B. Johnson's 1889 (sixteenth) edition of the Visitor’s Guide to Mount Vernon. This is a thorough guidebook to this historic site from a time closer to Washington's life than it is to today. Charles Wood notes that 19th century American guidebooks are rare books to find today. $100.

For collectors of Vermont as well as books by women is Abby Maria Hemenway's Poets and Poetry of Vermont. Published in Rutland in 1858, this decorative book on Vermont poets includes an inscription from the author. Item 21. $500. And while we're focused on poetry, here's The Poems of Maria Lowell, by, naturally, Maria Lowell. She was half of the poetic Lowells, her husband being James Russell Lowell, a well-regarded poet in his day who has not been as well remembered as contemporaries such as Longfellow and Whittier. While this 1855 book of Maria Lowell's poems was limited to 50 copies, not exactly an endorsement, it was later reprinted in 1907 and again in 1936 in larger editions. Item 29. $1,000.