Fine Books and Manuscripts from The 19th Century Shop 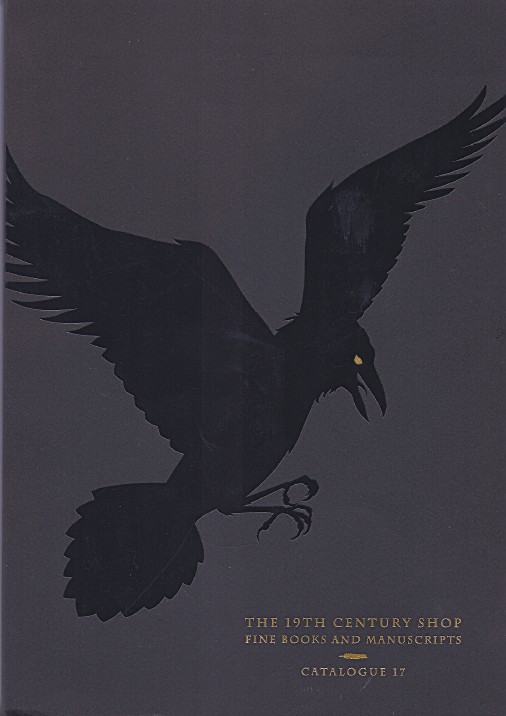 A raven and more from The 19th Century Shop.

The 19th Century Shop has issued its Catalogue 17 of fine books and manuscripts. This is not a subject specific catalogue, but rather fine and important items covering a variety of fields. Perhaps the image of a raven on the cover is a perfect symbol, as you can find both literature and science, poetry and zoology, along with much else between its covers. These are just a few of the items available in this collection.

The aforementioned raven would make Edgar Allan Poe's career in 1845, but in 1839 he was still a struggling writer living in virtual poverty. However, he did have a sense of marketing. The publishing of The Fall of the House of Usher the previous year had provided him some recognition. One who appreciated that work was the already renown American writer Washington Irving, who wrote a positive review. So, the savvy Poe, now ready to publish Tales of the Grotesque and Arabesque, whipped off this letter to Irving requesting another. "I am deliberately convinced," writes Poe, "that your good opinion, thus permitted to be expressed, would ensure me that public attention which would carry me on to fortune hereafter, by ensuring me fame at once." Poe goes on to note that such an endorsement, "an act of little moment in respect to yourself - will be life itself to me." Poe could pour it on thickly, but he did get some kind words from Irving. Poe's letter (item 172) is priced at $60,000.

Here is another item that ties together two great American writers. It is Henry Wadsworth Longfellow's signed (by Longfellow in 1851) personal copy of Nathaniel Hawthorne's Twice-Told Tales (also dated 1851). Longfellow was a great supporter of Hawthorne, having provided this book with a good review when it was first published in 1837. His enthusiastic review did much to start Hawthorne's successful career. Item 103. $5,500.

We will mention one more item tying together two writers, though they do not need our help tying themselves together. They managed that quite nicely themselves. Item 20 is inscribed copies of the first books of Robert and Elizabeth Browning. From Robert there is Pauline; A Fragment of a Confession, published in 1833. It was inscribed in 1875 by Browning to his friend George Lillie Craik with some kind words. From Elizabeth, we have The Battle of Marathon. A Poem by E.B. Barrett, published in 1820. The then Miss Barrett was only 13 years old, and inscribed the book "for her dearest Grandmama." Included with the books is a three-page letter from Robert to Sir Frederic Leighton in 1861, commenting on the death of Elizabeth. He notes that it is comforting to him that "the knowledge of separation from us was spared her." Item 20. Price on request.

From the Brownings' firsts we go to Doyle's last. Of course, Sir Arthur Conan Doyle is known for his detective mysteries featuring Sherlock Holmes. However, Doyle was interested in mysteries greater than even Holmes could solve. He was a spiritualist, and an absolutely convinced believer in spirits and the other world. Doyle lost his wife, son, brother, and various other family members. Belief in an other world was of great comfort to him, and the older he became, the greater was his certainty in it. Item 66 is the first American edition of Doyle's last book, The Edge of the Unknown, published in 1930, the year he died. $250.

Item 46 is a major paper in the history of the theory of evolution, On the Tendency of Species to Form Varieties, and on the Perpetuation of Varieties and Species by Natural Means of Selection, published in the Journal of the Proceedings of the Linnean Society in 1859 (prior to Darwin's Origin of Species). It was the joint work of Charles Darwin and Alfred Russell Wallace. Wallace had come up with a very similar evolutionary theory independent of Darwin, and the two had begun corresponding in 1855. Darwin was in something of a conundrum as Wallace was ready to publish his theory. Darwin had come to his conclusions quite a bit earlier, as early as 1844, but had only shared them among a few friends, rather than publishing them. Now, a rush to publish would be unseemly, so he agreed to a joint publication with Wallace, who was apparently satisfied with the arrangement as Darwin had the much greater reputation. Wallace would go on to be a great defender of Darwin, though his contributions have been to a great extent overlooked. $4,500.

You will find many of the 19th Century Shop's books listed in "Books For Sale" on this site. Click here.