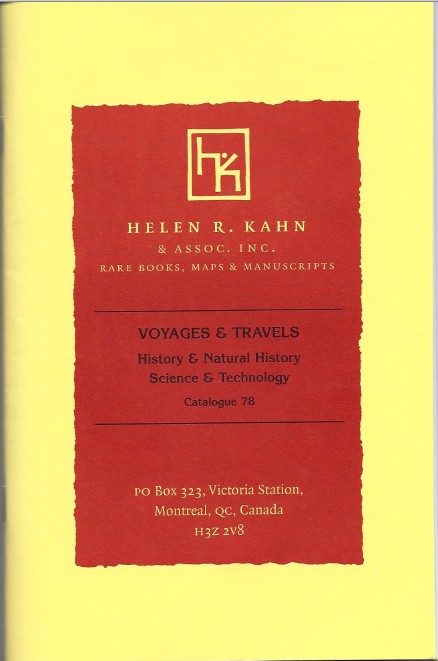 All types of explorations are found in Helen Kahn's latest catalogue.

Helen R. Kahn and Associates has released their 78th catalogue, Voyages & Travels, History & Natural History, Science & Technology. This is a catalogue filled with books about explorations, be they geographical, scientific or other, mostly antiquarian, though some being of a more recent vintage. The areas visited are as large as the world, and the languages employed varied, including English, French, Latin, German, and others of European origin. Now, we will look at a few of the books offered.

We start with what is described as an "exceptionally fine" copy of the account of one of the most exciting, and ultimately mysterious of voyages. Shortly after the time of Cook, the French navigator Jean-Francois de la Perouse set out on one the longest of travels. He left France in 1785 with two ships, on a mission to survey the various lands of the Pacific and to find a Northwest Passage from the west. He would travel to the Northwest coast of America, unsuccessfully seek the Northwest Passage from Alaska, come back to Hawaii, then to China, the Philippines, Korea, Japan, and western Russia. From there, he sent his journals back home over land. Then it was on to the Samoan Islands and Australia, where he put in to Botany Bay on January 25, 1788. He sent his most recent notes back home again and headed east. He was never heard from again. Despite missions sent to locate him, the fate of La Perouse and his men remained a mystery for 40 years. Finally, another explorer found remains of his ships that had been wrecked in the reefs off of Vanikoro. Fortunately, we have an account of all but his last days as La Perouse sent his journals back home ahead of him. Item 45 is a first edition of the Voyage de La Perouse Autour du Monde... a four-volume large paper first edition with the atlas, published in 1797. Priced at $35,000.

Pierre-Francois Charlevoix was another French explorer, though his primary occupation was that of a Jesuit missionary. Charlevoix came to New France (now known as the United States and Canada) in 1705 and again in 1720. He would travel around the Great Lakes region and the Mississippi River, all the time observing and taking down accounts of the Indian tribes he met and settlements he visited. He also attempted to learn from them whether there was a route to the Pacific, though that would have to wait until the end of the century and Mackenzie's journey across Canada. Item 15 is a 1744 first edition of the three-volume Histoire et Description Generale de la Nouvelle France... by Charlevoix. $17,500.

Not all adventures are terribly pleasant, as Robert Adams can attest. Adams was a sailor from Hudson, New York, who sailed out of Gibralter on the not-so good ship Charles in 1810. It was washed ashore by dangerous currents along the coast of North Africa. The captain was killed while the crew was made slaves. Adams was taken eastward and passed along to various masters. At one point, he became only the second or third westerner to visit the mysterious city of Timbuctoo. Eventually, he was ransomed by a British consul in Morocco, and returned to London where he wrote this book: The Narrative of Robert Adams, A Sailor, who was wrecked on the western coast of Africa, in the year 1810, was detained three years in slavery by Arabs of the Great Desert... published in 1816. Item 1. $1,700.

Item 42 is Alaska and the Polar Regions. Lecture of Gen. Thomas L. Kane before the American Geographical Society...May 7, 1868. Kane was a remarkable man, and this interest in the newly purchased territory of Alaska is just a sidelight to his career. It was likely spurred on by the career of his brother, Elisha Kane, who served on two of the unsuccessful expeditions attempting to find the lost Arctic explorer John Franklin. Kane was an active abolitionist who rose to the rank of General during the Civil War. He suffered several battlefield wounds and illnesses that finally forced him from active duty after Gettysburg. However, where Kane is best remembered is Utah, as he was probably the greatest outsider friend ever of the Mormons. He frequently defended them against a hostile government, assisted in their migration west, helped form the Mormon battalion during the Mexican War, worked to defuse tensions during the Utah War between the government and Mormon settlers, and served as a personal attorney and good friend of Brigham Young. $400.