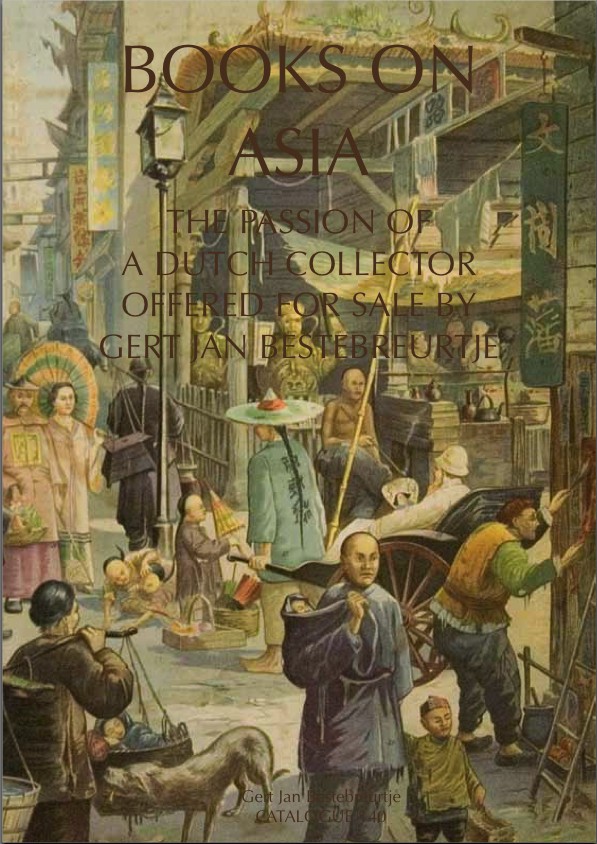 Gert Jan Bestebreurtje Rare Books of the Netherlands has issued a new catalogue, Books on Asia. The Passion of a Dutch Collector. This is an extensive catalogue, over 800 items, with particular focuses on China, Japan, and Indonesia. While many books are in the Dutch language, there are also a great number in English and other languages. Much of the material relates to the opening of Asian countries to European visitation and trade. For those collecting early European-Asian works, this is a catalogue worth reading. Now, here are a few samples of books being offered.

Item 247 is a first Dutch edition of a book that is both historically important and filled with claims that are almost certainly untrue. The writer/adventurer was the Portuguese explorer Fernao Mendes Pinto. He visited various points in Asia in the mid-16th century. What seems clear is that he was one of the first if not the first European to enter Japan. He had already experienced some wild (if true) adventures in China, having been held captive and forced to labor for a year building the Great Wall. He eventually was freed by invading Tatars and hooked up with a pirate ship that sunk off of Japan, leading to his entry. Pinto's adventures also took him to India several times, and later a return voyage to Japan, where he claimed to have been the first person to show the Japanese a gun. Pinto's tale was not published until 1614 (this first Dutch is dated 1652), thirty years after his death, from manuscripts left behind. It earned him the sobriquet "Prince of Lies," but while his stories are often filled with exaggeration if not downright fabrication, it does provide one of the earliest looks at the culture and customs of the many places he visited. The title, in Dutch, is Wonderlyke reizen van Fernando Mendez Pinto... Priced at €950 (Euros, or approximately $1,320 in U.S. dollars).

Item 815 is the story of a terrible disaster, though this one has its doubters too. Author Frans van der Heyden was a crewman on the Schelling, which wrecked on an offshore sandbar. Some crewmen were able to build a raft and make it to an uninhabited island. There, they fought starvation and cannibalism, before finally making it to the Bengal coast in the midst of a war. Here they were conscripted to fight an invading army of cannibals. Not much is known about van der Heyden, and Bestebreurtje notes that these adventures seem too unrealistic to believe, and the description of the places seen so general that they could be just about anywhere. The title of the book is Vervare schip-breuk van't Oost-Indisch jacht ter Schilling... and this is a second and best Dutch edition, published in 1675. €1,850 (US $2,572).

Here is a tale whose authenticity is not in dispute. It was long ago admitted to being a fake. It is An historical and geographical description of Formosa... by George Psalmanaazaar. Psalmanaazaar was supposedly a native of this imaginary island (not to be confused with Taiwan), a convert to Christianity in a land that featured, among other things, massive human sacrifices. In reality, he was a Frenchman who made it all up, but he had many in England convinced of the story for a long time. Eventually, inconsistencies caught up with him and Psalmanaazaar admitted to the fraud. Item 255 is a first edition, published in 1704. €1,500 (US $2,085).