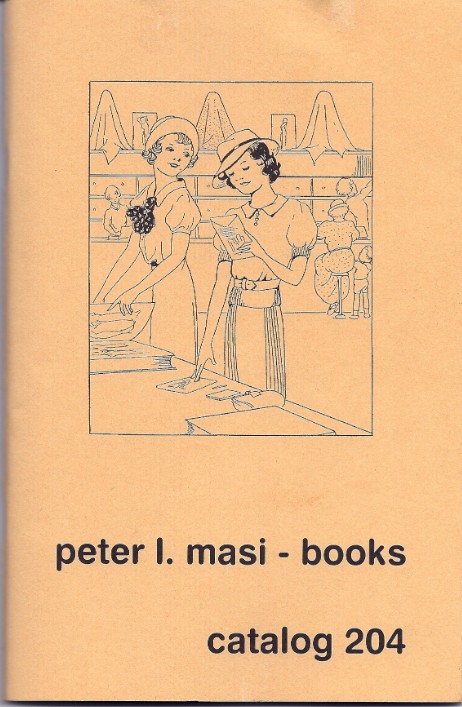 Peter Masi Books has published Catalog 204 of uncommon and obscure items with easy to afford prices. Masi specializes in pamphlets and promotionals from various organizations, obscure ephemeral works you probably never would find if you went looking for them. He has neatly organized them by subject, some of which are agriculture, art, astronomy, automotive, computers, cooking, etiquette, medicine, natural science, paleontology, religion, sex, and women. There are lots of others too. There are many listed by state, particularly those of the Northeast (Masi is located in Massachusetts). We will take a look at a few of these uncommon items.

The name "Francis Parkman" is generally associated with adventure and American historical writing, and in particular with an account of travel on the Oregon Trail. One would not expect to see the name on such a tenderhearted book as An Offering of Sympathy to the Afflicted, Especially to Parents of Bereaved Children... Nevertheless, here it is. There's an explanation. "Francis Parkman" was also the name of the famous historian's father, a clergyman from Boston. He was the writer of this book, originally published in 1930 when the better known Parkman was seven. Item 291 is a second edition from 1833. Priced at $15.

Are you sick of all the politics and constant electioneering, where the defeated candidates immediately begin attacking the victors and start campaigning for the next election the very next day? Why can't candidates work together for the good of the country, like they used to? Wait a minute. What is this? Item 15 is The Degradation of Our Representative System and Its Reform, by J. Francis Fisher, published way back in 1863. Writes Fisher, "Hardly is one election closed, before plans are laid for another. The defeated party at once begins the assaults upon the newly elected member, & both prepare with increased animosity for a new contest." Turns out politicians have always been politicians. $25.

Item 259 is a menu for a 1935 Testimonial Banquet Tendered to Rev. A. Santolini at Rossini's Restaurant in Savin Rock (Connecticut). The menu was printed by Maturo Bros., the toastmaster was a Mr. Di Cenzo, and speakers included the names De Cicco, Caviglio, and Sartori. The meal consisted of antipasto, minestrone, mezzo pollo, insalata, and gelati. I'm going to go out on a limb here and say this probably took place in an Italian neighborhood. $10.

Item 510 is a helpful exposition, Beyond Birth Control: The Christian Experience of Sex. This 1968 book was written by Sidney Cornelia Callahan. The mother of six covers such topics as celibacy, control, and family planning. $10.

Item 379 represents one half of a medical debate: An Open Letter to Eugene Grissom, M.D., LL.D., &c, Superintendent of the Asylum for the Insane at Raleigh, North Carolina, by William A. Hammond, M.D. Seems Dr. Hammond, a former U.S. Surgeon General, was displeased with Dr. Grissom's opposition to the use of mechanical restraints in insane asylums. According to Masi, Hammond responds by "thoroughly trouncing his critic's qualifications & suggesting he was better suited as an inmate than superintendent." Published in 1878. $25.

Item 317 is a happy piece put out by the American Tract Society circa 1840 for children. The title is The Uncertainty of Life, and the Certainty of Death. Page 1 is an image of a deathbed with a minister and weeping woman. This is the kind of book children had to read in the days before Dr. Seuss. $8.

No need to describe item 462 in any detail as the title says it all: A Revision of the Ordovician Bryozoan Genera Batostoma, Anaphragma, & Amplexopora. Richard Boardman's 1960 pamphlet was published by the Smithsonian. Your tax dollars at work. Actually, I sort of understand what this book is about, having taken a course in geology long ago. $10.

For those who can remember all the way back to when cars were as unimaginative as they are today, item 142 is Ford Motor Cars, a catalogue of the company's 1913 models. Those models consisted of versions of the Model T. There was no need for color in this brochure. $75.