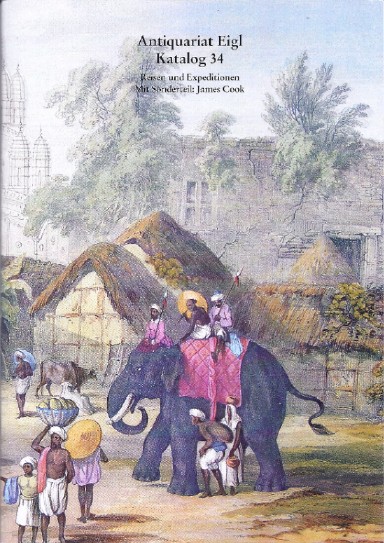 Antiquariat Ralf Eigl has published their Katalog 34 with the title Reisen und Expeditionen Mit Sonderteil: James Cook. Two things evident about this catalogue from the title is that it is primarily in German, and that it is about travels and expeditions, with a section devoted to the English explorer James Cook. Circumstances, more specifically, this writer's unfamiliarity with the German language, will mostly limit our focus to those books that are in other languages and are so described. There are several books in English, along with a few in French and Spanish. Most books, however, are in German, so those who understand and collect in this language may want to contact the bookseller for a copy. Our look at the non-German titles should, at least, give an idea of what type of material is to be found inside.

Captain James Cook is recognized as likely the greatest 18th century explorer. He traveled from England to the Pacific three times from 1768-1779. While all of his voyages were important, it is probably the second that was the most important of all. It laid to rest a fundamental misconception concerning the southern part of the world. The widely held belief was that there was a massive southern continent, far bigger than the Antarctica we know today. Cook ventured far south, farther than anyone before him, until blocked by ice. Still, he found no continent, though he was well into the latitudes where one was presumed to exist. The second voyage also took Cook to the South Pacific, where he met and took back home the young native man Omai, who became the rage of London. Item 2 is Cook's official account of his second voyage, A voyage towards the South Pole, and around the World, published in 1777. Priced at €14,000 (euros, or approximately $19,030 US dollars).

The third voyage was Cook's longest trip, and ultimately it proved fatal for the great navigator. One of its major aims was to find a Northwest Passage from the Pacific side. Most explorers had tried to find this northern passage from the Atlantic side, without success. Cook discovered the Hawaiian Islands on his trip towards the Northwest, and after an unsuccessful attempt to find a passage, he returned. Though warmly received the first time, something went terribly wrong. Cook and his men became involved in a dispute with the natives and Cook was killed. Various accounts of his death were written, but many believe that surgeon David Samwell's was the most complete and accurate version of what happened. Samwell wrote a book about the journey, and a year later, in the New Annual Register for 1786, his specific account of Cook's death was published. This edition of the Register is item 12. €1,700 (US $2,310).

Samwell also wrote about native languages in this article, On the Language of the South Seas, published in Gentleman's Magazine in 1789. In these pre-evolution days, many people believed that these far flung peoples must be remnants of the Lost Tribes of Israel. To establish this theory, they would look for similarities in language with ancient Hebrew. Samwell knocks this theory down in his article, saying, "I am fully persuaded, that an accurate comparison of the South-Sea vocabulary with the Hebrew will shew that two languages, so totally dissimilar in sound, can never be traced to the same origin." €320 (US $435).

Item 18 is in German, but it is a book even English collectors will recognize. It is the account of Cook's third voyage by the German seaman Heinrich Zimmermann, Heinrich Zimmermanns von Wiszloch in der Pfalz, Reise um die Welt, mit Capitain Cook. Zimmermann was an ordinary sailor, living on the lower deck, but he kept a diary of his journey with Cook on the Discovery. He provides a different outlook from those of the officers who published. Zimmermann jumped the gun with his account, publishing several years before the official version, in violation of the British Admiralty's rules. That mattered not to Zimmermann, now outside their reach. The first edition, which was in German, was published in 1781. Offered is the second German edition, published in 1783, identical to the first, but, Antiquariat Eigl points out, even rarer than the first. €29,000 (US $39,420).

You will find many of Antiquariat Ralf Eigl's books listed in "Books For Sale" on this site. Click here.