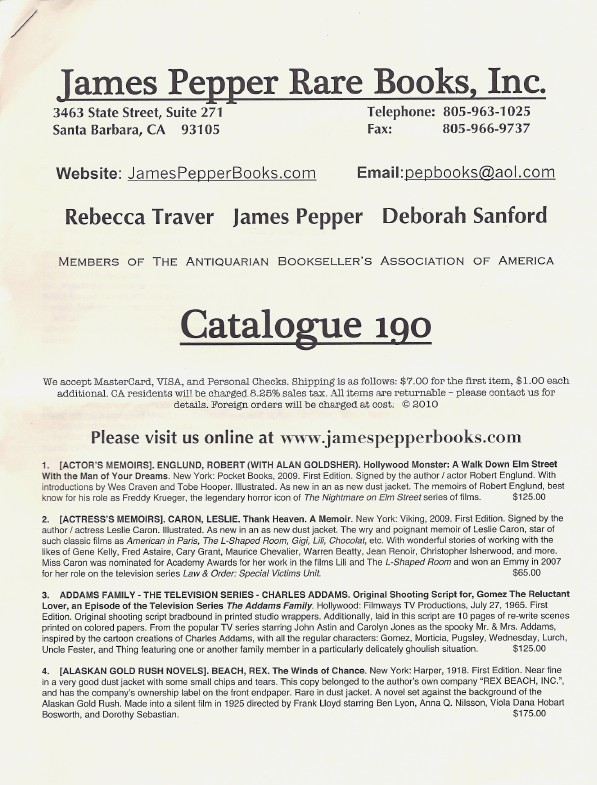 James Pepper Rare Books has reached Catalogue 190 in their series, with the focus, as always, on material related to film, literature and mystery. Many of the items are signed or inscribed, and the catalogue is filled with names you recognize. The dates for these items mostly range from the era of silent movies to the year just completed. Here are a few samples.

Fans of science fiction/fantasy writer Ray Bradbury will be most interested in this issue of Imagination! The Fanmag of the Future With a Future! (actually, it didn't have a much of a future). Imagination! was published by the Los Angeles' Science Fiction Society in 1938, edited by the legendary promoter of the science fiction genre Forrest J. Ackerman. This otherwise forgotten "fanmag" is noted for publishing the first work of the noted fantasy writer Ray Bradbury. That was in the January issue, Bradbury being all of 17 years old at the time. Item 13 is a copy of the September issue, and the now more mature (18) Ray Bradbury, writing under the thinly disguised penname "Oswald Bradbury," contributes his piece Mathematica Menace. As with his earlier work, Bradbury was paid nothing for his efforts, but he must have impressed Ackerman enough that the latter funded Bradbury's own "fanmag" published the following year. Priced at $650.

Item 136 is a murder mystery, but not a fictional one. It is an autobiographical account of the famous Sam Sheppard murder trial and its aftermath. Sheppard was a Cleveland physician accused of murdering his wife in 1954. He was a logical suspect as he was carrying on an affair with his nurse. However, there were also numerous holes in the case. That didn't much matter as the trial went on in a carnival-like atmosphere, grabbing headlines like the later O.J. trial, only with a different outcome for the defendant. Local newspapers convicted him before trial, and the names of prospective jurors were publicly announced, assuring all would hear from the public in advance. One reporter quoted the trial judge as saying, "It's an open and shut case . . . He is guilty as hell." Sheppard was convicted and spent the following 12 years in jail before securing a retrial by order of the U.S. Supreme Court. A verdict of not-guilty was rendered in his second trial. Sheppard's post-prison years were rocky, and he died only four years later, an alcoholic, suffering from liver failure. Dr. Sam's book, published after his conviction was overturned in 1966, is entitled Endure and Conquer. My Twelve-Year Fight for Vindication. $300.

Some books are informative, teaching us something we did not know. For example, did you know that Satan Was a Lesbian? That's the title of this 1966 literary classic, which is attributed to Fred Haley on the cover but Monica Roberts on the title page. We will assume that at least one (if not both) of these names is a pseudonym, though we are not sure which. It really doesn't matter. It's not like we're talking about Samuel Clemens/Mark Twain here. This book is noted more for its cover art than its writing anyway. A horned, red Satan looks down with an evil smile at a less than feminine looking woman who wields a whip at a defensive male in a business suit, while a scantily dressed more feminine looking blonde looks on. Pepper notes that this type of lesbian pulp fiction was actually aimed more at a male audience. Item 69. $300.

Walter Annenberg was a very successful newspaper and magazine publisher of the second half of the 20th century. It provided him with great wealth, particularly as he cashed out in the 1980s. Along the way, he made many influential friends, including presidents and other notable people, such as film director George Cukor. Annenberg had seen a clever quote Cukor had made, "I seem to be a friend of every dead person in the world." He whipped off this letter to Cukor on February 12, 1968, reassuring him, "I heartily add that there are many live people who admire George Cukor enormously. You may safely deduce that I am in the forefront of such a group..." This letter is item 6. $150.