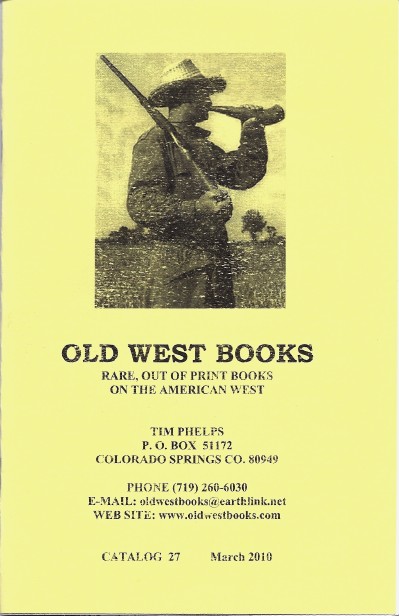 A look at the Old West.

Old West Books has issued a new catalogue of Rare, Out of Print Books on the American West. This one is broken into six subjects, Custer, Buffalo, Charles A. Siringo, Wyoming, Lewis and Clark, and A Little of Everything. Those are self-explanatory, except... Charles A. Siringo? I had to look him up. Siringo was a Texan with two careers, cowboy and detective. He was also a writer, authoring several books about both careers. His writing about the second career would ultimately get him in trouble with his former employer, Pinkertons, about whom he wrote something of an expose. This catalogue also contains a surprising number of books about that most American of animals, the western buffalo (yes, I know they are actually bison). There is much here accounting how these beasts went from enormous numbers in huge herds throughout the west to near extinction in barely a decade. Here are some of these classic books about the Old West.

In the days after the Civil War, when the buffalo were still plentiful, one of the great pastimes for wealthy easterners was the buffalo hunt. Perhaps none were more spectacular than those hosted by Civil War General Philip Sheridan in 1871. In September of that year, Sheridan arranged an expedition to Nebraska with a dozen wealthy easterners, including Wall Street giants Lawrence and Leonard Jerome (the latter was Winston Churchill's grandfather, but not yet). Buffalo Bill, still a relatively obscure guide, came along to lead the hunt and tell stories in the evening. He helped hone the skills that would make him such a celebrity on these jaunts. These trips required a certain degree of outdoor skill as riding, hunting, and camping were required, though they could hardly be considered "roughing it" by the day's standards. They rode luxury railroad cars to the plains, and were served gourmet meals on fine china, with the best wine and cigars, while out in the wilds. In the day, they shot buffalo and other animals, 600 of the large beasts along with hundreds of elk and turkeys. They rode 200 miles in 10 days before returning to the railway cars. Item 34 is Henry A. Davies' rare 1872 first edition account, Ten Days on the Plains. Priced at $5,500. In December of that year, Sheridan and Bill would lead an even more spectacular buffalo hunting expedition, taking Grand Duke Alexei of Russia, an ally America wanted to impress, on a similar adventure.

The extent of the buffalo slaughter is revealed in this look back by Major Israel McCreight at a sideline business: Buffalo Bone Days. A Story of the Buffalo Slaughter on Our Western Plains. McCreight was a dealer in buffalo bones. Slaughter was so extensive that there was a business in gathering the bones of the dead animals and shipping them east by railcar. The bones were used for making fertilizer. McCreight, who operated out of the Dakota Territory, reports that one hunter killed 1,500 buffalo in 7 days, another 120 in 40 minutes. It's no wonder that what was considered a great sport in the 1870s was wiped out by the 1880s, the buffalo practically made extinct in just a few years time. McCreight had to move on to other jobs, but he wrote about his early career in 1939, and then published this expanded edition in 1950. This copy is signed by the author. Item 39. $675.