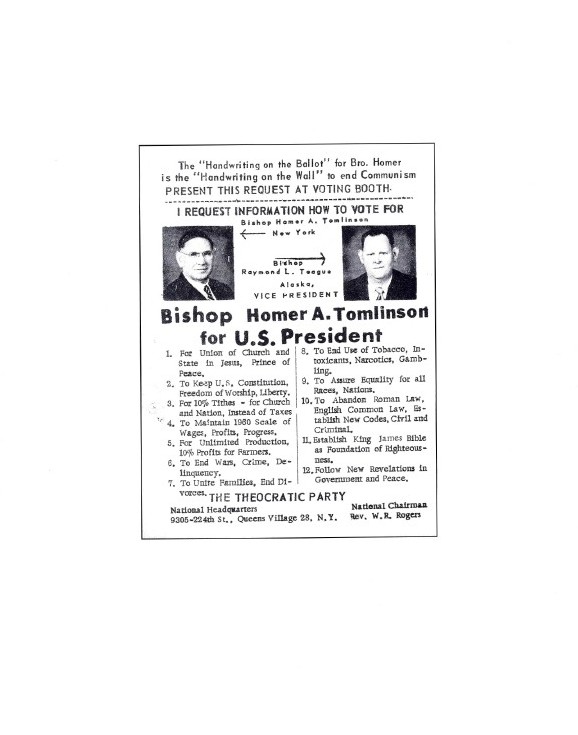 Garrett Scott, Bookseller, has issued his 26th catalogue of American Books and Pamphlets. Here you will find the odd and the obscure, or as often the case, works that qualify as both. Not everything Scott offers is strange. There are serious and intelligent works, such as Missouri Senator Thomas Hart Benton's 1850 call for no more compromises with slavery as the nation, unwisely, backed into the Compromise of 1850, further fueling regional discord rather than resolving it. Nevertheless, in selecting items from the almost 400 offered to describe, it's hard to avoid the stranger and more entertaining of works from American authors of the 19th and 20th centuries. Not even the greatest humorists are quite as entertaining as those who are unintentionally so.

One of the bitterest political rivalries took place in Vermont in the mid-1840s when Governor William Slade challenged Senator Samuel Phelps for the Whig Party nomination for senator. There ensued a vitriolic pamphlet campaign, embarrassingly preserved in Scott's collection. In item 261, Phelps responds to charges by Slade in To the People of Vermont. Mr. Phelps' Rejoinder to Mr. Slade's "Reply," published in 1846. Describing his opponent, Phelps writes, "Naturally selfish, ambitious, cold-hearted, hypocritical, and revengeful, he has well cultivated these qualities through a life of political controversy and political intrigue." He further accuses Slade of "mixing in every paltry quarrel to gratify his groveling love of distinction, and, at the same time, abjectly soliciting office for bread." Priced at $100. In item 262, Gov. Slade's Reply to Senator Phelps' Appeal (1846), Slade writes, "...as to the causes of Mr. Phelps' conduct, I have only to say, that they are to be found in his excessive jealousy and violence of feelings - not arising from his use of intoxicating liquors, though much aggravated by it. He was, manifestly, under the influence of liquor during the evening of the passage of the tariff." $100.

Ohio evangelist Alexander Hall had some dire warnings for followers of the Universalist faith in 1846, expressed in Universalism Against Itself... Preaches Hall, "And how little do the advocates of orthodoxy comprehend the idea conveyed by that word endless! - e-n-d-l-e-s-s t-o-r-m-e-n-t!!! Think, O think my audience, before you subscribe to such a soul-benumbing, heart-withering, and God-dishonoring sentiment." Item 318. $85.

That poster on the cover of this catalogue (click thumbnail above) recalls the election of 1960, which pitted John Kennedy against Richard Nixon and Homer Tomlinson. Homer Tomlinson? He was the nominee of the Theocratic Party, which promised to do away with separation of church and state, replace income taxes with 10% tithes (is this a forerunner of the flat tax?), end war, crime, delinquency, Communism, use of tobacco, intoxicants, narcotics and gambling. Unfortunately, Tomlinson lost the election, so all of these evils still exist. Tomlinson chose fellow Bishop in his Church of God Raymond L. Teague, an eccentric Alaskan, as his running mate. This man truly was ahead of his time. Item 88. $50.