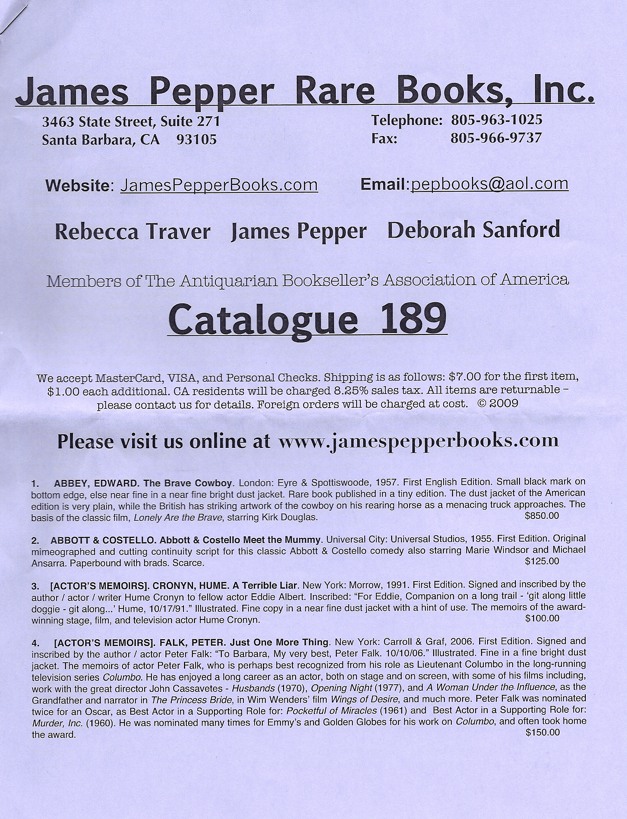 James Pepper Rare Books has issued Catalogue 189 in their ongoing series. Their specialties are books related to film and the theater, mystery and detective books, and literature. There are usually a few other items from unrelated fields thrown in for good measure. Here are a few of the items in this latest catalogue.

Item 36 is a most interesting letter by Richard Henry Dana, Jr., concerning Charles Dickens' first visit to America. Dana was himself a writer, author of Two Years Before the Mast, an account of his experiences as an ordinary sailor plus his visits to various places in California before the Gold Rush. He also wrote The Seaman's Friend, a guide to the rights and responsibilities of sailors. Dana's experience as a common sailor would lead him to be acutely aware of issues involving their mistreatment. His concern for the rights of the downtrodden would also make Dana a keen abolitionist. In 1842, Dickens made his first trip to America, and according to Dana's letter, he was a great sensation. On January 31, 1842, Dana wrote his English publisher, Edward Moxon, this letter. Writes Dana from Boston, "We have Dickens here with us, & the whole town is crazy. I doubt if a literary man ever made such a 'progress' through a country as he is making through ours." Dana goes on to write about people lining up to see the beleaguered Dickens, and how even men of literature and wealth are "paying him every attention & like him exceedingly." Dana, not surprisingly, notes that he, too, liked Dickens very much. Priced at $18,500.

Item 120 is A Daughter of the Sioux. A Tale of the Indian Frontier. It was written by General Charles King and illustrated by famed western artist Frederic Remington and Edwin W. Deming. General King's military career primarily involved the post-Civil War era Indian wars, which led him to write many books about the West as well as scripts for a few of Buffalo Bill's silent films. This copy of King's book is a presentation copy by illustrator Remington to John Wallace "Captain Jack" Crawford, a western character himself. Crawford was a writer and poet who started as a coal miner, became a Union soldier during the Civil War, and later served as a scout during the Indian wars, including those with the Sioux. He, too, was a friend of Buffalo Bill Cody and, Pepper notes, dressed in similar outfits. $4,500.

Item 107 is the 1949 travel diary of Abby Perelman, daughter of noted American writer and humorist S.J. Perelman. Abby was ten years old when the family began a long, worldwide trip. She provides daily entries of their experiences. It includes notes from the three most famous Marx Brothers. A comment from Groucho, evidently penned just before they embarked from Los Angeles, reads, "Since you're a female, my love to you Abby." From London, Harpo and Chico have added notes. S.J. Perelman would later write about the trip in his book The Swiss Family Perelman. $1,500.

Here is a pricing guide for your old books, but you may want to make some adjustments before you sell them at these prices. Item 46 is American Books and Their Prices, by William Targ. The catch is that these two volumes were published in 1941 and 1942. Pepper notes that these books were a "landmark price guide to book prices" at the time. Pepper points out you could find Moby Dick for as low as $125 (auction prices for 2009 varied from $6,100 to $30,500). The Americana Exchange's pricing index indicates typical books have increased about 50 times in value since this guide was published, though the ratio is even higher for the more collectible books. Offered is a limited (500 copies) first edition of the guide with the second volume signed by Targ. $125.

Item 75 is a 1945 second printing of Mr. Limpet by Theodore Pratt. It is the story of a man who becomes a fish and uses his sonar capacities to disrupt the enemy's navy, helping the Allies win the war. This is a particularly collectible copy as it is signed by actor and comedian Don Knotts. Knotts portrayed Mr. Limpet in the 1964 film version of the book, The Incredible Mr. Limpet, which combined cartoon animation with human performances. $275.