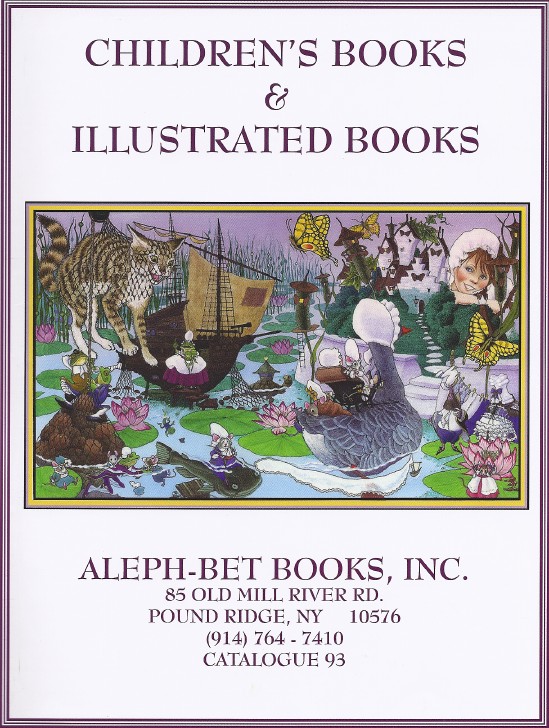 Aleph-Bet Books recently issued their Catalogue 93 of Children's Books and Illustrated Books. Those familiar with Aleph-Bet's catalogues will recognize it instantly. As always, there are 600 items, each well described, with an accompanying color photograph. It is filled with the books of your childhood, and those of your ancestors, back perhaps six or seven generations. Children's books provide a wonderful look at their eras, combining fantasy with the morals, values, and prejudices each generation wanted to instill within its children. Sometimes the messages are subtle, other times blatant (such as a Dr. Seuss creature encouraging parents to buy war bonds). Whichever, these books tell us as much about the real world of their times as they do about the imaginary ones they often describe. Here are a few of them.

No book has come to symbolize the prejudices of another era as much as this book, though it is hardly one of the greatest offenders. Item 81 is an 1899 first edition of Little Black Sambo, by Helen Bannerman. It is the story of a little boy, from India, not Africa, who eventually outwits some tigers who steal his clothes. The story itself is inoffensive, and if Bannerman had not used the word "black" to describe the character, it might well still be a popular and uncontroversial tale. However, particularly as later editions used increasingly stereotypical and offensive illustrations, "Sambo" became a degrading term. It's all terribly unfortunate. The era was filled with children's books far more offensive, including countless versions of the "Ten Little N.....s." Priced at $12,500.

The English world had its stereotypical views of foreigners a century ago too. Item 308 is My Very First Little Book of Other Countries, featuring the illustrations of John Hassall, published in 1910. For example, in the brief description of Turkey, it says, "They take things easy there - a Turk is never very fond of work." $150.

In the 18th century, children's writers were still focused on the more basic of lessons to teach their young. Item 237 is The School of Good Manners, an 1808 Boston edition of a book originally published in England in 1754. It teaches children important lessons, such as "Spit not in the room, but in the fireplace," and "If thou wantest any thing from the servants call to them softly." Yes, I must remember to treat my servants more politely. $1,200.

Some "children's" books are really meant for adults. Item 27 is an alphabet book entitled Little Book of Bores, by Oliver Herford, published in 1906. For example, "T is the Terrible Tot / Who says things he'd much better not / A thing of that age / Should be kept in a cage / And fed (if at all) through a slot." I don't think this was really meant for children. $150.

Item 193 is the first English language edition of a tale that became a children's favorite: Story of a Puppet, or the Adventures of Pinocchio. The story had first been published serially in a magazine from 1881-1883, and published in book form in Italy in 1883. However, it took almost a decade before it reached the English-speaking world with this 1892 edition. $8,000.

Here is a book I cannot see a need for: Guidebook for the Basic Primer Fun with Dick and Jane, by William and Lillian Gray, published in 1940. Was there a need for a teachers' edition of this book? Is there some deep meaning to "Run, Spot, Run" that requires a further explanation? Teachers couldn't figure this out without a cheat sheet? Item 213. $300.

You most likely think of L. Frank Baum as the writer of the Oz books, but if quantity is the prime consideration, then that title belongs to Ruth Plumly Thompson. Thompson took over for Baum after he died in 1919, and wrote more Oz books over the next two decades than Baum wrote. When she retired from the post, the next couple of books were written by John R. Neill, who had illustrated all but the first of Baum's Oz books and all of Thompson's. While the two collaborated on all of Thompson's Oz books, they worked together on only one non-Oz book, The Curious Cruise of Captain Santa, published in 1926. This was a Christmas fantasy written by Thompson and illustrated by Neill. Item 544. $800.

You will find many of Aleph-Bet's books listed in "Books For Sale" on this site. Click here.