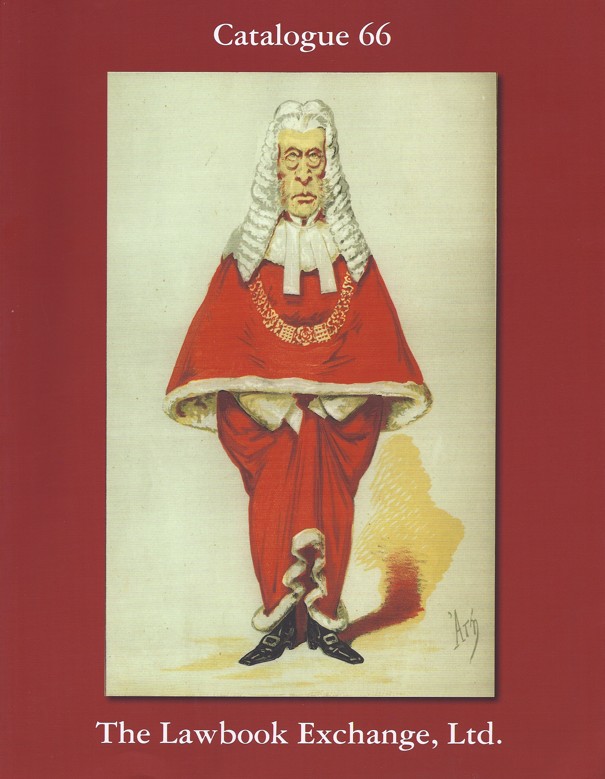 The law, in all its wisdom.

The Lawbook Exchange has issued a new catalogue for legal collectors, scholars, and others interested in the law. Most of the 200+ items offered are of a more scholarly or lawyerly interest, though there are some more sensational items too, such as accounts of murders most foul from days long ago. This is the bookseller's Catalogue 66, with the long but descriptive subtitle, Recently Acquired Books, Manuscripts and Ephemera: Featuring Rare Engravings, Scarce Nineteenth-Century Treatises And a Collection of Books From the Library of Sir Frederick Pollock. Pollock, who lived from 1845-1937, was one of the great British judges and legal scholars of his day, who wrote numerous legal treatises, and whose letters with Oliver Wendell Holmes were published posthumously in The Holmes-Pollock Letters.

Here is a quick way to catch up on the important legal works as of 1823. Item 24 is A Catalogue of Law Books, Ancient and Modern. This bibliography was published by the Associated Law Booksellers in 1823. Evidently, this was a consortium of booksellers attempting to move their wares, though it also lists many earlier, out of print works. Books were listed according to field, making it easy for the student or lawyer to find works appropriate to his needs. Priced at $750.

In 1826, Congress called for a publication of U.S. laws with respect to public lands, which covered great areas of the country at the time. This compilation was printed in 1828, and it is the first issue of Laws of the United States, Resolutions of Congress Under the Confederation, Treaties, Proclamations, Spanish Regulations, and Other Documents Respecting Public Lands. It covers eastern and midwestern states, rules for establishing territories in the West, laws involving settlers, school lands, and prints numerous Indian treaties. The Lawbook Exchange notes that the volume presents "an interesting perspective on America's westward expansion." Item 154. $200.

Item 35 is another compilation of early American laws, though this time we move all the way to the Pacific coast. It is The Statutes of California, Passed at the First Session of the Legislature. This was published in 1850 and contains the first laws of California after achieving statehood. $750.

Do you know which New Yorkers filed for bankruptcy in 1843? Here is your answer. While bankruptcy laws have been in place for over a century, there were few in place during America's first century of existence. The first such law, adopted in 1800, was repealed in 1803. Too many people, particularly those with established business interests, didn't like the idea of others being able to escape their debts. The country remained without such laws again until 1841, when the recession emanating from the Panic of 1837 led to the second bankruptcy law. This law, too, was repealed, in 1843, and it would not be until late in the century that such a set of laws would finally be established permanently. It was during this brief period that item 11 was published: An Accurate List of the Names of All Persons Who Have Been Declared Bankrupts, In the Southern District of New York, Under the Recent Bankrupt Law. This was likely published for the benefit of creditors, or perhaps to embarrass people who didn't pay their debts. $450.

Now for a little sensationalism: item 144 is The Tryal of Mary Blandy, Spinster, For the Murder of Her Father, Francis Blandy, Gent. This trial took place in County Oxford in 1752. Francis Blandy was a prosperous lawyer, Mary his well-educated daughter. Francis wanted the best in a husband for his daughter, so he promised the unheard of sum of £10,000 as a dowry. This brought all kinds of suitors out of the woodwork, but only one won her heart, Captain William Henry Cranstoun. This was most unfortunate for the Blandy family. Cranstoun, like the others, was a gold digger. Unfortunately, he was already married, and when Francis became aware of this all bets were off. So, at least according to Mary, Cranstoun provided her with a "love philter" which would make Francis like her prospective husband. The main ingredient in Cranstoun's "love philter" was arsenic. Mary gave her father the potion in his tea, he became very sick, realizing what was happening Mary attempted to destroy all of the evidence, and eventually Francis died. Cranstoun escaped to France, but Mary was arrested and tried. She argued that she was unaware of the true nature of Cranstoun's potion, but the jury did not buy her defense. As Francis died at the end of a teacup, Mary died at the end of a rope. $450.

You will find many of The Lawbook Exchange's books listed in "Books For Sale" on this site. Click here.