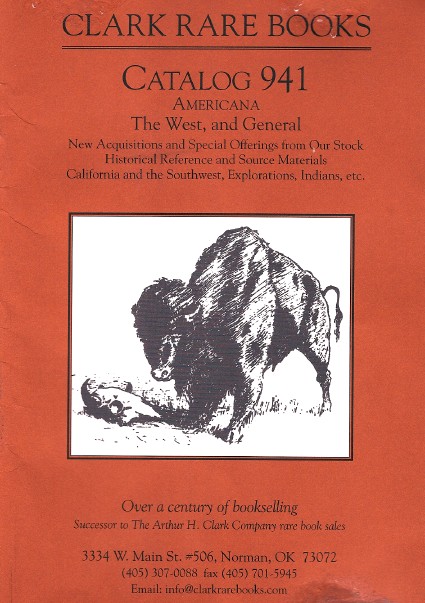 Clark Rare Books has issued their Catalog 941 of Americana, The West, and General. This catalogue includes new acquisitions along with items from stock, the great majority pertaining to the American West at a time when horses were the primary means of transportation, the army and a gun the means of defense. It includes books both collectible as well as informative, most available for prices that do not exceed double digits. There are also six new titles available from the Arthur H. Clark Company, the publisher and founder of Clark Rare Books.

Item 166 is one of those Arthur H. Clark titles, though this one was published in 1926. It is The Overland Mail, 1849-1869: Promoter of Settlement, Precursor of Railroads, by Leroy R. Hafen. This era featured the most spectacular, if not the most efficient mail service across the West. The Oregon Trail had led to settlement along the northern Pacific coast, and the Gold Rush opened California to heavy traffic in 1849. However, traversing the great divide remained a major obstacle to communication. This book covers the various mail routes opened during the period. Among the notable ones was the Butterfield Overland Mail, which took a long route along the nation's southern border. The positives included milder weather that enabled stages to run easily through winter. It took between 3 and 4 weeks to carry mail from the Midwest to the west coast, riding along on passenger stages. Three years after the Butterfield opened in 1857 came the more famous Pony Express, where fast horseback riders covered a more northern route in just 10 days. Neither of these services lasted long, shut down in 1861 by a combination of the Civil War and competition from transcontinental telegraph services. The completion of the transcontinental railroad in 1869 further diminished the need for such horse-powered mail service. Priced at $325.

Item 48 is a 1979 Arthur Clark publication, Chief Lawyer of the Nez Perce Indians, 1796-1876, by Clifford M. Drury. Chief Lawyer was not the head attorney for the Nez Perce, but a Chief of one group so named for his ability with words (being called "lawyer" at the time was more of a compliment than it is today). Most people are familiar with the great escape attempt by the Nez Perce under Chief Joseph in 1877, a 1,500-mile journey before Joseph was forced to surrender just short of the Canadian border. That escape had its roots in a treaty Lawyer had signed in 1855. The Nez Perce had been one of the most friendly of tribes to whites in the 19th century. They greeted and assisted Lewis and Clark, Lawyer being among them as a young boy at the time. Many of the tribe, including Lawyer and Joseph, welcomed missionaries and settlers, adopting the Christian religion. However, Joseph's band did not accept Lawyer's enormous act of accommodation, ceding 90% of their ancestral homeland to the government in 1855. The result was war and the great escape of 1877 when Joseph's band, which had never agreed to the treaty signed by Lawyer, refused to move to the reservation. This book takes an understanding look at Chief Lawyer's actions, controversial to this day. The copy is signed by the author. $75.

Another book of Indian history offered is Piegan: A look from within at the life, times and legacy of an American Indian Tribe. The Piegan are a tribe within the Blackfoot Nation, residing in Montana. The author, Richard Lancaster, was an adopted son of James White Calf. Some consider White Calf as the last Chief of the Piegan, though that title may belong to his father, who was the last universally recognized as Chief. James White Calf recounted the ceremonies, rituals and legends of his tribe, and it is unlikely anyone else knew them better at the time this book was published (1966). Along with being son of, if not the last Chief, White Calf was reportedly over 100 years old at the time, with four more years still to go. Item 127. $26.

For connoisseurs of fine wines, or perhaps ordinary wines, item 79 is an early Guide to California Wines. The book was written by John Melville and published in 1955. California wines did not have a particularly prestigious reputation back then, at least compared to those of France, but their popularity has soared in the half century since this guide was produced. $15.

You will find many of Clark Rare Books' books listed in "Books For Sale" on this site. Click here.