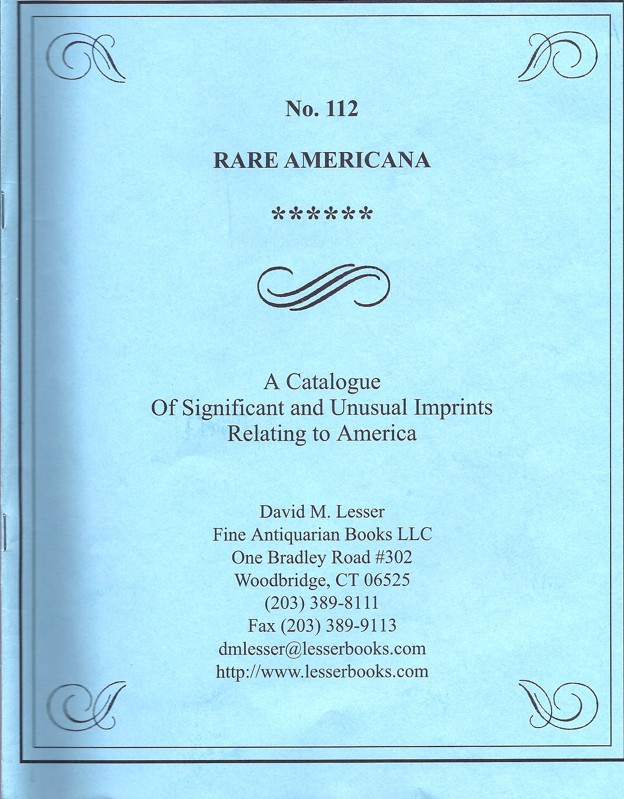 David M. Lesser Fine Antiquarian Books has issued their 112th catalogue of Rare Americana, and as expected, it is another collection of fascinating looks at American life in the 18th and 19th centuries. Most of Lesser's works are short-form, pamphlets rather than full-length books. As such, they tend to focus on immediate news and concerns of the day, as pamphlets could be written and printed up on short notice. In many cases, the topics involve the political issues of the day, and politics could be every bit as nasty back then as it is today, hard to believe as that may be. Here are some of the items from this latest Lesser catalogue.

Some political figures become so engrained in our minds as heroes that it is hard to imagine that they were seen by many of their contemporaries in a lesser light. Sam Houston is one such figure, especially in Texas, but he had his share of detractors in the Republic/Lone Star State, especially in the days leading up to the Civil War, when Houston was strongly pro-union. However, those views must have caused him controversy even earlier, as evidenced by this 1849 publication, Gen. Hunt's Letter to Senator Sam Houston. General Hunt was Memucan Hunt, Jr., a general in the Texas Army who came to Texas in 1836 with troops he had organized to fight for that state's independence. After the revolution, Houston appointed him as Texas' first Minister to the United States, and other positions later on. Evidently they had a split, as by 1849, Hunt had his share vitriolic comments to direct at Houston. He denounces Houston's "late repudiation of your old and formerly cherished principles of nullification," and condemns his "overabounding ambition, added to your jealousy and selfishness," while claiming Houston has "reviled, traduced, calumniated, or threatened, as in your judgment you thought most politic, the character of almost every man who has obtained any favorable reputation for himself." Eventually, the pro-union views Hunt alluded to in his comment about nullification would get Houston removed as Governor after Texas seceded from the Union is 1861. Item 61. Priced at $1,750.

A man who was very controversial in his day, and to some extent still is, is President Andrew Jackson. There's no question where Mary Barney stood in this debate. Item 8 is a Letter from Mary Barney, of Baltimore, to Andrew Jackson, President of the United States. This "personal" letter was published in 1830. Mary Barney was the wife of Major Barney, who Jackson declined to reappoint as naval officer for the Port of Baltimore when he became President. Jackson had stated that his "rules" prevented Barney's reappointment, those "rules" being essentially that Barney had supported John Quincy Adams in the election. Mrs. Barney writes that her husband "preferred Mr. Adams for the Presidency, because he thought him qualified and you unqualified for the station." Of course, if Mr. Barney thought Jackson unqualified for his office, it's not all that surprising that Jackson may have felt the same about Barney. $250.

Now, here's one more political attack. Item 101 is a Memoir of General Scott, from Records Contemporaneous with the Events, published in 1852. Winfield Scott served as a general and as a commander of U.S. forces longer than any other man, leading troops in every conflict from the War of 1812 to the Civil War. Scott had something of a reputation for pompousness and a healthy ego, which this piece plays upon, but he didn't command the military for so long without having more than his share of skills. The Union might well have done better in the Civil War were Scott still able to command (he was pushed aside as he was then 75 years old and no longer able to mount his horse as he weighed 300 pounds). In 1852, General Scott was nominated as the presidential candidate of the incumbent, but disintegrating Whig Party. The writer of this pamphlet, a supporter of Democratic opponent Franklin Pierce, claims, "Scott's egotism has grown like Aaron's serpent," and says his career was marked by "envy and hostility" to superior officers. Scott was unable to hold the Whigs together, and they were decimated in the election by Pierce and the Democrats. And, while we can never know what type of a president Scott would have been, it's safe to say he couldn't have been worse than Pierce, and probably a whole lot better. $175.

The existence of slavery in the United States was the result of a compromise, permitted as a necessity to bring the South into the Union. Washington and Jefferson were Virginians, and slaveholders themselves, but neither was comfortable with the terrible institution. Their expectation was that it would fade away, but while it did in the North, it only became stronger in the South. By the time the founders had passed on, most in the South had become vocal proponents of slavery, rather than those who merely tolerated it in the expectations it would in time disappear. Nat Turner's rebellion had awakened southerners to the risks of prolonging slavery, and it was at this time that the last serious attempt by southerners to deal with this issue was made. Item 9 is The Speech of Henry Berry, (of Jefferson), in the House of Delegates of Virginia, on the Abolition of Slavery, published in 1832. Berry supported a plan that would set in place the gradual elimination of slavery the founders envisioned, but did nothing to promote. This plan would have freed all children born to slave parents after July 4, 1840. Berry calls slavery "a grinding curse" and a "cancer on the political body of the state of Virginia." Though he did not consider Turner's rebellion a major threat, he warns, "the time will come, when there will be imminent, general danger. Pass as severe laws as you will, to keep these unfortunate creatures in ignorance, it is in vain, unless you can extinguish that spark of intellect which God has given them." Berry's warnings went unheeded, and eventually, Virginia paid the price. $650.