A Catalogue of Catalogues from Frits Knuf Antiquarian Books 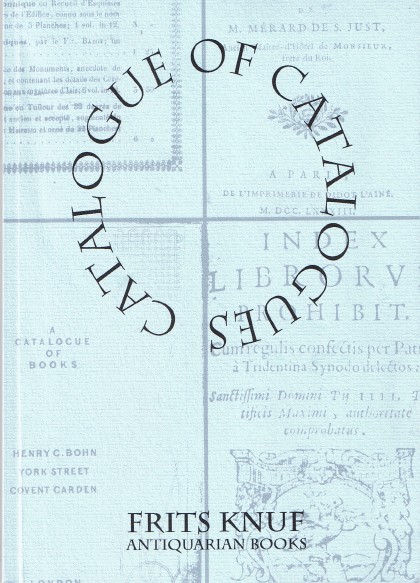 A Catalogue of Catalogues from Frits Knuf.

Frits Knuf Antiquarian Books has issued a Catalogue of Catalogues. There are all types of catalogues offered here, but nothing else - auction catalogues, bookseller catalogues, private and public library catalogues, even catalogues of forbidden books. Regardless of their original purpose, time turns all of these into unintentional bibliographies. They are a source of information about the books they list, often carrying descriptions, points of identification, history, and value. A catalogue of catalogues is essentially a book about books, which just happens to be Frits Knuf's specialty.

On the assumption that bigger is better, we will start with A Catalogue of Books, published by Henry Bohn in 1841. It was a mammoth undertaking, the largest book catalogue ever printed, at least at the time. It offered 23,208 books for sale, taking up almost 2,000 pages. It was divided into 27 headings and numerous subheadings, an obvious necessity when dealing with so many books. Bohn was a major London bookseller, publisher, and auctioneer of the 19th century, and many others, including Bernard Quaritch, learned the trade under his tutelage. This monster catalogue is now generally known as the "Guinea Catalogue," based on its original price. Item 55. Priced at €775 (euros, or approximately $1,110 in U.S. Dollars).

Edmund Curll was another major London bookseller, about a century before Bohn, but he did not carry the high reputation the latter possessed. He was, rather, a most dislikable fellow. His offenses were numerous, from publishing and selling pornography and trash, to publishing pirated versions of others' works, to selling fake medical cures in his bookshops. Curll was noted for starting controversies and then publishing both sides to sell more books. He did manage to spend some time in jail for publishing obscenities, and was the target of numerous lawsuits. His most famous battles came with the poet Alexander Pope, whose works Curll pirated and whose letters he published, including some Pope never wrote. Item 61 is one of Curll's catalogues from 1735, headed Books Printed for E. Curll, at Pope's Head In Rose-Street, Covent-Garden. A picture of "Mr. Pope" graces its cover. €1,050 (US $1,504).

So long as we are featuring the catalogues of scoundrels, item 107 is A Browning Library. A Catalogue of Printed Matter...Collected by Thomas James Wise. Published in 1929, a few years before his downfall, Wise was once a respected scholar, collector, and bibliographer. The problem was that Wise supplemented his income by producing fakes, and not just fake copies of known books, but faked copies of invented books by renown authors. So, while much of what he published was legitimate scholarship, one always has to watch out for mentions of his fakes. €350 (US $501).

Item 10 is the catalogue for an auction that never happened. It is the Catalogue des livres Du Cabinet De M. De Boze, published in Paris in 1753. The De Boze library, which included a 1462 Bible and 1457 and 1459 Psalters, was purchased en masse by two collectors who kept what they wanted and consigned the rest for sale the following year. €800 (US $1,146).