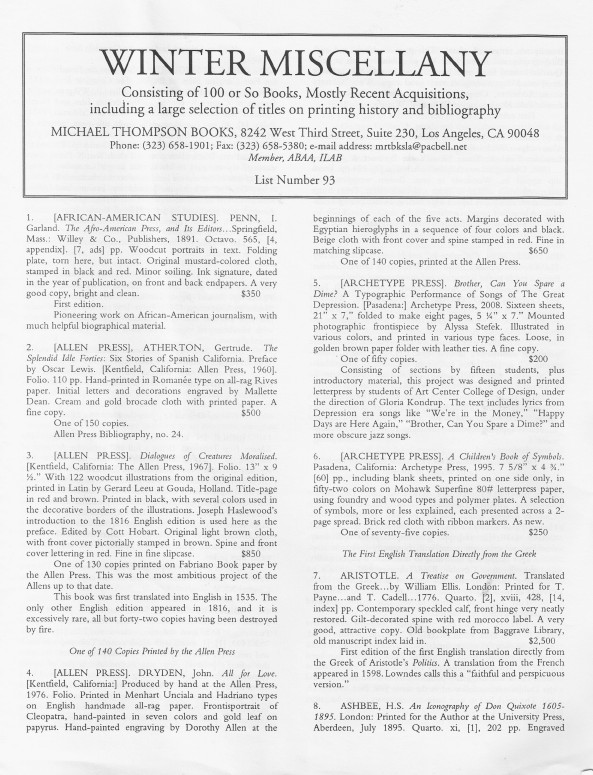 Michael Thompson Books has released a Winter Miscellany Consisting of 100 or So Books [Editor's note: 101], Mostly Recent Acquisitions, including a large selection of titles on printing history and bibliography. It's always easier for a reviewer when the title describes the catalogue, as it allows us to proceed directly to the books inside.

Item 28 is The Tides and Kindred Phenomena in the Solar System by George Howard Darwin. Darwin, like his grandfather and father, as well as his son, was a notable scientist. Not as notable as his father, Charles, who first promulgated the theory of evolution, but George was nonetheless an important astronomer of his time. In this 1898 book, he expounds on his theories about tides. This copy once belonged to, and bears the signature of, W.H. Bragg, who won a Nobel Prize in 1915 for an analysis of crystal structure by x-rays. Priced at $650.

From science of the very large, we go to science of the very small. Item 95 is the bound volume of the issues of the magazine Nature for 1953. This year's issues were significant, for it was in the April 25 issue that James Watson and Francis Crick announced their discovery of the structure of DNA, generally considered the most important biological advance of the 20th century. At the time, they noted, "it has not escaped our notice that the specific pairing we have postulated immediately suggests a possible copying mechanism for the genetic material." Indeed, just five weeks later, in the May 30 issue, they discussed the genetic implications in greater detail. Offprints of their articles were issued shortly thereafter, but the articles in Nature were the first printings of their discoveries. $3,250.

Item 35 is the last of a long and magnificent run. In 1919, Edwin and Robert Grabhorn moved from Indianapolis to San Francisco, where they set up shop as printers. Within a few years, they had become noted as the greatest fine press printers in the West, perhaps the entire country. For over four decades, they continued to print many of the most collectible fine press items ever published. However, in 1965, Edwin now 76 years old, Robert 65, they decided to call it quits. They closed down their shop, though Robert and much of their stock joined former employee Andrew Hoyem at what would become Arion Press. Item 35 is Alamos: A Philosophy of Living. This book, written Richard J. Elkus, contains 24 black and white photographs of Alamos, Mexico, taken by the author. Published in 1965, in a run of 487 copies, it was the last major work published by the Grabhorn Press. $450.

Item 34 is a fraud on a fraud. The title is Brother and Sister Sonnets, by George Eliot, something of a fraud him/herself ("George Eliot" was the penname of the woman writer Marian Evans Lewes). The book has a stated publication place of London (likely false) and a date of 1869 (certainly false). One of the tricks of the noted forger, Thomas Wise, was to take a work first published in a collection and create a separate edition with a date earlier than that of the compilation. Voila. He now had a "true" first edition, one previously unknown, and possessed by no one other than Wise. This item was evidently a forgery of the Wise forgery, as it differs in certain respects to the copies Wise created. $850.

Item 98 is the biography of a biographer, and hopefully a bit more accurate than the biographer was wont to write. It is Mason Locke Weems. His Works and Ways, by Paul Leicester Ford, published in three volumes in 1929. Weems was ordained a clergyman, hence he became popularly known as "Parson Weems," though he spent most of his career as a printer and author. Weems wrote biographies of several of America's early leaders, but the one he is most remembered for is that of George Washington. Weems was quite adoring of his subjects, so much so that he was given to flattery, exaggeration, and perhaps downright fabrication. The Weems story that has been told down through the ages is that of George Washington and the cherry tree. Weems claimed an old, distant relative relayed the story to him about how the six-year-old Washington, with a new hatchet in hand, had tried it out on a prized cherry tree. When his father asked young George if he was the perpetrator (to use some modern terminology), Washington replied, "I can't tell a lie," and then 'fessed up to the deed. His father, so taken up by his son's honesty, could only express his pride in his son's behavior. There is no other evidence to suggest such an event ever took place, and it seems unlikely, as based on his father's response, George would likely have chopped down every tree on their property. Author Ford was murdered by his brother in 1902, with this work finally being completed by his sister 27 years later. $450.

Michael Thompson Books may be reached at 323-658-1901 or mrtbooksla@pacbell.net. Their website is www.mrtbooksla.com.