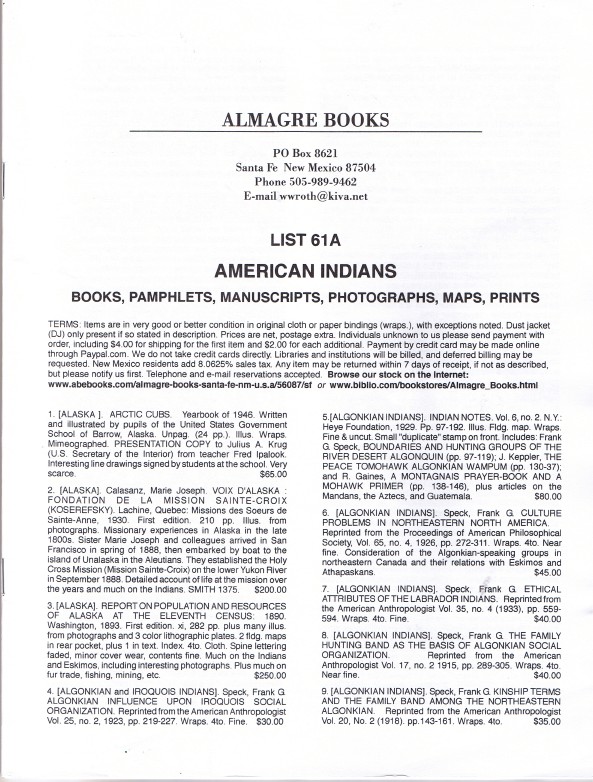 Almagre Books of Santa Fe has issued a catalogue titled American Indians. It contains almost 500 items pertaining to America's first inhabitants. Dozens of tribes are represented, as are printings of government treaties and other documents concerning the natives (many of which were means of taking more of their land). There are accounts of wars, removals from ancestral lands east of the Mississippi, captivities, and even some strange ways some less than honest businessmen tried to exploit Indian culture to make a fast buck. You won't find many cowboys in this catalogue, but it is filled with material for those interested in America's Indians.

Item 417 was a timely book: A History of the Sioux Agreement. Some Facts That Should Not Be Forgotten. This work by Thomas A. Bland was published by the National Indian Defense Association. While the Indians still had overwhelmingly bad press in the U.S., there were some people who saw the injustices they faced, Bland being one. He speaks of the forced assimilation to which the Sioux were subjected and the stealing of their land by the government to give to settlers and railroads. The timing of this publication was circa 1888, not long before the final Indian war in America, when a group of the Sioux was overwhelmed in the horrific Wounded Knee Massacre. Priced at $175.

George Bird Grinnell was one of America's greatest naturalists. He studied the wildlife and people of the plains for decades. He was the naturalist with General Custer in 1874, wisely opting not to rejoin him in 1876. Grinnell spent time with everyone from the Indians of the West to another notable conservationist, Theodore Roosevelt. Along with his studies of natural history, Grinnell particularly focused on the Cheyenne Indians, and in 1915 he published this book: The Fighting Cheyennes. It covers the wars in which this tribe was involved, starting in 1838 and including the Little Big Horn. Item 101. $225.

Item 252 is a Map Showing Indian Reservations Within the Limits of the United States... This map shows Indian reservations, pueblos, communities and schools, along with army forts, many no longer in existence, as of the 1890 census. Published by the Commissioner of Indian Affairs in 1892. $175.

Item 437 was one of the more interesting jokes/frauds perpetrated on the public: The Works of Sitting Bull in the Original French and Latin, with Translations, Diligently Compared. This item was created by Robert Dunlap Clarke, and evidently many people fell for it. Sitting Bull was a man of many skills, but speaking multiple European languages was not one of them. Clarke managed to convince many people that the great chief spoke French, Latin, Greek and German, and graduated from Oxford University. Clarke had served in the army at various forts in the West and had been on General Crook's staff, undoubtedly adding perceived authenticity to his claims. Offered is the 1878 edition, issued the year following the first. $1,750.