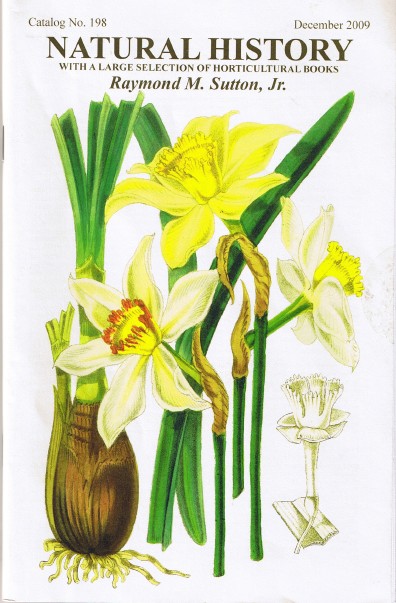 Raymond M. Sutton, Jr., has issued Catalog No. 198 of Natural History, with a Large Selection of Horticultural Books. If your collecting interests run to plants, animals, geology, paleontology, or just explorations, there are books guaranteed to pique your interest. Sutton has broken the catalogue down into sections on various classes of flora and fauna for convenience, helpful since there are almost 500 items offered. We will take a look at a few of them.

Item 3 is John James Audubon's Ornithological Biography, or an Account of the Habits of the Birds of the United States of America; accompanied by Descriptions of the Objects represented in the Work entitled The Birds of America... These five volumes dated 1831-1849 (actually 1831-1839) were published in Edinburgh. This set was intended to accompany the spectacular illustrations Audubon presented in his Birds of America. British copyright law required nine copies of a book be placed at various libraries, something Audubon could not afford to do with his expensive, colored illustrations. So, he published and copyrighted the text separately and gave it away with each set of illustrations. Priced at $8,500.

Item 9 is Johan Frederic Gronovius' Flora Virginica Exhibens Plantas Quas V. C. Johannes Clayton in Virginia Observavit Atque Collegit. Gronovius was a Dutch botanist who published this seminal work on the plants of Virginia in 1742. You might wonder how a Dutch botanist became so knowledgeable about the plants of Virginia. The answer is that Virginia settler John Clayton collected local plants and was in contact with several important European scholars, including Linnaeus as well as Gronovius. He shipped specimens to Gronovius, from which he prepared this book, apparently without Clayton's knowledge. $5,000.

Item 20 is Materia Medica Americana Potissimum Regni Vegetabilis, by Johann David Schoepf, published in 1787. This is the first book about American medicinal plants. Schoepf came to America as a Hessian soldier, serving as a surgeon for the British side during the Revolution. After the war, he stayed on, determined to study the flora, fauna, and geology of America. More than any other German of his era, Schoepf studied American natural history. He wrote numerous articles on varied related subjects, but his study of American medicinal plants is likely his most important contribution. $10,000.

Item 405 is a five-volume National Academy of Sciences' study on one of the nation's great natural disasters: The Great Alaska Earthquake of 1964. It was the most powerful measured earthquake in North American history, registering in at an astonishing 9.2. Enormous damage occurred in Anchorage and the surrounding area. Five minutes after it began, the tremors were over, but left behind was a wake of destruction and around 130 lost lives. A few people as far away as California died from the resulting tsunami. $150.

One would think (hope) that cannibalism is very rare, but perhaps it is more widespread than we thought. Item 468 is Among Cannibals, as account of four years' travels in Australia and of camp life with the Aborigines of Queensland, by Carl Lumholtz (1889, $175). Item 479 is A.E. Pratt's Two Years Among New Guinea Cannibals... (1906, $145). Item 465 is A. Lange's In the Amazon Jungle, adventures in remote parts of the upper Amazon River, including a sojourn among cannibal Indians (1912, $70). This last book was once the property of, and is signed by, Vermont Senator Ralph Flanders, who led the move to censure his Republican senatorial colleague, Joseph McCarthy, in 1954.

Item 441 is the Proceedings of the American Philosophical Society. Vol. 103, No. 5, published in 1959. The issue includes several articles on Charles Darwin, including Some Episodes in the Life of Charles Darwin, by Charles Galton Darwin. The author was the grandson of the better-known Charles Darwin, and a notable scientist in his own right, a physicist who participated in the Manhattan Project, developing the first atomic bomb during World War II. $30.

You will find many of Raymond M. Sutton, Jr.'s, books listed in "Books For Sale" on this site. Click here.