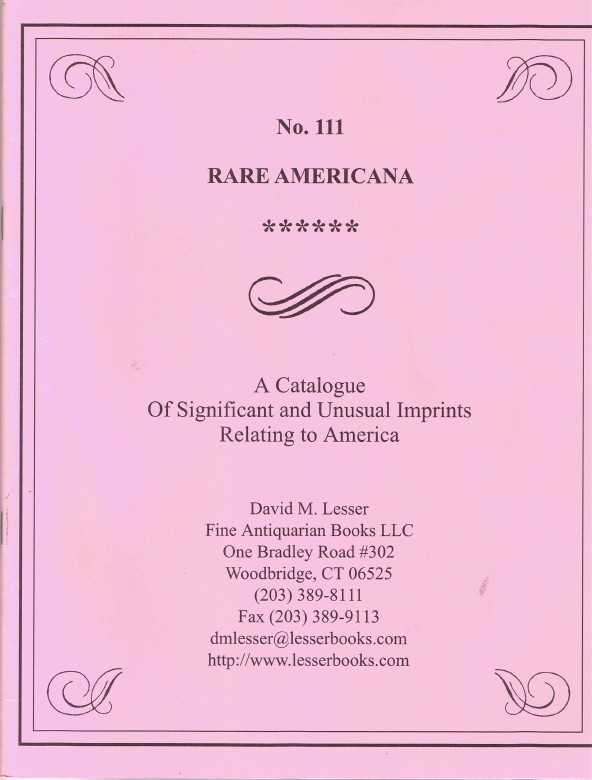 David M. Lesser Fine Antiquarian Books has issued their 111th catalogue of Rare Americana. Lesser specializes in "significant and unusual imprints relating to America," and there is much you don't see everyday to be found here. This issue includes a few uncommon but outstanding items written by Abraham Lincoln in his pre-presidential days. They provide great insight into the man. However, there are many other issues covered in these publications, from colonial times in America to Reconstruction and beyond. Here are a few of these pieces.

Item 73 is a 1797 first and "author's edition" of the most painful piece Alexander Hamilton ever wrote: Observations on Certain Documents... Hamilton was America's first Secretary of the Treasury, but he had been found by his opponents to be making payments to one James Reynolds. They immediately assumed he was involved in illegal speculation in government securities and publicly charged him with the same. Hamilton had no choice but to reveal the unpleasant truth behind his payments to Reynolds. He had been conducting an affair with his wife, and the money was paid to buy Reynolds' silence. Hamilton, himself, had this edition published to refute the charges of corruption. It is scarce today as his family bought up and destroyed as many copies as they could. However, his opponents republished the work in 1800 to discredit Hamilton in that election. Priced at $1,500.

Item 93 appears to be the first separately printed Lincoln piece: Public Lands in Illinois. January 17, 1839. Mr. Lincoln, from the Committee on Finance, Made the Following Report... At the time, Abraham Lincoln was serving in the Illinois legislature, a member of the young Whig Party and a strong proponent of public works. That may sound odd for America's first Republican president, but roles change over time. The Panic of 1837 threatened to bankrupt the state, but Lincoln was not about to back down from promoting public projects. States Lincoln, "We are now so advanced in a general system of internal improvement that...we cannot retreat from it without disgrace and great loss." Lincoln advocates purchasing unsold federal land within the state from the federal government for $5 million and reselling it to settlers for a profit. Illinois made such a proposal, but nothing came of it. Lincoln was a strong backer of the federal government taking a major role in improving the nation's transportation and other resources in the days before other issues became paramount. $7,500.

Item 95 is the Speech of the Hon. Abram Lincoln, in Reply to Judge Douglas. Delivered in Representatives' Hall, Springfield, Illinois, June 26th, 1857. Lesser describes this as "Lincoln's earliest significant speech." Lincoln lashes out at Douglas' "Popular Sovereignty" policy as "a mere deceitful pretense for the benefit of slavery," noting that Douglas looked the other way when pro-slavery forces stole the elections in Kansas. He then excoriates Douglas and other supporters of the Dred Scott Decision for their position that the Declaration of Independence and Constitution do not apply to Blacks. Says Lincoln, "In those days, our Declaration of Independence was held sacred by all, and thought to include all; but now, to aid in making the bondage of the negro universal and eternal, it is assailed, sneered at, construed, and hawked at, and torn, till, if its framers could rise from their graves, they could not at all recognize it." Speaking of the slaves, Lincoln adds, "All the powers on earth seem rapidly combining against him. One after another they have closed the heavy iron doors upon him, and now they have him, as it were, bolted in with a lock of a hundred keys, which can never be unlocked without the concurrence of every key." $4,500.

Item 94 is the Speech of Hon. Abraham Lincoln, Delivered in Springfield, Saturday Evening, July 17, 1858. Now preparing for his great debates with Douglas, Lincoln revisits his recent "House Divided" theme. While saying blacks are not equal to whites "in all respects," Lincoln claims the Declaration of Independence "does mean to declare that all men are equal in some respects; they are equal in their right to 'life, liberty, and the pursuit of happiness.'" That means "in the right to put into his mouth the bread that his own hands have earned, he is the equal of every other man, white or black." $2,750.

Barnabas Binney presented An Oration Delivered...For The Right Of Private Judgment In Religious Matters... at the Rhode Island College Commencement in 1774. Dr. Binney, who two years later would join the revolutionary forces as a surgeon, supported religious freedom and tolerance for all. He argues for, "a free, uncontrolled liberty of thinking, worshiping and acting in all religious matters." Binney also warns against, "that fountain-head of all wickedness, that Hydra-mischief, UNION OF CHURCH AND STATE." Item 7. $1,500.

You probably are familiar with the Know-Nothing Party, but here is the Platform of Principles of the New York Know Somethings, probably published in 1855. This group wasn't so much an opponent of the Know-Nothings as a spin-off. They shared the "Nothings" anti-Catholic yet anti-slavery views. They differed in that they supported acting in public, rather than conducting oaths and business in secrecy. The Know-Somethings opposed involuntary servitude in all forms except punishment for crime, and abhorred the Fugitive Slave Laws, which required northerners to turn over runaway slaves to their masters. Nevertheless, their attitude toward Catholic immigrants was hardly so liberal. Item 90. $950.