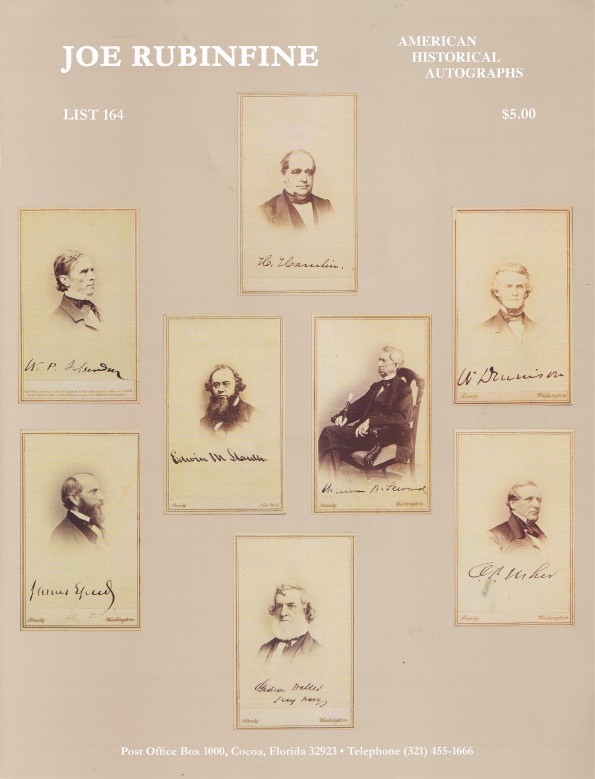 Eight from Lincoln's cabinet on the cover of Joe Rubinfine's latest catalogue.

Joe Rubinfine has issued his List 164 of American Historical Documents. Offered is a group of signed documents such as letters, photographs, and legal papers. Basically, they come in two forms. Some are documents signed by important American figures, such as Washington, Jefferson, Hancock, Jackson and Lincoln (two Lincolns including Revolutionary War General Benjamin Lincoln). Others come from ordinary people who witnessed extraordinary events. There is a long, and truly amazing recounting of one man's personal experiences in the Revolutionary War, who served all the time from the pre-Declaration of Independence Battle of Bunker Hill to the British surrender at Yorktown. Here are some samples.

John Hancock was a successful colonial businessman who became a major leader of the American Revolution, despite the great risk that created for his personal well-being. He served as President of the Continental Congress at the time of the outbreak of the revolution, putting his fiery words to action when he boldly signed the Declaration of Independence (the original Declaration was signed only by Hancock, as President of the Continental Congress). We regularly see the man's revolutionary side, but here is a side of Hancock we seldom see. Item 17 is a personal letter, dated June 9, 1778, written to his wife Dorothy "Dolly" Hancock. It was written while traveling to York, Pennsylvania, to a meeting of the Continental Congress after it was expelled from Philadelphia by the British. Here, the very human Hancock speaks of the terrible condition of the roads and bad weather, the health issues he suffered from for much of the later years of his life, and sends regards and love to a whole slew of people. To his wife, personally, he says, "Take care of yourself, pray mind your health. I will return as soon as I possibly can...I almost wish I had been excus'd. Kiss little John [his son] for me as often as you please...I will write you by every oppory." In recent years, some have depicted Hancock as vain and personally ambitious, but he risked great personal wealth to lead his countrymen to freedom and graciously accepted whatever role he was given when it was perhaps a lesser position than he hoped for. He was also known for being personally generous towards those in need. Now we also see he was a devoted family man and friend. It's hard not to appreciate this man whose name became a synonym for the word "autograph." Priced at $28,000.

Those photographs you see on the cover of this catalogue form an interesting collection. Item 26 consists of eight signed carte-de-viste photographs of people who served in President Lincoln's cabinet. There is Hanibal Hamlin, his first vice-president, William Seward, his Secretary of State, and Edwin Stanton, his second Secretary of War, along with five others. $15,000.

The 1860 election was certain to be a contentious one. The Republicans were nominating Abraham Lincoln, who, if elected, was likely to lead to the South seceding from the Union (as it did). The Democratic frontrunner was Stephen Douglas, but despite being a middle-of-the-road compromiser, he was still unacceptable to the South. Perhaps this is why American diplomat Carroll Spence inquired of former President Franklin Pierce if he might be interested in running again. As one of those "Northern men with Southern principles," Pierce had been able to draw votes from both regions in 1852. It seems dubious that Pierce could have pulled this off in the more contentious election of 1860, unlikely he could have defeated Lincoln in the North, but perhaps he would have stood a better chance than Douglas. However, Pierce was not a popular man by this time, and wanted no part of another run. "I thank you for the manner in which your friendship leads you to speak of me, " writes Pierce, "but I would not under any circumstances permit my name to go before the Convention..." He also had personal reasons in that his wife hated Washington and was perennially ill. "Mrs. Pierce was so much prostrated by the effects of the voyage and other causes that she has not had the strength to proceed..." notes Pierce. Item 32. $2,500.