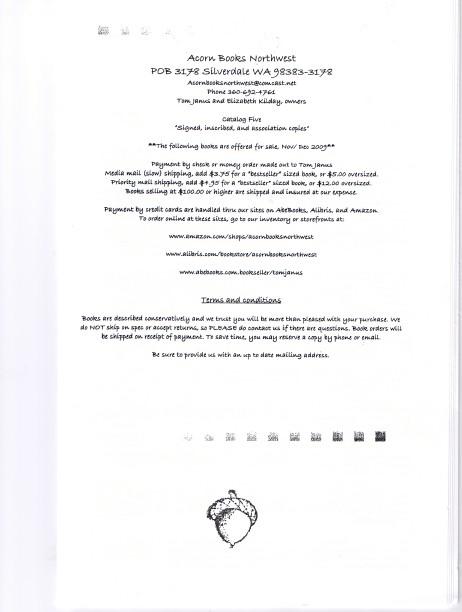 Acorn Books Northwest of Silverdale, Washington, has sent out their Catalog Five. Signed, Inscribed, and Association Copies. You will find books of fiction and nonfiction, with topics as diverse as one might find in a library. There are, however, two threads which connect these various books. One is the obvious connection mentioned in the title. They have been signed if not inscribed by their authors. The other common element is that these are recent works, almost all having been published within the past few decades. Many come from authors still active, perhaps a chance to collect their works before they (and their prices) peak. Others have recently concluded their careers. A few are not so much authors as artists, but their works are featured in books herein offered. Here are a few.

We will start with an artist who is no longer active, having passed on in 1984, but he is universally recognized as one of the greatest nature photographers ever. Ansel Adams is noted for his vivid natural scenes, taken in black and white, from Yosemite Park and other locations primarily in the American Southwest. Item 2129 is a first edition, first printing of Adams' 1979 elephant folio Yosemite and the Range of Light. It contains 116 of Adams' black and white photographs taken over decades of work at one of the world's most spectacularly beautiful sites. This copy has been signed on the half-title by Adams at Brentano's in Beverly Hills, one of his last public signings. Note: this is not the later Time-Life edition with a signed bookplate, but is a first edition signed on the page. Priced at $775.

One man who has been writing for 70 years and keeps on going is the mystery/science/fantasy fiction writer Ray Bradbury. Author of Fahrenheit 451, The Martian Chronicles, and so many more, his work has been translated to film, theater, and television as well. Item 1481 is a copy of The Halloween Tree, a 1988 15th anniversary reprint, signed by Bradbury. $60.

Charles Kuralt was a newsman with CBS for decades, a one-time hard news reporter. However, he made his greatest impact with a series of spots called On The Road on Walter Cronkite's long-running broadcasts. Kuralt would hit the road in his camper and travel all across America, particularly its backwoods locations, to provide stories about the nation and its people. It is those travels which inspired this 1995 book, Charles Kuralt's America. This is a first printing and is signed by Kuralt. Item 1240. $40.

Item 2241 is Graeme Base's The Worst Band in the Universe, replete with CD for those who would like to hear what the worst band sounds like (the CD is unopened, which is understandable since this is the worst band). The book is actually a children's work, a story about a band competition in outer space where worst is best. This is a first American edition, from 1999, signed by the author. $37.50.

Here is a man who might be the singer/songwriter for the worst band in the world, though we won't say whether by "worst" we mean so in the traditional sense or the previous title's synonym for best. Rod McKuen is best known as a very popular, if not always critically acclaimed poet, as well as song writer/singer. He has given us familiar titles such as Jean, Seasons in the Sun, and the obscure but unforgettable When Oliver Twist Meets the Duke of Oil. Item 2404 is The Songs of Rod McKuen, a first printing from 1969, inscribed in 1990 by the writer. $75.

Item 2507 is a 2001 first printing of Puget Sound Ferries. From Canoe to Catamaran, by Carolyn Neal and Tom Janus. These ferries are critical to transportation in the area as they never got around to building many bridges up there. This copy is signed by the authors, and who knows, you might even be able to wheedle an inscription out of Mr. Janus, since he and Elizabeth Kilday are the owners of Acorn Books Northwest. $36.50.

Acorn Books Northwest may be reached at 360-692-4761 or Acornbooksnorthwest@comcast.net.