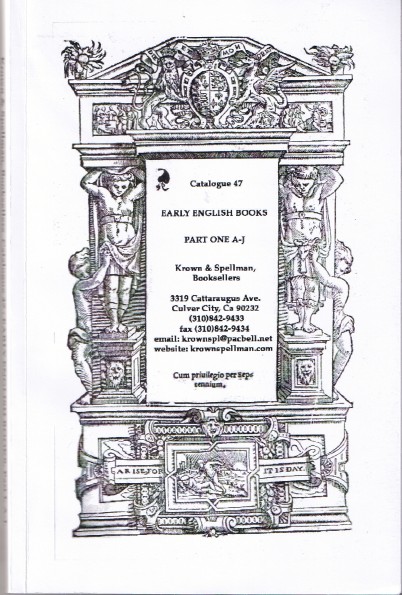 This month we have received our first catalogue from Krown and Spellman, Booksellers, of Culver City, California. However, they are hardly new to the trade, having been in the book business for over 30 years. Krown and Spellman can certainly be described as an "antiquarian bookseller," as they specialize in titles printed before 1750. With such early books, it could be hard to fill the shelves with just items printed in America, so what we have here is a collection that might otherwise be unexpected for a California seller: Catalogue 47. Early English Books. Part I, A-J. This catalogue is filled with works about the issues of the day 300-400 years and more ago. England was a very different place then. Scholars argued theology, theologians debated witchcraft, physicians practiced primitive medicine, people were executed for their beliefs, and people behaved badly with members of the opposite sex (well, that last one hasn't changed all that much). Here are a few of the early English books you may find today in sunny California.

Item 64 is a 1664 second edition of Robert Boyle's Some Considerations Touching the Usefulness of Experimental Naturall Philosophy. Boyle was one of the greatest minds of the 17th century, a chemist, physicist, student of medicine, philosopher, and theologian. He is generally regarded as one of if not the founder of modern chemistry. However, it may be his attitude toward science that was his greatest contribution. He was an empiricist, a follower of the scientific method who reached conclusions based on what he saw. That might seem obvious today, but back then, the standard was to figure things out "rationally," and if what seemed to be rational conflicted with what you saw, then it must be your eyes that deceive. Boyle was rational enough to see past that. Priced at $1,850.

Here is a book that is definitely dated: Panacea; Or The Universal Medicine, Being A Discovery of the Wonderfull Vertues of Tobacco Taken in a Pipe, With Its Operation and Use both in Physick and Chrurgery. It seems hard to believe now, but back in 1659, when this first English edition by Giles Everaert (Gilles Everard) was published, tobacco was not only thought not to be harmful, but something of a cure-all medicine. The 1587 first Latin edition of this work was the first book devoted entirely to tobacco. Everard thought the curative powers of tobacco were so great that "...the very smoke of it is held to be a great antidote against all venome and pestilential diseases." Today tobacco is recognized as, if not the cause of all of these diseases, a contributing factor to a great many. Item 172. $1,750.

Item 210 is an unusual title from a man who might seem a contradiction by today's standards: Sadducismus Triumphatus: Or, full and plain Evidence concerning Witches and Apparitions. Joseph Glanvill was a tolerant and humane man as well as a believer in scientific investigation. Nevertheless, he was also a believer in witchcraft, and his views were employed by Cotton Mather and others of less noble purposes in Salem, Massachusetts. However, Glanvill's belief in witches was based more on a belief in the spirit world, in turn based on the Bible. As evil spirits were mentioned in the Bible, he believed their denial amounted to a denial of the Bible and the existence of God. So this otherwise scientific investigator became bound to argue that witches were real, supporting his claims with "scientific" evidence taken from people who had claimed to observe witchcraft. Offered is a second edition from 1682. $1,250.

Speaking of the supernatural, item 142 is The History Of The Life And Adventures Of Mr. Duncan Campbell, A Gentleman who tho' Deaf and Dumb, writes down any Stranger's Name at first Sight: with their future Contingencies of Fortune. Evidently, the deaf and dumb Mr. Campbell managed to convince people of means that he possessed supernatural powers, so they came to him for readings, willingly paying the soothsayer whatever he demanded. This 1720 book has been attributed to either Daniel Dafoe or William Bond. Dafoe wrote at least one other title about Campbell. Dafoe is best known for his novel Robinson Crusoe, though he wrote reams of other not as well regarded material along the way as he sought to make a living. This book was published by Edward Curll, the notorious scandalmongering London publisher/bookseller. $750.

Krown and Spellman, Booksellers, may be reached at 310-842-9434 or krownspl@pacbell.net. Their website is found at www.krownspellman.com.