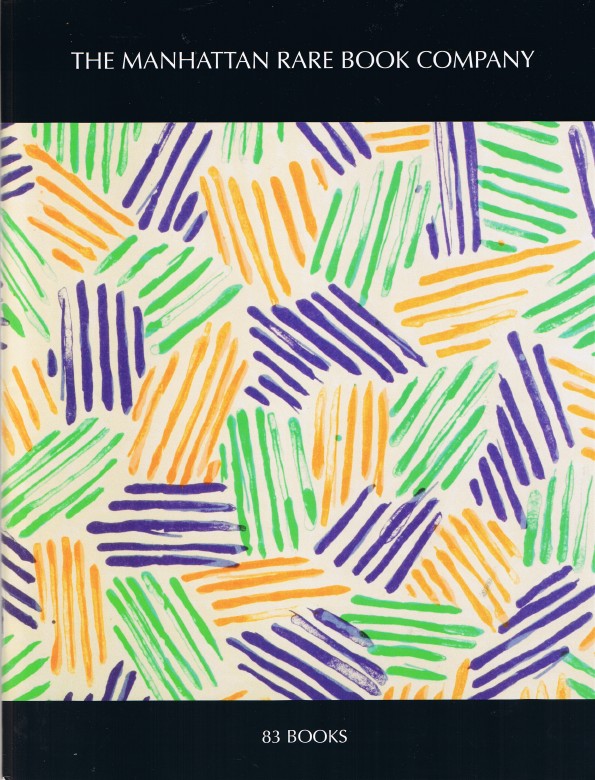 The Manhattan Rare Book Company has issued a catalogue with the simple title 83 Books. That's what it contains. No particular type of book is featured, other than important ones in exceptional condition. There is literature, art, photography, history, science, politics, economics, poetry, and children's books represented. The Manhattan Rare Book Company focuses on special copies of books in many fields, and this latest collection fits well with that mission.

We will start with a book that could be applicable to current times. Item 2 is Looking Forward, a book written by Franklin D. Roosevelt and published in 1933, shortly after he became President. Writes Roosevelt, "We need to correct by drastic means if necessary the faults in our economic system from which we now suffer." Well said. This copy is from the fourth printing of the first edition and is inscribed by Roosevelt to Charles D. Hart of Philadelphia, who was a very active supporter of the Boy Scouts. Priced at $3,500.

Item 30 is a book concerning the era about which Roosevelt wrote, a fictional account that rang all too true: The Grapes of Wrath. John Steinbeck's 1939 novel recounts the travails of a Depression-era family from Oklahoma, as they attempt to survive the worst of times. $7,000.

Here is one more item that pertains to economic challenges, as well as political ones. It is a collection of 19 acts of Parliament between 1764 and 1776. It includes the Intolerable Acts and others that upset the colonists living in America at the time. England logically should have been starting an era of good relations with the colonists, the two having combined a year earlier to defeat the French in the French and Indian War. However, the British felt it was time for the colonists to start bearing more of the financial burden, while the colonists vehemently rejected being taxed by a Parliament in which they had no representation. Starting with the Sugar Act of 1764 and the Stamp Act of 1765, relations between the two began on a downward spiral that would lead to revolution a decade later. Offered are first editions of these 19 acts, taken from the Sessional Volumes of Statutes printed by the Crown Printer for distribution to Members of Parliament and other officials. Other acts in the collection are the Quartering Acts of 1765 and 1774, which forced colonists (and Massachusetts in particular) to house and feed British soldiers, the Townsend Acts which led to the Boston Tea Party, and the Intolerable Acts of 1774 designed to punish Massachusetts for the Tea Party, but which instead had the effect of turning the colonists to outright rebellion. Item 44. $85,000.

Item 35 is a wordy book. In fact, it contains 40,000 different ones. It is a first edition of Samuel Johnson's A Dictionary of the English Language. It was not the first dictionary, but it was the first one produced on such a monumental scale. Despite limited resources, Johnson managed to come up with these 40,000 words along with 114,000 quotations from the past two centuries to demonstrate their meanings. Eight years in the making, this first modern dictionary was published in 1755. Thanks to his friend and admirer Boswell, Johnson is more likely remembered as a wit than a lexicographer, but this was clearly the achievement of his life. $28,000.