Pocket and Other Maps from Bernard J. Shapero Rare Books 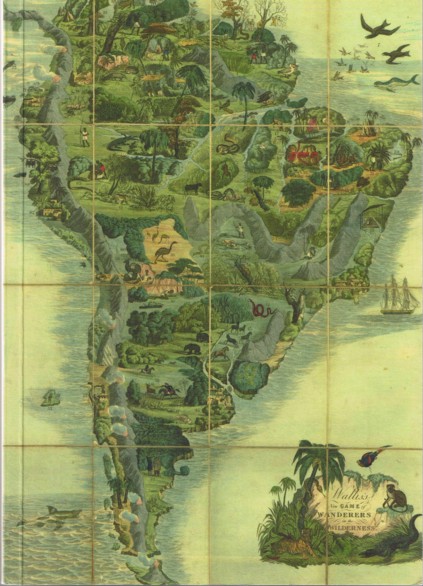 Maps are featured in this latest catalogue from Bernard J. Shapero Rare Books.

Bernard J. Shapero Rare Books has issued a new catalogue entitled The World In Your Pocket. We will let them explain the meaning of this somewhat obscure title: "Between these covers you will find maps that can be carried in a case, slipped into a pocket, folded as a handkerchief, or used as a board game or playing cards." This is a catalogue of maps, all published separately, and they cover territories as large as the Earth and as small as a particular city or county. There is a large collection of county and town maps from England, and another extensive selection of maps that appear on playing cards. Here are a few of the other maps you will find within.

The catalogue starts with the spectacular Map of the World in a globular projection exhibiting Particularly the Nautical Researches of Capn James Cook... This is an updated 1799 edition of the Aaron Arrowsmith map first published in 1794. This map shows the world in two half globes, one for each hemisphere. Added to the map are the routes taken on Captain James Cook's three voyages, which provided Europe with much of its knowledge of the Pacific, including Australia, the west coast of North America, and many of the Pacific islands. It was also Cook who determined there was no massive Antarctic continent as previously believed. Each voyage is shown by a different colored line, with the last one changing from blue to black in Hawaii after Cook died. Arrowsmith was a leading cartographer of his era and the founder of a line of mapmaking Arrowsmiths who followed. This map notably shows the American Northwest, which he would reproduce in a separate more detailed map, as it was known just before Lewis and Clark set out on their travels into the territory. Priced at £20,000 (British pounds, or roughly $33,230 in U.S. Currency).

Here is a very different world map: Zoological Map of the World, showing the geographical distribution of animals. Each continent is filled with representative animals. So, for North America, we find notable native species, including bald eagles and turkeys, bison in the west, alligators in the south, bear and dogs, raccoons and pigeons, and beaver, valued for their pelts back in 1844 when this map was published. For Africa, we find lions, giraffes and camels, India has elephants, and Australia features kangaroos and the odd duck-billed platypus. Item 7. £1,500 (US $2,492).

Item 67 is A View of the Grampian Mountains, a 78-inch long panorama of these Scottish mountains. It was prepared by James Knipe (who has signed it) in 1875, but was based on a similar panorama by James Gardiner from 1820. The panorama was likely reprinted at the time for the tourist trade. With mountains rising as high as 4,400 feet, some difficult to climb, this would have been a place for visitors to get away from civilization. £3,500 (US $5,815).

Item 10 is a more original map by James Knipe, an 1858 second edition of his Geologic Map of the British Isles. The title is a slight understatement, as Knipe has also included the geology of northern France. Knipe worked under the patronage of Prince Albert, to whom the map is dedicated. Included on the map are numerous geologic cross-sections of areas in the Isles and France along with a key in English, French and German. £1,500 (US $2,492).

Item 129 is Lloyd's New Map of the United States the Canadas and New Brunswick... published in 1863. This map is focused on railroads and stations, so the western U.S., southern Florida, northern and western Canada are cut off, as this predates the transcontinental railway and roads into these areas. This edition must have come out after a bad experience by the mapmaker in Cincinnati, as he has appended the following note to his map: "Burnett House Cincinnati, the O[wner] has no respect or attention is shown to guests, except when their bills are presented. The Proprietor spends most of his time gambling, caring little for the comfort of his guests." Burnett House actually had a reputation as a luxurious hotel, but must have had a bad day when Lloyd stopped by. £1,500 (US $2,492).

You will find many of Bernard J. Shapero's books listed in "Books For Sale" on this site. Click here.